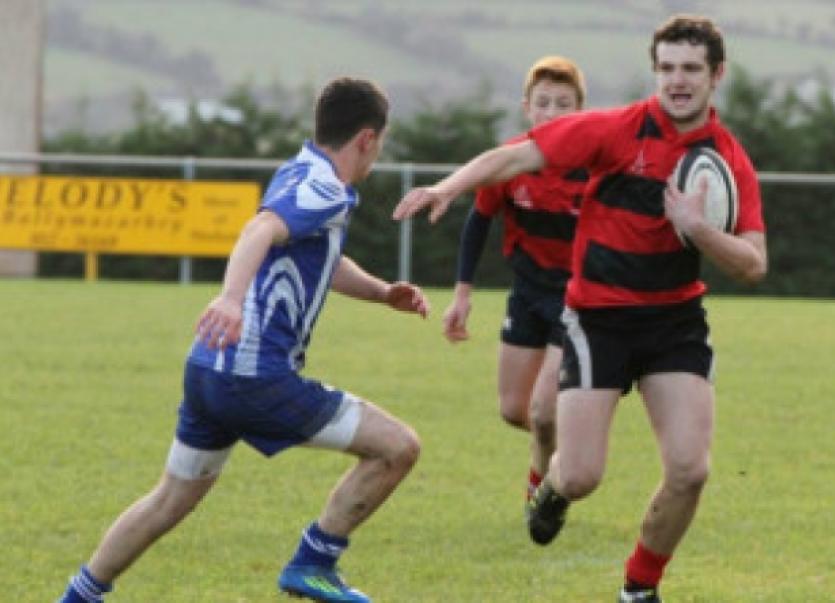 Clonmel High School took a step closer to the Munster Schools Senior Cup last Friday at Clonmel RFC when they beat a very strong St. Clements side from Limerick city 18-14.

Clonmel High School took a step closer to the Munster Schools Senior Cup last Friday at Clonmel RFC when they beat a very strong St. Clements side from Limerick city 18-14.

In good playing conditions, the home side began well, applying a lot of pressure in the opening quarter. Yet St. Clements’ defence held firm and the early exchanges suggested this was going to be a tight affair.

The opening score came midway during the first half when High School outhalf Dylan Cadogan chased his kick down the wing and beat the defender to score in the corner. This rattled the Limerick side and the High School kept the pressure on with good work from scrumhalf Josh Pickering and centres Shay van Dam and Luke Noonan. In the pack, Ethan Mulvee, Kenny Liew and Joe Keane were rucking well. Cadogan kicked a penalty to leave the half time score 8–0.

St. Clements began the second half in a more determined fashion. Their big forwards got more involved and pushed the High School back into their 22. But the Clonmel lads tackled everything. Sean Hahessy, Ronan Brady and Matthew Caulfield were dogged in defence. Full back Luke Boland was having his best game in a High School jersey and made a try saving tackle to deny St. Clements their first try.

After soaking up the pressure, High School worked their way down the touch line and were eventually awarded a penalty which Cadogan converted. The reply from St. Clements was instant as they scored a try and conversion to leave them 11–7 behind.

With the game in the balance, High School held their nerve. A big kick down field had the St. Clements’ defence scrambling and Luke Boland won the race to score the all-important try. Cadogan kicked the conversion to make the score 18–7 with ten minutes remaining.

The Limerick school threw everything at the High School for the remainder of the match. Wingers Niall Barrett and Johann Oosthuysen showed great courage in the tackle, while Andy O’Keeffe, Eoin Breen and Brandon McGuire worked very hard around the ruck. St. Clements scored a late consolation try to give the High School an 18–14 victory. This was a very clinical and physical performance form the High School. Their attitude and spirit is commendable as they faced down a much fancied St. Clements team.