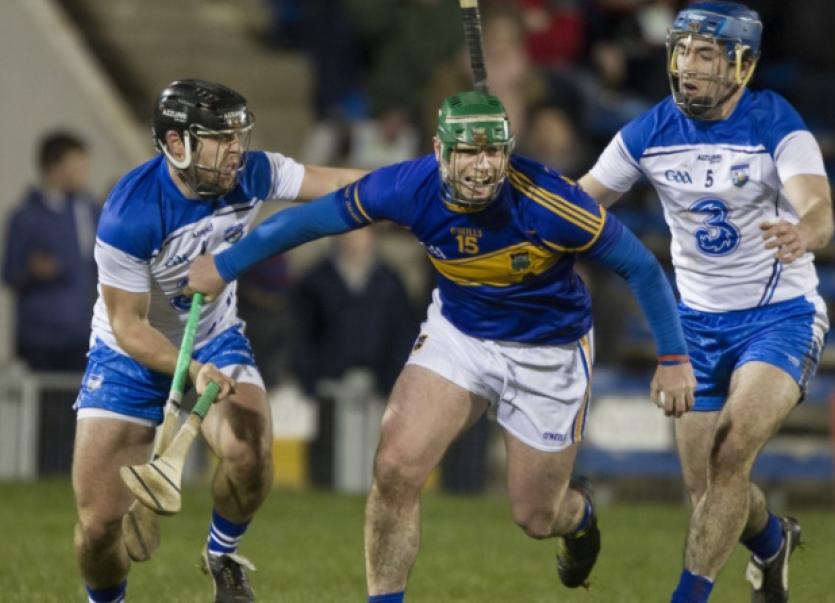 Seldom has a victory felt more like a defeat.

Seldom has a victory felt more like a defeat.

The two league points were an essential dividend but the performance itself left fans feeling deeply downcast.

It was a default win owing most to Waterfordâ€™s generosity. Expect no such gifts next Sunday when we head back into the lionâ€™s den that is Nowlan Park.

After the uplift of the Waterford Crystal victory this was regression of a worrying type. Itâ€™s a case of one step forward and two backwards. A thoroughly flat performance from Tipperary, underscored by forward failure, saw us stumble to victory. Nobody but Waterford would have let Tipperary off the hook in this manner.

Iâ€™m sure somebody will remind me, though offhand I canâ€™t immediately recall a Tipperary team scoring a mere two points from play during thirty five minutes of hurling - yet that was our fate in the first half last Saturday evening. Actually correct that: Iâ€™ve just had a flashback to a Nowlan Park game in the late eighties where we scored something like four points in the entire match, much to the delight of Joe Hennessy as I recall.

Anyway the focus of most worry on Saturday evening was our offensive end, a zone where we struggled to gain any worthwhile traction throughout the game. Itâ€™s the same old story which seems to recur: our inability to win primary possession in attack. We have plenty of light-touch players but few playmakers who can win the hard ball.

Kieran Bergin was added to the attack with this failing in mind and he did reasonably well early on before being drafted outfield in the second half. Players like John Oâ€™Dwyer and Jason Forde are the great white hopes of Tipperary hurling but they have yet to deliver a consistent impact at this level. Including Paddy Murphy our entire full forward line was replaced on Saturday evening.

But it would be wrong to focus only on the newcomers because the older hands werenâ€™t impacting as required either. Vice-captain, Noel McGrath, was a towering leader for Loughmore in last yearâ€™s championship yet for Tipperary he retains a more ethereal presence flitting in and out of the action with little cameos of excellence. One such input set Callanan up for our first goal. The man from Drom had a nondescript first half but then delivered a precious 1-2 from play in a ten-minute salvo to effectively swing this game our direction.

Our midfield was patchy too, Woodlock eventually replaced and Brendan Maher going half forward, a move that reaped no benefit to the team. Most credits were reserved for the defence where Mickey Cahill was once again sublime. Cathal Barrett took his chance admirably â€“ a little impetuous in fouling at times but overall looking well up to the demands of this level. The jury stays out on Oâ€™Mahony at full back as it is on Paudie Maher at centre, though the number six played a strong game on Saturday. Shane McGrath and Conor Oâ€™Brien ensured that our half back line was effective and overall our defence wasnâ€™t the problem.

It will be interesting to see how Oâ€™Shea and company digest the evidence and what remedial action will be taken for the trip to Nowlan Park. Thereâ€™s talk that Paddy Stapleton may be ready for a return after injury and could find himself sited at number three which would release Oâ€™Mahony for a return to centre with accompanying adjustments to the flanks.

Midfield struggled on Sunday but James Woodlock and Brendan Maher are probably still seen as our best option in this area. Most interest will focus on whatever realignment will take place in attack. I thought Denis Maher did okay when introduced on Saturday and Liam McGrath, despite his critics, showed more commitment than several of the starters. As a minimal requirement we need forwards who have the stomach for battle. Iâ€™m not sure whether Corbett, Kelly or â€˜Bonnerâ€™ Maher are ready to return yet but isnâ€™t it a sign of the times when weâ€™re wistfully glancing in their direction.

Kilkenny had half a dozen newcomers on board at Ennis last Sunday but I suspect the fall-out from their defeat will mean a more reinforced line-out for our visit to Nowlan Park. They wonâ€™t wish for a second defeat, especially not to Tipperary, so expect a stiff challenge to maintain their edge on us Noreside.

In response I expect a reformed Tipperary at Nowlan Park. If the requirements of this clash donâ€™t lift the side then we are indeed in trouble. Games this time of year tend to be patchy with performance levels dipping and rising on given days so for the moment Iâ€™ll take the optimistic view that Saturday was a one-day dip and weâ€™ll see something more elevated next Sunday. It may not be enough to bring home a win but itâ€™s the performance that will be important.

Looking at the broader canvas I must admit to some disappointment at Eamon Oâ€™Sheaâ€™s after-match comments, which seemed to be dismissive of the league. Before the Waterford Crystal his stated focus was on the league opener against the Deise and now the lens is aimed at June 1 and the championship game with Limerick. Itâ€™s always a future focus dismissing whatâ€™s immediately in front of you.

I disagree. The league is very important for Tipperary and the focus should always be on the next game. Traditionally league momentum has been vital for Tipperary come championship time so I get slightly edgy with anything that tends to be dismissive of the springtime series. Wasnâ€™t Jim McGuinness very dismissive of the football league last year and look where that led Donegal. This time he has a different outlook. And you wonâ€™t hear Cody talking down the league.

Speaking of the Kilkenny manager leads on nicely to the issue of red and yellow cards and their usefulness in hurling. Eddie Keher has suggested their abolition and Cody lends his backing to the proposal. The stated motivation for both men is this perception that hurling is being drained of its physicality and they want a return to more manly times.

What annoys me is the way this Kilkenny agenda is being afforded credibility, with the Association president urging a debate and the possibility of some sort of review body to examine the state of hurling. All of this comes after a year when, by general consensus, hurling as a spectacle hit unprecedented heights. Imagine if we had a poor year!

Cards are for the benefit of spectators and to enhance the overall presentation of games. If you want to bring us back to the dark ages then why not suggest bringing back the bishop to throw in the ball as well.

A female columnist in a Sunday paper went to extraordinary lengths to add more credibility to the Kilkenny suggestions. Far from plugging their own agenda, Kilkenny, we were told, have been the victims of physicality with the Michael Rice injury being cited as evidence, conveniently ignoring the accidental nature of that unfortunate incident. And how about this: Kilkenny have injured nobody in recent times. So, Lar Corbett broke his own ribs in last yearâ€™s league final!