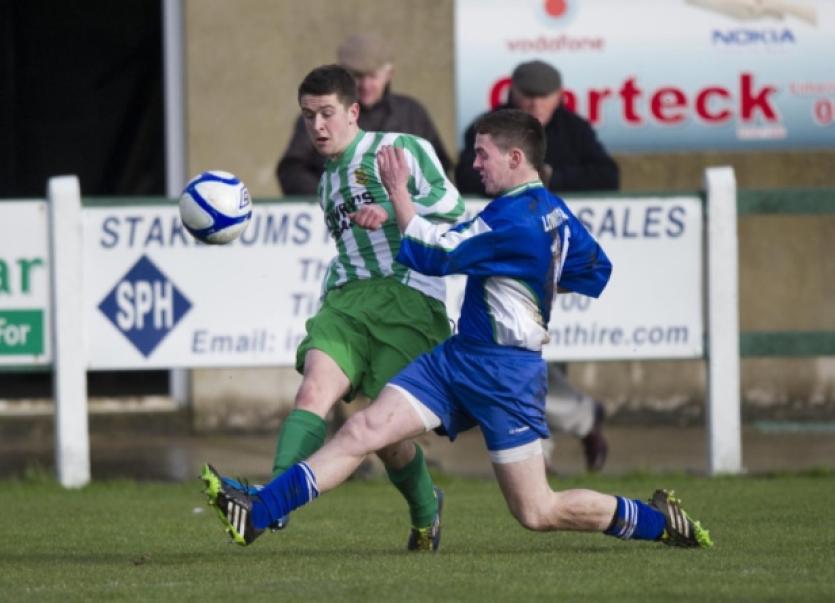 There is speculation around the league that Clonmel Celtic midfielder Dwayne Burns is on his way out of Junior football to join the League of Ireland, and if that is true, then he gave a master class on Sunday as a parting shot, scoring four goals and powering Celtic to another good win as they concentrate on retaining their league title from last season. It only took Celtic seven minutes to get off the mark here when Seanie Oâ€™Hara fired home, and just before the quarter hour mark, Paul Kennedy doubled their advantage with a well taken header. But good as both these goals were, they were only the prelude to a man of the match performance from Burns, when he scored his first on the half hour, to be followed by two more on the other side of the break in the 55 and 56 minute, to complete his hat trick.

Kevin Waters then got a wonderful goal with a first time volley from outside the box nestling in the top corner of the Cahir goal before the keeper had time to move, but the final act of the game was left to Burns, as he capped his performance with a fourth goal five minutes from time, to leave the home side bruised, battered and beaten.

A prolonged heavy downpour prior to kick off affected the top surface for this game, and made it touch and go whether to start or not, but when the game did kick off, both teams took time to settle and the opening period turned out to be a scrappy affair.

Top striker Barry Ryan came closest to scoring for Town in the 14th minute when his shot was pushed around the post, to keep the scores all square. Shortly before the break, Richie Crowe had a shot deflected over the bar for the hosts, as they tried to get an opener before the break, but Cashel held firm and they went in honours even.

Town started the second half in the ascendancy and were on top without creating many chances, until the 65th minute when a Keith Cashman low shot crept into the corner of the net for the gameâ€™s only goal.

Seven minutes later, Cashman headed home from close range but the goal was ruled out for a foul in the build-up. With a quarter of an hour left, Cashel suffered a further blow when one of their defenders was shown the red card for a poor tackle on Shane Flynn, but they regrouped and very nearly equalised three minutes later when Evan Comerford had to make a great save, pushing a Paul Hoare shot on to the post, which rebounded to safety.

Town pressed on for the remainder of the game but could not force a second goal, happy in the knowledge that the three points won keeps them very much in the hunt at the right end of the Premier League table.

Freezing conditions by the Tower bore witness to a Titanic struggle between two teams scrapping for every point lest they slide beneath the surface of Tipperary Premier football by the end of this season. Villa, struggling of late, got off to a stormer of start with two goals inside the first ten minutes, the first a cool finish from Noel Kent from close in with the second a rasping strike from outside the box by Pippy Carroll.

Undeterred however, and well up for the battle, the Bridge reduced the lead to one with a goal from a header by Stephen Kearns on the half hour, but Kent restored the home sideâ€™s two goal cushion before half time with a delicate lob over the stranded visiting keeper.

Villa then looked to have the points wrapped up five minutes into the second period when Carroll scored his second to make it four goals to one, but if anything, the home side began to falter and Bridge caught them cold on the hour with a second strike.

Ten minutes later the Thurles outfit were rocked back on their heels as the Clonmel lads cut the lead to the minimum and it looked like they were spoiling for at least a share of the points.

Despite a hectic last 15 minutes nonetheless, and despite both teams having clear chances at either end, there were no more goals, and Villa picked up a priceless three points to take them clear of the relegation zone after the weekend.