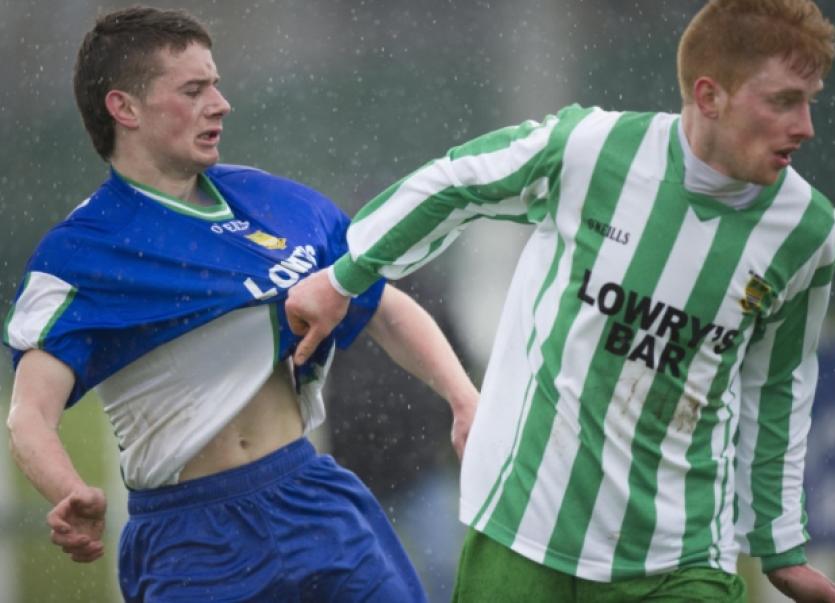 Though most would never admit it, every second team in the league probably wish for a cup tie crack at their first team counterparts at some point, but the reality is when it happens, it rarely goes anywhere but to form.

And so this was the way the â€œSt. Michaelâ€™s Derbyâ€ went on Sunday, as the first team carried on their unbeaten season against their own seconds to advance in the Tipperary Cup.

Right from the beginning the first team went about their business, and were awarded a second minute penalty when Seamus Kinnane took down David Slattery, but goalkeeper Peter Mulhair saved well pushing the ball around the post.

More chances went abegging before the score was opened somewhat luckily, when a shot by Irish international Paul Breen which looked to be going wide, was deflected past a despairing Mulhair.

Within a minute though, the lead was doubled when David Slattery finished off a cross from Jimmy Carr, and this put the home side into cruise control, which they remained in right to the break.

Whatever hope the seconds had of getting back into the game, were snuffed out right from the kick off, when in the first attack of the half, Denis Peters was adjudged to have fouled Richie Ryan and Paul Tobin made it 3-0 to the hosts from the penalty spot.

Russell Quirke made it four on the hour mark, but the reserves never gave up and got a consolation goal from the spot when Brian Lowry sent his namesake Mark the wrong way just before the finish.