Football chairman is â€˜ambitiousâ€™ for game in county 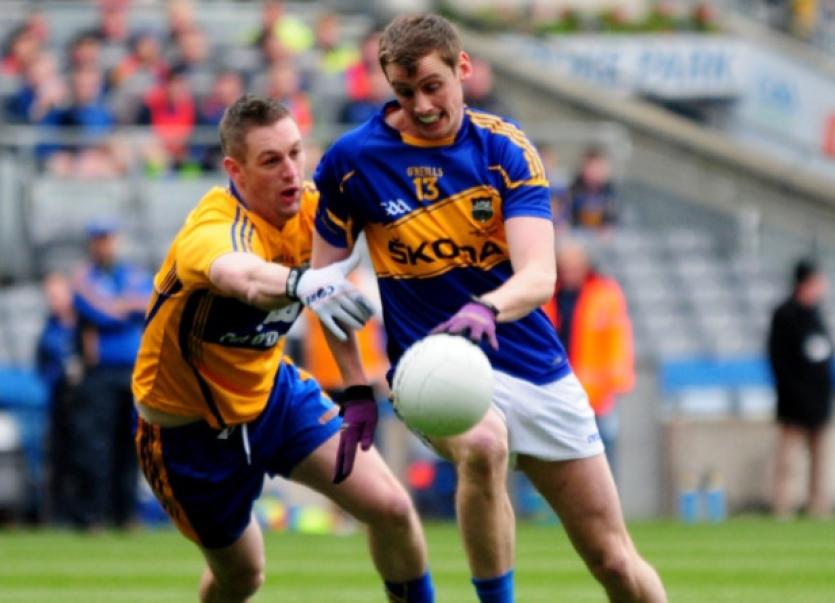 Following Tipperaryâ€™s Division Four final win over Clare at Croke Park on Saturday last there was an upbeat mood amongst officials and players.

Following Tipperaryâ€™s Division Four final win over Clare at Croke Park on Saturday last there was an upbeat mood amongst officials and players.

County Tipperary Football Board chairman, Joe Hannigan, was greatly encouraged by the win by a side whom he described as â€œmuch better than Division Four quality.â€

In a brief overview of where Tipperary senior football now stands, the Shannon Rovers clubman said:

â€œWeâ€™re looking forward. Weâ€™re trying to build a team thatâ€™s going to be capable of contesting for Munster â€¨honours and contesting All-Irelands. Itâ€™s 20-20 vision as the saying goes. Itâ€™s great to see some of the younger players coming into the squad from the minor team of 2011. We plan to try and create a panel that is capable of contesting with Cork and Kerry in Munster and I think we are getting there.â€

On the game itself and the great spirit and dogged determination of the teamagainst Clare, he said of the Tipp squad...

â€œThey are a great bunch of boys. All very honourable guys, they have worked hard for one another, thereâ€™s some little thing about those guys, they are special, in my opinion, they are special, all quality players. In their lives as well they are good guys. It stood out there today. We have leaders and the mindset is right in that squad of players to go to the next level and we are looking forward to that.â€

â€œAnd we are looking forward to playing Limerick in the Championship now. Thatâ€™s a big day for us. To get a win in the Munster Championship that would be massive and, of course, being away to Cork. Who knows if we get past Limerick what can happen. Weâ€™re ambitious,â€ added the chairman.

Man of the match and â€¨Division Four top scorer Conor Sweeney was delighted with the success.

â€œIâ€™ve won nothing at senior level and Iâ€™ve been on the panel since 2010. We definitely wanted it todayâ€ said the Ballyporeen sharpshooter who amassed a whopping 6-49 over the course of the eight games.

When asked about his own personal performance and his scoring tally, the 24 year-old replied.

â€œI got a lot of scores alright but more so from being in the right place at the right time. The hard work was done out the field. It probably wasnâ€™t one of my better games, I wouldnâ€™t be happy with it myself. But we got the result and I suppose I chipped in with a few scores which is vital as well, but overall I was just pleased with the result.â€

Of playing in Croke Park itself, the atmosphere and the occasion...

â€œI played there before a few years ago. I played senior football in a championship here against Dublin and that was an experience in itself. This is one of the best stadiums in the world no matter what sport you are talking about. Itâ€™s such a pity we donâ€™t get up here more often.

â€œIn fairness from the start you put it (Croke Park) to the back of your head and you get going. I definitely think it had a small effect at the start. I think we were doing things we never would have done, dropping the ball, shooting from angles we wouldnâ€™t normally shoot from. I suppose we all just wanted to impress so much. I think we went back to doing the simple things straight then. Look, we came away with the win and that was the important thing.â€

About the upcoming championship match against Limerick, Conor answered.

â€œYou canâ€™t beat the buzz of winning and I think itâ€™s â€¨vital we won today. We wanted to win today just to keep that winning streak going. And weâ€™ll train hard now for four weeks and keep the head down,â€ he added.

Eire Og Annacartyâ€™s Brian Fox, like Conor Sweeney, was delighted with the win but not overly excited about his or the teamâ€™s overall performance.

Half-jokingly he said â€œI thought I could probably be going off at half-time so I said to myself I better get going for the second half. I wasnâ€™t going too well at all but in the second half one or two balls came my way that werenâ€™t coming my way earlier. So I said I better do something. I started running at them a bit more and it worked because when I did run at them it drew a few fouls and we got the scores.â€

On the year to date, the ever-roaming and ever hard-working wing-forward said:

â€œWe are happy enough the way things have gone. You canâ€™t be overly happy with the performances today. We have certain aspects still to work on. But if they had said at the start of the year we would get promoted and then win the Division Four final we would have taken the arm off them. That was our goal at the start of the year; that is what we wanted to do.â€

Brian, who had no complaints with the referee who disallowed his scorching second half â€œgoalâ€ was full of praise for all fellow West Tipp men. All had contributed to the campaign and he singled out Aherlowâ€™s CiarÃ¡n McDonald who is now back and â€œwho is such a big player for us.â€ But Andrew Morrissey, the Arravale Rovers boys (Kiely, Leahy and Mulhair) and the Grogans are all so important, â€¨added Fox.

In relation to the championship, like all the others county players, Brian acknowledged that itâ€™s time to focus on Limerick.

â€œItâ€™s only four or five weeks away. Weâ€™ll draw all our attention to that now. The next few weeks will be intense as we try and build it up for Limerick. Itâ€™s so important to get a result. We need to get a win in the Munster championship,â€ concluded the Annacarty man.