Another joust with Kilkenny is ideal preparation for the championship 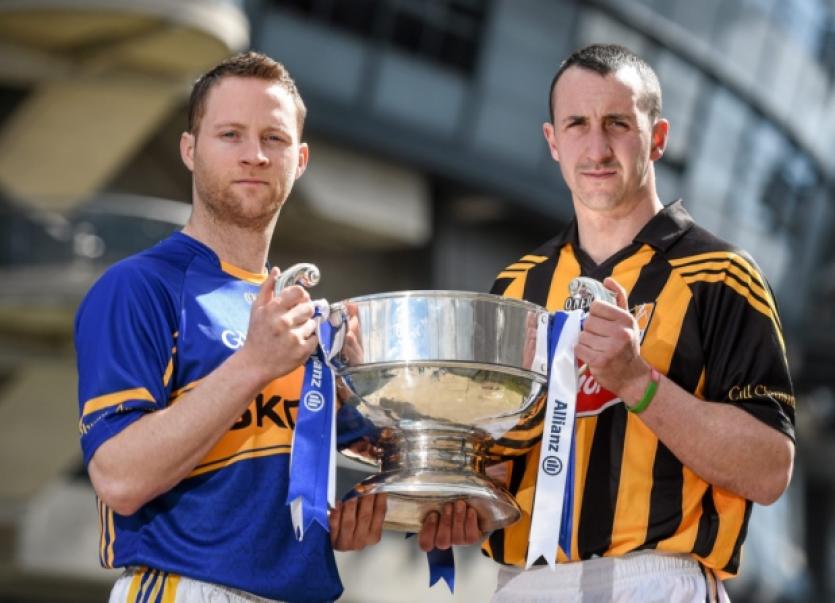 Sundayâ€™s National League Final against Kilkenny is the best possible game that Tipp could have at this time, says assistant manager Michael Ryan.

Sundayâ€™s National League Final against Kilkenny is the best possible game that Tipp could have at this time, says assistant manager Michael Ryan.

And he believes it will â€œmirror very closelyâ€ what theyâ€™ll face when they entertain the holders Limerick in the Munster Championship semi-final in Thurles on June 1.

Tipperary now find themselves in an identical position to last year - preparing for a League Final against Kilkenny, followed by a championship meeting with Limerick. Defeat in both matches in 2013 means theyâ€™re determined not to make the same mistakes twelve months down the line.

â€œItâ€™s not that we deliberately underestimated Limerick but we got it wrong this time last year and specifically in this period between the League Final and playing Limerick whatever number of weeks later. Weâ€™re highly aware that weâ€™re moving into a very important period for ourselves.

We felt we lost something in that period and I think you shouldnâ€™t. But you can fall into some kind of a false sense that youâ€™re playing at a certain kind of level, which we were at this time last year, playing the League final against Kilkenny. Thatâ€™s as good a level as you can play at that point. I think what happened after that is that we lost our continuity and we didnâ€™t pick it back up in time for the challenge that we got in the Gaelic Grounds â€“ and paid a fine priceâ€.

Tipperaryâ€™s particpation in Sundayâ€™s final has surprised many, not least their own supporters who were even contemplating a relegation battle following successive defeats against Kilkenny, Clare and Galway. Neither did Michael Ryan anticipate that they would be in the League decider, saying they didnâ€™t look ahead at any time because they were in the middle of â€œa mini crisisâ€.

â€œWe had nowhere else to go other than play what was in front of us, keep our heads down and go through our work.I say crisis flippantly because we didnâ€™t see it as a crisis. We were just in the middle of a league programme and would have liked to have been getting it easier in terms of our results but it wasnâ€™t happening for us. Being honest, we didnâ€™t falter. The work continued and we believed we were on the right track.

We got a little bit of luck. It could have changed against Dublin in Thurles and thankfully it didnâ€™t and weâ€™ve moved on.

We had something like 17 new bodies that we looked at over that period and we were very anxious to use them. I think we used 31 players or thereabouts over the League and thatâ€™s vital. You have to find out about guys. Itâ€™s not that itâ€™s over, that weâ€™ve found out that theyâ€™re not good enough or anything like that. But itâ€™s just a point in time that weâ€™ve gotten a chance to use them and we were glad to use them. But the (poor) results hurt, we wonâ€™t tell you liesâ€.

Through those dark days earlier this spring Eamon Oâ€™Shea said he was confident that Tipp would turn the corner and his confidence has so far been vindicated. Had the team management team felt under pressure before that crucial game against Dublin, which they narrowly won to advance to the quarter-final?

â€œJust bear in mind that I drive down to Kilkenny every day to earn a living five days a weekâ€, says Michael Ryan. â€œIâ€™ve very good friends down there and I get worse in the tea-room in Kilkenny than anything that was felt around Tipperary and I get it daily! Look, no, we never felt under pressure to be honest. We didnâ€™t because knew we were on the right road.

I think there was frustration around the county and you just accept that because we love our hurling here.

You directly represent the bunch you manage so you have everyoneâ€™s interests at heart. Let me say it wasnâ€™t by any means an act.

We were disappointed with it. No, there was no panic. But if you had gone down that road, yes, I think you would have found yourself in a pretty big mess if your players lost confidence in what we were doing, weâ€™d have a huge problemâ€.

Their third defeat in that worrying sequence, against Galway in Salthill, was followed by raised voices in the dressing-room after the game.

â€œIt wasnâ€™t a realisation that things werenâ€™t going right. It was just that we werenâ€™t able to find our levels. We were very happy with our performance levels in terms of training and what we were seeing on the pitch. But we werenâ€™t able to get it out onto the playing field when we were playing, particularly against Galway. That was frustrating for us all and as you say the dressing room walls are thin.

But anyone who has either been in charge of teams or within teams, dressing rooms are charged affairs. Theyâ€™re not for the faint-hearted. Youâ€™ll be told a few home truths from time to time and we all need to hear it. Thereâ€™s an occasion when you need to say it as well and we are no different.

Look, guys care. This hurt us. We didnâ€™t plan any of those poor results. That was probably the worst up in Galway. In the other ones (Kilkenny and Clare) we were the architects of our own downfall somewhat in terms of coughing up poor goals and poor defending, but the overall performance in Galway was poor.

He said that the structure of the league now meant that there was very little margin for error in the competition.

â€œWe could just as easily have been down playing Waterford in the relegation decider, only for the result against Dublin. We set out to go and win that match and we didnâ€™t get involved in anything in terms of where we needed to be after it, nor should we. You shouldnâ€™t burden your players with that kind of stuff. We just about came out on the right side of that lineâ€.

On the injury front he said that Sundayâ€™s game will come too early for Lar Corbett but that they were hoping heâ€™d come into the reckoning for the championship game against Limerick.

â€œItâ€™s a problem at the back of his knee. Itâ€™s not a structural thing, itâ€™s not ligaments and itâ€™s not cartilage. Heâ€™s seeing the top guys and we remain very positive that weâ€™ll have Lar in the near term. If heâ€™s available for the championship weâ€™ll be thrilled, if not, the show goes on. Itâ€™s as simple as that.

Liam McGrath picked up a hamstring injury on the training camp in Clonea, Darren Gleeson has a slight quad strain. Noel McGrath got a knock on his shoulder but he has responded very wellâ€.

On Kilkenny, Michael Ryan had this to say - â€œThey have introduced quite a number of players and from looking at some of these guys they look to be at the level. Now, you know, on one level youâ€™d say theyâ€™re spoiled for choice and they have introduced three or four new guys that are right there and the other guys havenâ€™t gone away, nobody has retired. Not being close enough to it, I think time will tell whether the new guys will push the older guys out. Itâ€™s a very normal situation. But yeah, Kilkenny are Kilkenny. I donâ€™t fear for their standard of hurling or anything!

I donâ€™t think itâ€™s critical that this bunch of (Tipp) players beat them. We have an opportunity to play them on Sunday and really none of the stuff thatâ€™s gone before matters. Itâ€™s on the day, itâ€™s your performance and itâ€™s always your performance. I think we can look at every one of our last games with Kilkenny and I think the first thing we have to do is say that we didnâ€™t get to where we needed to be. Itâ€™s a cliche but itâ€™s not about them, itâ€™s about what weâ€™re going to bringâ€.