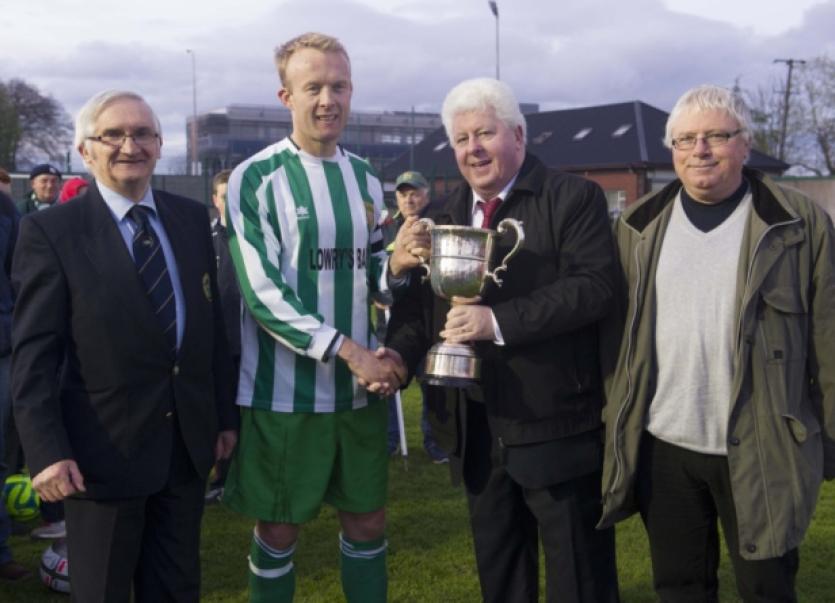 In what seems like a never ending series of important games for the Saints, they finally clinched their first piece of silverware of the season.

In what could yet end up as an historic quadruple, St. Michaelâ€™s defeated an already relegated Old Bridge to be crowned this seasons Premier League champions, at Cooke Park last Wednesday evening.

After the highs of FAI and Junior Cup success, this almost seemed like an anti-climax, but everyone at the club felt that above all this was the most important trophy they will lift this year, confirming their return to the summit of Junior Football in the county.

It was however for long periods a workmanlike performance, and despite being relegated the Old Bridge were in no mood to simply roll over and hand the title to the home team.

St. Michaelâ€™s had the better of the early exchanges but were often over-elaborate and it took almost 20 minutes before Pa Quinn had their first shot in anger, and that went harmlessly wide. It was however a portent of things to come, and six minutes later, Michael Ryan crossed to the back post, where David Slattery headed the ball down into the path of Quinn and he made no mistake from close range.

This goal settled the home side, to a point where they became almost careless at times and twice from set pieces late in the first period, they had goalkeeper Mark Lowry to thank for keeping them in front with good saves from two well worked Old Bridge set pieces.

The second half however, started like the Saints management team had some harsh words for their players during the break, and St. Michaelâ€™s came out like a team possessed, being very unfortunate not to double their lead within the first 30 seconds, when a mistake in the middle of the field was latched on by Colin Bargary who released Slattery to shoot narrowly wide.

Slattery was then very unfortunate not to score ten minutes later, when a powerful header cannoned off the crossbar.

But eventually, the creaking away defence was breached in the 56th minute, when Saints captain James Walsh went forward for a corner, and found himself at the end of a goalmouth scramble to poke home from less than two yards out.

Two minutes later, all hopes of a revival were snuffed out, when substitute Thomas Fahy crossed from the left and Pa Quinn left the goalkeeper stranded to put his side three goals up.

This more or less ensured victory and it became a one way procession towards the away end from there on in, even if the Saints werenâ€™t able to add to their tally.

At the end, James Walsh accepted the Premier League trophy and in an emotional speech, thanked not only his fellow players, but the whole back up team, the playersâ€™ families and supporters, and all who were a part of this success for the famous Tipperary town club.

Their credentials as Tipperary champions now endorsed, the Hoops will move on to new pastures in pursuit of glory for the rest of this unbeaten season.

St. Michaelâ€™s next big fixture is on 10th May when they take on Geraldines FC at Jackman Park Limerick in the Munster Junior Cup final. They also have finals to come in the Tipperary Cup and the FAI Junior Cup at the Aviva Stadium at the end of May.