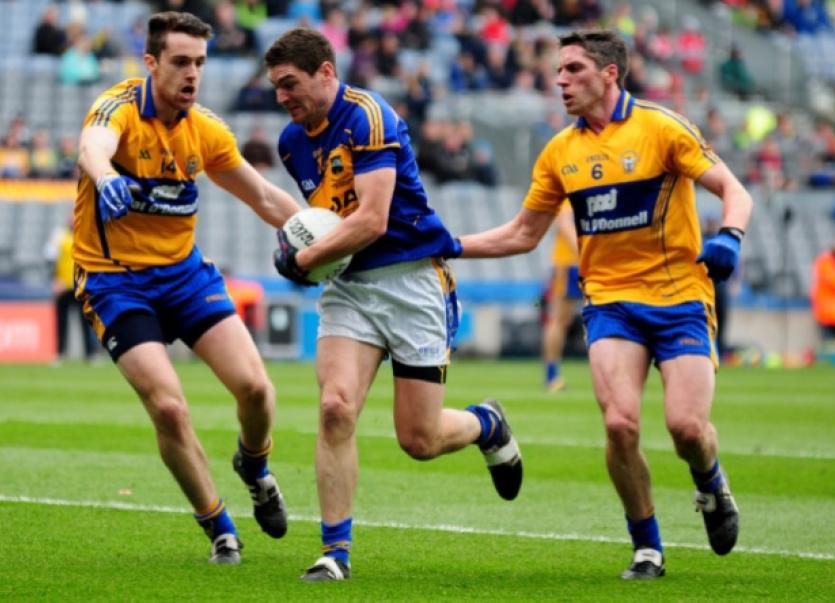 The Jonesâ€™ Road decider with Clare was an end-of-campaign shoot-out for silverware â€¨between two sides already-promoted. Seven weeks earlier they had met in the regulation league game at Semple Stadium where Tipp shaded a hard-fought battle by four points . It was arguably Tippâ€™s best performance of their campaign and its result was the giant-step towards eventual promotion.

This latest re-match wasnâ€™t expected to be anything but another battle, and for once the pundits were spot on. From start to finish it was tit-for-tit tight and nine times over the course of the 70 minutes the sides were level â€¨before Tipp edged it in the end by the bare minimum.

But it wasnâ€™t as good a display from either side as the day in Thurles. The effort and commitment were a constant but the football wasnâ€™t at the same level. Indeed Tipp played better in quite a few of their fixtures over the seven-game league programme. But Saturday last was also very different, it was a national â€¨final and it was in the rarified and almost ghostly atmosphere of Croke Park. What mattered most was the result and full credit to Peter Creedonâ€™s side, they won the day and they brought home the cup. You can always put on a better performance the next day, but there may not be â€¨silverware on offer. Carpe diem. And Tipp did just that.

This decider was point for point in the opening exchanges with the sides level three times by the 13th minute; Tippâ€™s scores coming from Conor Sweeney, Barry Grogan (free) and Ian Fahey, cancelled by two from Shane McGrath and one from David Tubridy.

With Clareâ€™s Gary Brennan on top at midfield their forwards were in good supply and further points from the â€¨ever-threatening McGrath and Tubridy put â€˜The Bannerâ€™ two clear before Sweeney had a good goal chance deflected over by the Clare keeper.

Tubridy tacked on another free before Tipp responded emphatically. Ian Fahey, doing great work around the middle, fielded magnificently and began a move which resulted in a goal. Peter Achesonâ€™s blaster was initially stopped by De Loughrey but man-of-the-match Conor Sweeney, the â€¨divisionâ€™s top scorer, was there to tuck home the rebound. It put Tipp a point to the good at 1-4 to 0-6.

And it was still the bare minimum at the break 1-7 to 0-9. Tipp added three points from Barry Grogan, the excellent Robbie Kiely at wing-back, and George Hannigan with Clareâ€™s three replies from Tubridy (free), Ciaran Russell and â€¨Cathal Oâ€™Connor.

Tipperary werenâ€™t happy going in at half-time just a point ahead having had a strong breeze but more so having kicked eight wides, some of them over-ambitious by players somewhat overawed by the occasion.

Inside two minutes of the restart Clare were level for the fourth time via Shane Hickey, and after Barry Grogan and Jamie Malone swopped two more white flags, Tipp were dealt a hammer blow.

A swift 43rd minute move worked its way through the field and Martin Oâ€™Leary got around the Tipp rearguard and blasted high past an â€¨otherwise untroubled Paul Fitzgerald. Clare were now 1-11 t0 1-8 up and worryingly had the wind to their advantage.

Tipp responded magnificently when it mattered on the big stage and had it back level by the 51st minute with points from Conor Sweeney (two) and Barry Grogan.

Something special would be needed to separate these sides and it came from â€¨Creedonâ€™s switches. The introduction of Seamus Grogan, Ciaran McDonald and senior debutant Colin Oâ€™Riordan gave Tipp fresh legs and the confidence and resolve to believe and drive on. All made valuable contributions. Late on Oâ€™Riordan, and a quieter than normal Michael Quinlivan, made huge catches and possession-winning interventions for Tipp, leading to points from Sweeney which shaded the verdict.

Seamus Grogan, took a black card in the 69th minute and was replaced by â€¨Conal McCullagh.

Footnote: Tippâ€™s starting 15 came from 13 different clubs, 14 including the subs. There was no player from county champions, Loughmore/Castleiney.