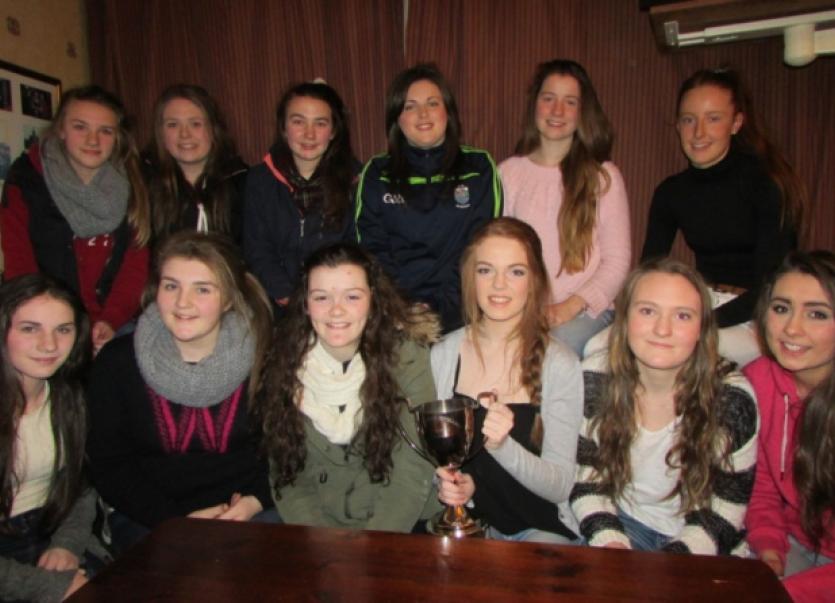 A celebration night for Cahirâ€™s championship winning lady footballers was a great success, at the weekend.

A celebration night for Cahirâ€™s championship winning lady footballers was a great success, at the weekend.

Last Saturday night in the Shamrock Lounge Cahir Ladies Football Clubâ€™s U16A County Champion Team was honoured for their achievements in 2014. The U16s retained the championship in 2014 beating Moyle Rovers in the final. The medals were presented to the girls on the night by local celeb, Andy Moloney in a celebration night which was attended by parents, trainers and supporters.

Congratulations were extended also to Roisin Howard and Aisling Moloney who were part of the Munster Schools Inter Provincial Schools squad.

A special presentation was made on the night to John Murphy who was appointed as one of the referees for the First Primary Inter Pros series at Kinegad last Saturday. John is the clubâ€™s first referee to represent Cahir Ladies Football Club at secondary school level and the club congratulates him on this achievement too.

Congratulations were extended also to ColÃ¡iste DÃºn Iascaigh on winning the Munster Senior A schools title. The club wishes all involved the best of luck in the All Ireland semi final and the club also wishes Aisling McCarthy and Emma Buckley the best of luck in the upcoming Ashbourne Cup (camogie) and Oâ€™Connor Cup (football) were they will represent the University of Limerick.

Chairman of Cahir Ladies Football Club, Liam Shinnick finished off proceedings by thanking Cllr. Andy Moloney who presented on the night, the team and trainers for their achievements and commitment, parents and supporters for their loyalty, the P.R. team and Margaret and Hughie who always look after them. A great night was had by all!