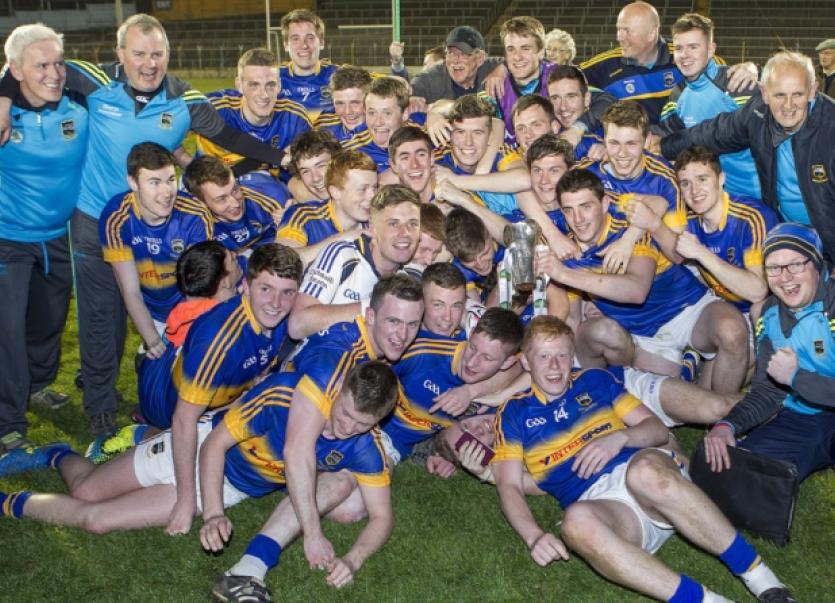 First and foremost letâ€™s call it as it is right now. Tipperary â€” Munster Under 21 Football Champions for 2015. Full credit to all involved. Period.

First and foremost letâ€™s call it as it is right now. Tipperary â€” Munster Under 21 Football Champions for 2015. Full credit to all involved. Period.

For only the second time in the 53 year history of the Championship, Tipperary are provincial champions, and deservedly so. On Thursday night last at Semple Stadium, Thurles, they produced a superb display of football, matched with a never-say-die attitude, brim-full of â€˜Premierâ€™ pride, to deny Cork a record five-in-a-row.

Against all the odds Tommy Toomeyâ€™s side, led by an inspirational performance by team captain Colin Oâ€™Riordan, prevailed at the end of a heart-stopping 60 minutes. Deservedly they were to get their hands on the â€œCorn na CÃ¡scaâ€ again, emulating Tipperaryâ€™s only previous win in 2010 when Tipperary defeated Kerry in Tralee.

Before a somewhat disappointing crowd of 2,137, Tipp and Cork faced up to each other in a third consecutive final and for the fifth time in nine years. With all previous deciders having gone Corkâ€™s way the bookmakers had â€˜The Rebelsâ€™ hot favourites. They, like many others, were in for a surprise.

From the outset the home side went about their business and with both Colin Oâ€™Riordan and Steven Oâ€™Brien fielding majestically around midfield the supply to the forward line was plentiful.

After 11 minutes Tipp were 0-3 to no score to the good with points from Jason Lonegan, Kevin Oâ€™Halloran (free) and Paul Maher.

Indeed one of the highlights of the final was the performance of corner-forward Kevin Oâ€™Halloran. The Portroe man, seemingly plucked from football obscurity, was making his Tipperary debut on the night. Over the hour he would kick six points - five exquisite frees in a sweet-striking style. His introduction by the management in a Munster final was a gamble that reaped rich rewards on the night.

By 18 minutes Tipp were six points clear at 0-7 to 0-1 and in full control. Cork had to wait until the 12th minute for their opening point when Darragh Murphy scored but four points in-a-row from Josh Keane (free), Steven Oâ€™Brien, Paul Maher and Josh Keane again gave Tipp a nice cushion.

The expected Cork awakening came and with half-time approaching the lead was back to four. A brace of points by lively corner-forward Cathal Vaughan including a free, and another by Sean Oâ€™Donoghue were debited by a superb point from play by Kevin Oâ€™Halloran. The Portroe man was not just a free-taker.

Cruising to the break, Tipp were rocked in time added on. A high ball delivered in to the square wasnâ€™t adequately dealt with by the Tipp keeper and Peter Kelleher took full advantage. So much of Tippâ€™s good work had been undone in a flash and all they had to show for great first half industry and endeavour was the meanest of leads - 0-8 to 1-4.

Under the Old Stand, before he allowed the team off the pitch for a break, Captain Oâ€™Riordan rounded his troops. Gesticulation alone sent out a clear message. â€˜We are not leaving this behind us tonight - this is our patch and no one takes it from us here.â€™

If the sucker punch of a goal before the break tested Tippâ€™s spirit, a second goal by Kelleher 20 seconds after the re-start would surely break spirt, heart and soul all combined. A one-time six points advantage was now a two-points deficit. Surely Cork would achieve the â€œdrive-for-five,â€ now.

The response was quick and a pair of hard-earned frees by Oâ€™Riordan and Bill Maher were both converted by Oâ€™Halloran. Parity restored five minutes in.

Cathal Vaughan edged the Leesiders ahead once again with a free but Bill Maher, growing into the game as it wore on, forced another free which Oâ€™Halloran eased over the block spot to level.

The gameâ€™s decisive score came in the 45th minute. A great blockdown in defence by Josh Keane was accurately kicked-passed to Liam Caseywho in turn found Ian Fahey. The Commercials man drove past his marker and his thunderbolt shot proved too hot for Michael Martin to hold. Goal!

The chance of a second goal soon followed but Josh Keaneâ€™s effort came back off the crossbar. Fortunately Oâ€™Riordan was on hand to mop up the loose ball and take the point. The same player then finished off an Ian Fahey-Oâ€™Halloran move to put Tipp five clear with eight minutes to go.

Desperately Cork emptied their bench and significantly one of their subs came to the fore. Points from Cian Dorgan and Cathal Vaughan were cancelled by an excellent effort from Jason Lonergan and another Oâ€™Halloran free. Still five up with five to go. Happy days!

But you never get to the end of any Cork team. Two minutes from time sub Cian Dorgan â€¨goaled and with time hitting the 60 minutes Brian Oâ€™Driscoll with a free narrowed it to the minimum.

Cork were to get one last chance in time added-on when Dorganâ€™s late high effort took an age to fall left and wide of the upright. Sean Joyâ€™s full time whistle brought exactly that for Tipperary. Fortune had favoured the brave. Tipp were Munster champions and deservedly so with each and every one heroes on an historic night at Semple Stadium.