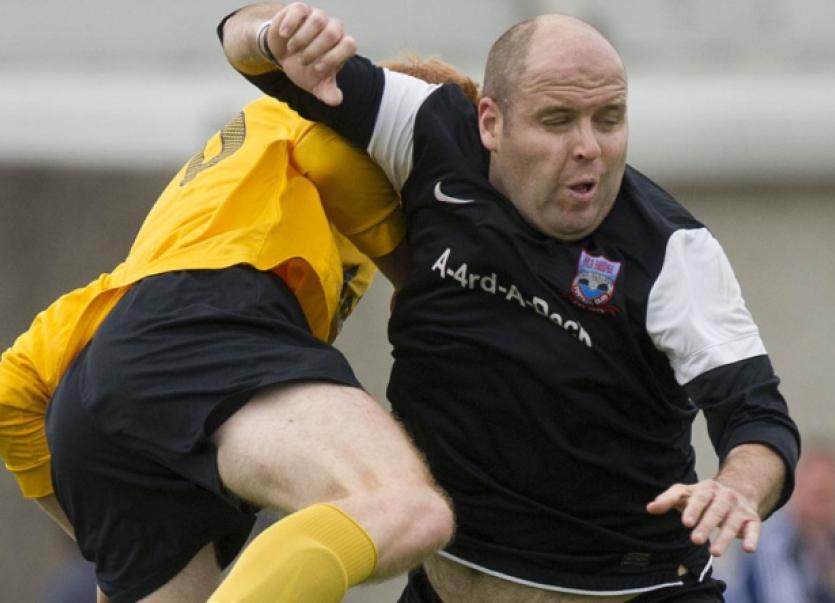 Kilsheelan United got their season off to a winning start with a good win in the First Division Shield over a Wilderness team who will be looking to return to Premier League football this season. And the hosts did it the hard way by coming from two goals down to secure the victory.

It only took the visitors seven minutes to open the scoring when a long throw was flicked forward to Lee Cash, and he coolly rounded the keeper to slot home. The home side were almost back on level terms just three minutes later but were unable to force the ball home after it cannoned back from the post and the Rovers keeper finally clutched it to safety. Kilsheelan were left to rue that chance three minutes before the half hour mark when their defence was all at sea from a quick Wilderness counter attack and they went two goals behind courtesy of an own goal.

This could have seen the home side crumble, but they continued to stick to their game plan, and got a reward seven minutes before the break when an Eddie Doyle shot came back off the crossbar, and Adam Hants was first to react and fire the ball home.

Behind by one at the break, United finally came alive in the second period and two minutes into the half they were level when Doyle again assisted from a corner, this time finding Eddie Sweeney to score. Four minutes later, it was Sweeneyâ€™s turn to provide the chance, and Hants was unlucky not to put his side in front for the first time.

Perhaps the crucial act of the game came right on the hour mark, when Wilderness were reduced to ten men, and there problems were compounded three minutes later when the home side hit the front with a goal from Kevin Gunne. Gunne then provided the final pass for Eddie Doyle to extend the United lead, and the game was finally put to bed in the last moments when Eddie Sweeney fired in the fifth to put his side safely through to the semi-finals of this yearâ€™s Shield.

This was a hugely anticipated derby game to whet the appetites of the football community in Tipperary town and it didnâ€™t disappoint, as the home side just about shaded the proceedings over the ninety minutes in a very entertaining game at the Complex pitch on Sunday afternoon.

It was the visitors if you will that had the first chance when two minutes in Mark Roche almost beat the Saints first choice keeper Aaron Wall, but Wall showed his experience in keeping the strike out. Darren Stokes then had another chance for Town after eighteen minutes which was also saved, and they were left caught in a swift counter attack as Michaelâ€™s raced down the field and scored through Ryan Deere after good work by Davy Butler.

The celebrations were short lived however as three minutes later a long ball over the home defence found Roche and this time he did beat Wall to put his side level.

Again though, a team was shown to be at its most vulnerable after scoring, when minutes later, the Saints re-established their lead and John Bourke fed Ryan Deere to fire home from the edge of the area.

Cathal Ryan did have one more chance to level the game before the break, but he fired into the side netting on the half hour mark.

It was level a minute into the second period though, when Dean Thompson turned the ball into his own net from a corner kick, and both teams were now going all out for a victory.

Saints hit back three minutes later with a Michael Fitzgerald goal, and the clinching effort of the game came six minutes later as Deere completed his hat trick, and giving the green and white side of the town first bragging rights in a saga which should keep local fans interested for the season.

Cahir got off to the perfect start when Pa Fitzgerald found the bottom corner of net from all of thirty after only seven minutes, but that was about the only bright spot on a day when the home side were very much the leaner meaner outfit.

Redmondstown responded well and were level on the half hour when Stephen O Keeffe won the ball and fired the ball to the bottom corner from outside the box. Cahir had to call on their keeper to make two good saves from Brendan Boland before Redmondstown took the lead on the stroke of half time. Kevin Dempsey rose highest at the back post from a corner to head the home side in front at the break.

They then started the second half on the front foot and went three one up on fifty minutes when Kyle Ryan superbly curled the ball in to the top corner from just inside the box. It was four goals to one two minute later through Brendan Boland and it was over as a contest 20 minutes from time when Kyle Ryan tapped in. Redmondstown added the sixth in stoppage time through Ciaran Stapleton to complete a wretched day for the away side, but to also announce Redmondstown as a force to be reckoned with in Division One this season.

Galbally started slow in this game but eventually came away with an all-important win against local rivals St Nicholas to advance to the semi finals of this years First Division Shield. Most of the first half was a dull tense affair with the defences on top, but the deadlock was broken five minutes before half time by Galballyâ€™s man for all seasons Quinn Perry.

They took this lead into the second half and finally added a second on the hour mark when Perry freed Darren Sheedy to fire home. This broke the Saints resolve and the home side made it three five minutes later when Perry got his second, ably assisted this time by Pat Murphy, and a brace of goals both from free kicks by Bernard Oâ€™Brien in a five minute spell made the result a very convincing one for the home side.