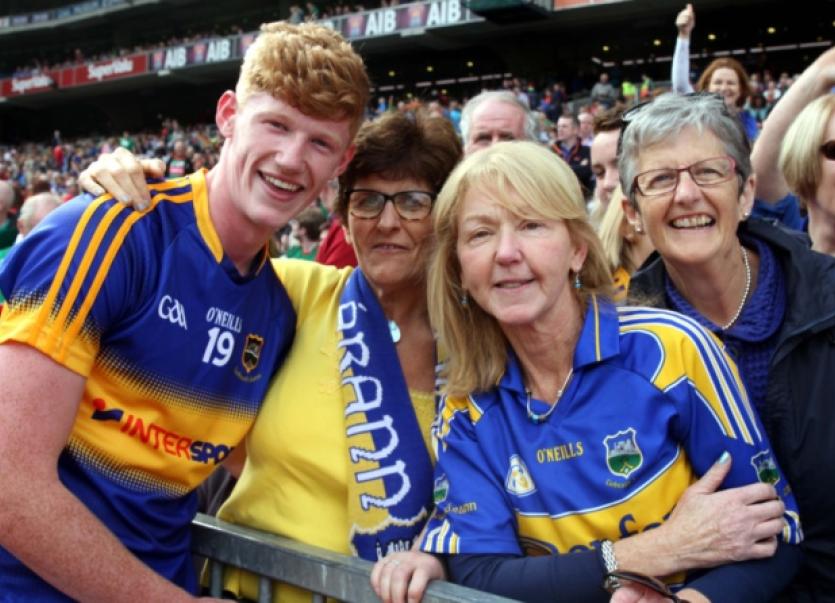 The minor double remains alive after an immense performance by the footballers to set up a re-match with Kerry.

The minor double remains alive after an immense performance by the footballers to set up a re-match with Kerry.

In a year of senior failure thereâ€™s no doubt the minors are riding to the rescue. Whether either delivers the ultimate prize remains to be seen but at least theyâ€™re giving us a presence at both finals raising the countyâ€™s profile in the process.

The footballers have turned around their season quite impressively since the disappointment of the Munster final. Taking the scalps of the Connacht and Leinster champions in succession is quite an achievement and sets them up nicely for that re-match with the reigning champs.

Sundayâ€™s win was achieved the hard road. There were no breaks to soften the journey but instead they needed persistence and resilience to go the distance. They squandered the goal chances that might have made it all much easier and then had to play out the final quarter a man short after Emmett Moloney collected a second yellow.

In the circumstances it took courage and composure to see it out, Stephen Quirkeâ€™s clinching point underlining his value on his long-awaited return â€“ what a pity his punched effort earlier came back off the crossbar instead of trembling the net.

The defence too took huge credit for taming a much-vaunted Kildare attack. Overall they seemed a significantly superior team to Kildare, certainly better than the two-point winning margin would suggest.

Interesting to see Jack Kennedy take the man-of-the-match award after an elegant performance especially in that second half. That match-winning goal by his brother, Colman, in the 2011 final is one that has gone into the folk memory. Isnâ€™t it curious how John Kennedyâ€™s two sons have made such an impact at football instead of hurling? Perhaps itâ€™s a triumph of nurture over nature given their development in a football stronghold like Clonmel. Anyway Jack has to go another step to match the brother.

Qualification for both minor finals sent us all reaching for the records in search of precedents. Cork and Dublin have each done the minor double twice. In Corkâ€™s case it would have been no surprise though perhaps the Dublin doubles raised an eyebrow or two. Letâ€™s not forget that in the minor hurling roll of honour Dublin is ahead of Wexford, Limerick, Offaly, Waterford and Clare. They have four minor wins, their last coming fifty years ago in 1965.

The records show that Tipperary did the minor double once, way back in 1934. Actually itâ€™s an achievement that has a slight blemish because the footballers never played an All Ireland final that year. They beat Mayo in the semi-final and were due to face either Dublin or Tyrone in the decider. According to Canon Fogarty in his history both those teams were â€˜disqualified for illegalitiesâ€™.

It was an era, remember, when championships were often won in the boardroom rather than on the playing pitch. Even Tipperary that year lost an early round of the Munster series to Clare but won it on an objection. A double this year would read a lot cleaner for sure.

Incidentally the minor hurlers in 1934 beat Laois in the final and a quick glance at the two Tipperary panels that year suggests that there were no dual players. This time thereâ€™s an incredible eight players straddling both panels. Itâ€™s a scenario that hopefully wonâ€™t trip us up though there are obvious anxieties around such dual involvement.

Anyway our minor hurlers reach for the first leg of this potential double on Sunday when they tackle Galway at headquarters. It will be our first final meeting with the Tribesmen since the â€™06 success when we stalled the Westerners â€“ and Joe Canning â€“ in their bid for a three-in-a-row. Joey McLoughney captained the side and it was quite an emphatic outcome in the end, 2-18 to 2-7. The following year a Brendan Maher led side completed back-to-back wins.

Our historic record against Galway in the minor championship is quite one-sided: weâ€™ve met twenty-nine times, winning nineteen, losing eight and drawing twice. However, when you narrow the focus to the last ten championship meetings, stretching back to 1991, the picture is quite different. In that period Galway shaded the rivalry, winning five times with Tipperary successful on four occasions and there was just one drawn match in the 1996 final.

You can read the stats another way, which is very telling. In the past twenty five years Galway has won eight All Ireland minor titles whereas Tipperary has managed just four. Their record in recent decades has been hugely impressive and a side which came through a semi-final replay against Kilkenny is going to be confident in this decider where theyâ€™ll have the vocal backing of the Galway crowd.

Tipperaryâ€™s passage to this decider has been low key, which, I suspect, is exactly as manager, Liam Cahill, would want it to be. In a sense they benefitted from the prominence of the senior hurlers who hogged the limelight, grabbing the headlines while the under-eighteens were often just a footnote.

Besides the early-season impression left people underwhelmed. They scraped through rather fortunately against Waterford in the opening round and again failed to set the scene alight against Clare in the semi-final. They were doing just enough to get through and it was similar against Limerick in the Munster decider.

Yet their progress through the series has been steady and consistent. The line-out of the team against Dublin in the semi-final was significantly different from that which began the campaign against Waterford back in April. The changes showed the accumulated knowledge garnered by the management over the series as they learned from each game and re-jigged the side accordingly. I assume theyâ€™re a more accomplished formation now than they were back in the spring.

The return of Stephen Quirke to the footballers last Sunday was surely good news for the hurlers too. His ball winning ability in the opening round against Waterford was impressive and I assume heâ€™ll play a part on Sunday next whether starting or as a replacement.

This is a team which hasnâ€™t won by more than five points in any game but has shown great composure in tight contests. And itâ€™s not just a fifteen-man effort; the impact of replacements has been significant in many games. Against Dublin Ruadhan Mulrooney was hugely impressive when called into action and late in the match it was another substitute, Shane Neville, who closed out the contest with an excellently taken final point.

Itâ€™s difficult to understand the betting odds for this game with Tipperary listed at 1/2 against Galwayâ€™s 2/1. Limerick, for example, lost by three to Tipp in the Munster final and then lost by four to Galway in the quarter-final. That form line, plus Galwayâ€™s benefit of that replay with Kilkenny, would suggest a fifty/fifty contest - at best.

Anyway itâ€™s a big occasion for the team and theyâ€™ll carry all our best wishes in their quest for a twentieth title.

Meanwhile a major casualty of the summerâ€™s senior hurling series has finally walked the plank. Jimmy Barry Murphy took time before eventually stepping down as Cork manager, his term, like that of Eamon Oâ€™Shea, ending in failure to reach the summit.

Heâ€™s a hugely revered character within Cork and greatly admired outside as well. In victory or defeat he has that amiable personality that endears him to hurling folk nationwide. He answered the call in Corkâ€™s hour of need and I suspect heâ€™ll have deep regrets about failing to deliver on his mission. Itâ€™s amazing to think of how tantalisingly close they were in 2013 and how it all came apart at the seams ever since. He wonâ€™t be easily replaced.

On a more positive note for Cork it was interesting to note at the weekend how they carried off a clean sweep of all those underage tournaments. The Tony Forristal and the Tipperary Supportersâ€™ Club U16 competitions were the most prestigious but in all they won seven titles. Is it a straw in the wind suggesting that Cork is on the rebound? There is gathering evidence that at this level they are finally starting to function. Cork schools are competitive once again and their minors this year were very unlucky even without the prodigious talent of Shane Kingston. Watch this space.

Finally weâ€™ll watch the big one on Sunday as interested neutrals. Galway is at a pitch now surely to really have a go at the â€˜Catsâ€™. Theyâ€™ve built momentum since the Leinster final and are in a better place now that at any stage in the recent past. Will it be enough? The bookies say no and I canâ€™t quite convince myself either though Iâ€™m fascinated by the prospects the game holds.

P.S. Seamus Callanan shown red in a Cahill Cup game v Holycross at the weekend where a major melee ensued. Not sure if that means heâ€™s out of the county quarter-finals but obviously weâ€™ll hear more anon.