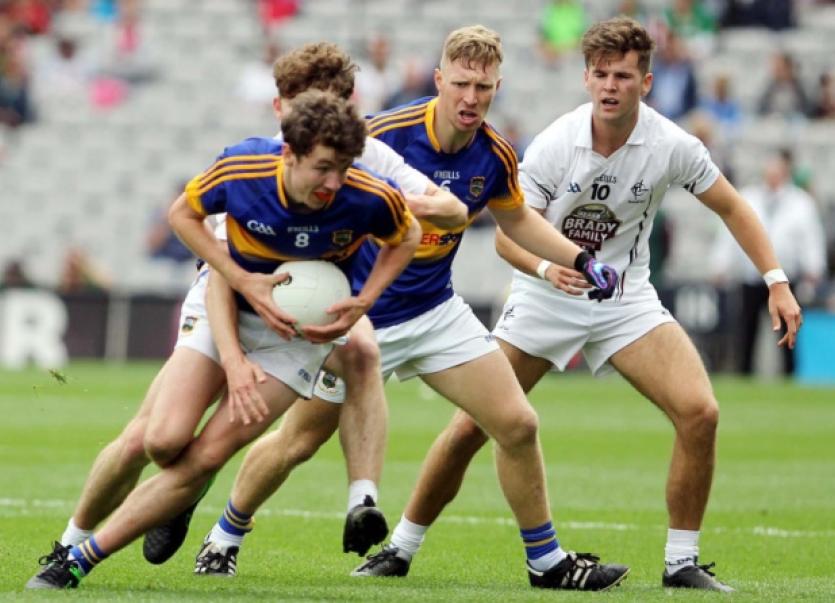 On a wonderful day for Tipperary underage GAA, the minor footballers emulated the hurlers by qualifying for the All Ireland final with a well deserved victory over Kildare.

On a wonderful day for Tipperary underage GAA, the minor footballers emulated the hurlers by qualifying for the All Ireland final with a well deserved victory over Kildare.

Itâ€™s a stunning statement from the county to win through to both national deciders - all the more so as nine players are involved in both panels.

So a number of players who shocked highly rated Kildare on Sunday now turn around and face Galway in the hurling showpiece on Sunday next. And win, lose or draw that game, they then plan to face Kerry in the football final in a repeat of the Munster final.

Itâ€™s a minor feel-good factor that the county hasnâ€™t experienced since 1955 when both sides also qualified for the final - the footballers lost to Dublin with the hurlers beating Kilkenny - and a certain Jimmy Doyle chipping in with 2-8.

Future stars will emerge from this batch of players as well and Commercialsâ€™ Jack Kennedy certainly laid down a marker against Kildare.

Four years after his brother hit the winning goal against Dublin in the All Ireland final, he put in a man of the match performance that the Lily Whitesâ€™ just couldntâ€™ match.

Kennedy shipped a cowardly blow to the face after the final whistle but the Kildare players couldnâ€™t lay a hand on him during the game as he drove at the heart of their defence, and scoring four points along the way, two from play and two from placed balls.

Another huge contribution came from Moyle Roversâ€™ Stephen Quirke who came on as a sub to make his first return to action since an injury kept him sidelined. His physical presence caused major problems in the Kildare defence and he looks certain to play some part in Sundayâ€™s hurling final - he is team captain and manager Liam Cahill will have been delighted to see his performance for the footballers.

Had Tipp not beaten Kildare they would have rued gilt-edged goal chances that were spurned - Aidan Buckleyâ€™s miss in front of an open goal in the 21st minute was the most glaring but at least three other chances were also wasted.

However it said a huge amount for the resolve of the team that they didnâ€™t let it impact on them as they continued to take the game to a Leinster side that had hit big scores in their march to the semi-final but who were confined to three points from play by a miserly Tipp defence.

Tipp led 0-3 to 0-1 after just five minutes with pointed frees from Alan Tynan and Kennedy, and Brendan Martin from play, to a Conor Hartley point for Kildare. But in a game that lacked any real fluidity, they scored only three more up to half time, two from Tynan, one from play, and a great point from play from another dual star Brian McGrath. Ciaran Kelly kept Kildare in touch from frees and the sides went in level at half time, 0-6 each. But converted goal chances could have put Tipp out of sight.

However Tipp dominated the third quarter to set up victory. A great run from Quirke set up Kennedy to restore the lead after three minutes; Kennedy converted a 45 five minutes later after Quirke missed an earlier goal chance; and another super score from Kennedy made it 0-9 to 0-6 - again just minutes after Quirke saw a palmed effort from an Emmett Moloney cross come back off the crossbar.

Despite their lead, a second yellow card for Moloney set off alarm balls with fifteen minutes to play. Down to fourteen players, they saw their lead cut back to one with Kildare points from Ciaran Kelly (free) and Matthew Kelly, but Tipp played clever football to retain possession where they could or else hit it long into Quirke and by-passing Kildareâ€™s extra man.

It worked a treat and a great point from St. Patrickâ€™s man Buckley put them two in front ten minutes from time.

There were still nervy moments as Kildareâ€™s Shea Ryan blasted wide in front of goal that rivalled any of the Tipp misses and a Hartley point brought it back to the minimum again with seven minutes to go.

But Tipp controlled the closing minutes and a superb point from Quirke sealed the deal and signalled great celebrations on a wonderful day for Tipperary.