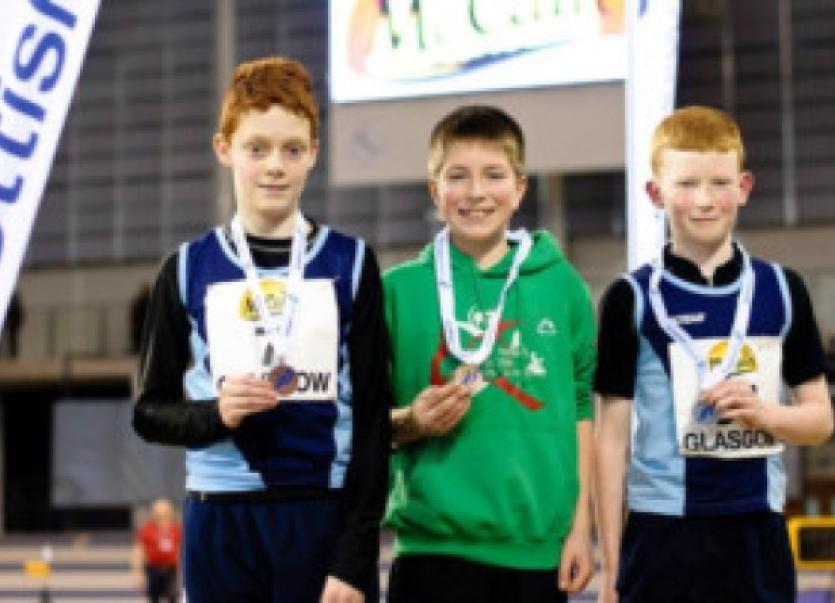 He was one of ten athletes from Carrick-on-Suir AC, who competed in the two day international championship.

Darren won the Triple Jump with a personal best leap of 13.22m. But it wasn’t the only medal he brought home from the competition.

Darren is still under age to compete in the U-18 category again next year.

Two other medal winners were U-14 athletes Martin Kehoe and Jack Pender.

They were 2nd and 3rd respectfully in the High Jump. Both achieved personal best jump clearances of 1.40m.

Leanne Prout and Clodagh Fitzgerald were 4th and 6th in the U-18 60m hurdles final.

Kellyann Doyle was 2nd in the heat of the 400m and Emily Walsh was 8th in the Triple Jump with a jump of 9.26m.

Leanne and Kellyann are still under age to compete in the U-18 category.

Martin Kehoe and Jack Pender were among five Carrick AC U-14 athletes, who competed in the championship.

Aoife Doyle and Jake Vermeer both qualified for the finals of the 60m hurdles where they finished just outside the medals in a very competitive final.

John O’Dwyer qualified for the 800m final by finished 3rd in his first race. He finished 4th in the final with a personal best time of 2.32mins.

Competing at international events is a great experience for Carrick AC athletes and the Club hopes everyone enjoyed the trip.