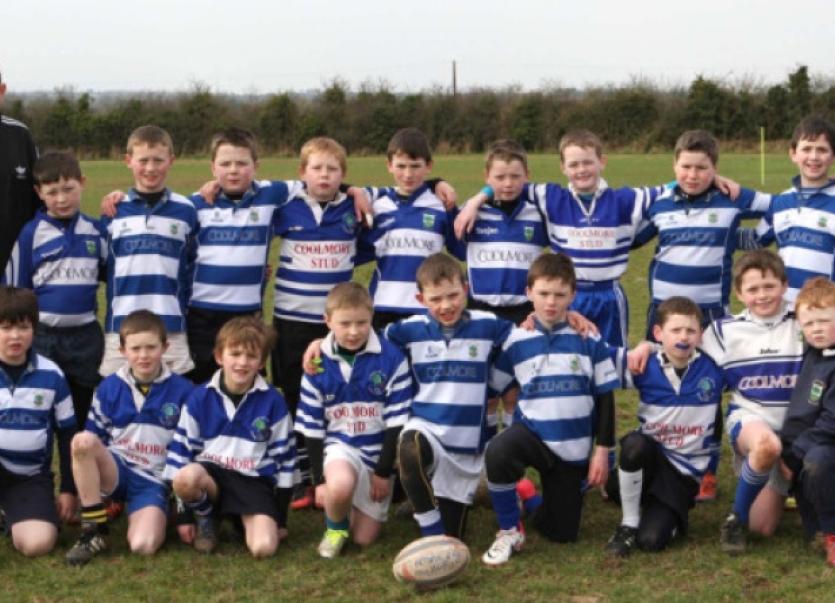 Fethard U8s travelled to Carrick on Sunday and encountered real tough rugby weather. They faced a strong Kilkenny team but Fethard continued to impress with Adam O’Connell getting better with every game and Ana Quigley O’Dwyer great with her tip offs. Mark Neville scored a great try and Michael Blake continues his great tackles and trademark ball picking. Keep up the great work. Training on Friday evenings and mini rugby mums please remember we have a free day next Sunday.

Fethard U9s gave a great performance against Kilkenny and just about edged it at the final whistle. With the mucky underfoot conditions it was decided to call it a day and we didn’t play Carrick. Well done to all who turned up on the day.

U10s played Kilkenny in their first game and gained revenge for their loss earlier on in the season. In their next game Fethard came out on top against a very determined Carrick side and when the final whistle sounded Fethard were only getting into their stride.

With only seven players for kick off, Kilkenny gave us four to let us play their two teams. These four soon showed how to keep the ball moving. The game was slow to start but ended with two good games in tough conditions. Angus McDonald’s hard run yielding a well deserved try. Matt Burke’s great work rate eventually resulted in getting a touch down in the corner. The Kilkenny boys were excellent in their running and passing, a trait we can develop.

U13s played at home to Cashel and achieved a very successful result with three tries from Jack O’Rourke, Darragh Lynch and Patrick Scully. Defending our own line well in the dying minutes they secured the ultimate result with a final score of 15-10. Training as usual Wednesday night.

Fethard U15 Knock-Out League Champions in the Cup

Fethard U15s put in a superb performance in the Cup to defeat a fancied Waterpark side in Fethard on Sunday last. Fethard, playing against the wind in the first half eventually managed to get into the Waterpark 22, where they were awarded a penalty which Gary Kavanagh slotted. Waterpark continued to pile on the pressure and crashed through to score a try. Fethard worked hard to get back up field and when the out-half was tackled late, Fethard were awarded another penalty which Killian O’Dwyer slotted between the posts leaving the score 6-5 to Fethard at half time.

In the second half Fethard were especially effective. A great rolling maul saw Ross McCormack crash over for a try which Gary Kavanagh converted from close to the sideline. This was a fine performance from this young team. Fethard play the winners of Cashel/Nenagh in the semi-final next weekend.

Our U17s played Cashel in the first round of the cup and were 22-0 down at half time but came back brilliantly to within one point of winning the game in an incredible display of determination and skill. The final score was Cashel 29, Fethard 28, what a proud day for these young men.

Fethard U18 Girls have had two matches in the Munster U18’s Competition. We joined forces with Thurles and played home and away fixtures against a Carrick and Clonmel combination team. We saw improvements from our squad of Aobh O’Shea, Hannah Stapleton, Ciara O’Donnell, Amy Tynan, Leah Fox, Aoife Delaney, Karen Hayes, Kora Delaney, Aisling Kelly and Molly O’Dwyer. Our next Munster match is on Saturday, March 23, time and venue to be confirmed. New members are always welcome for girls from 13 years to 18 years. Training Friday evenings from 8pm to 9pm.