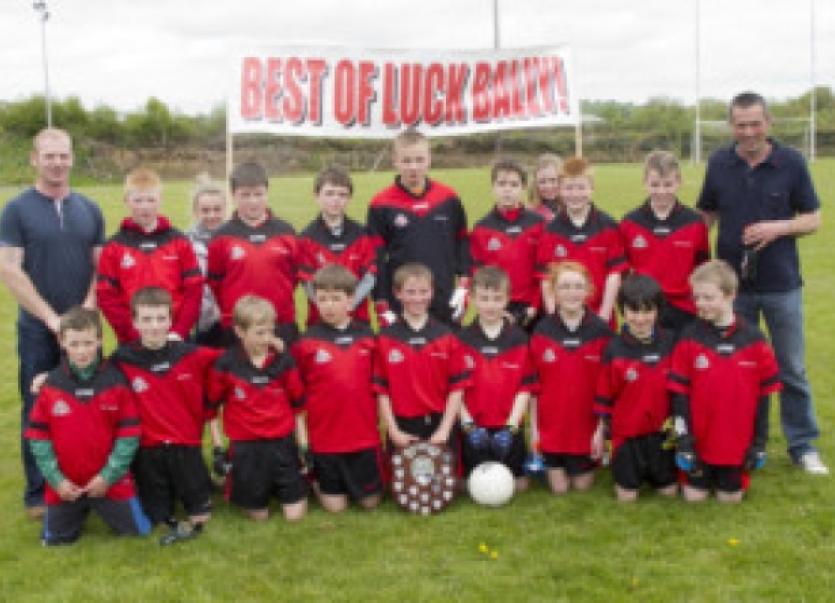 Newcastle staged its first ever south senior football game when neighbours Ardfinnan and Cahir faced each other in the preliminary round of the Clonmel Oil sponsored South Senior football championship.

This game was played in perfect conditions on Newcastle’s excellent pitch but unfortunately the game did not match the setting as a far superior Cahir had little difficulty in disposing of a very poor Ardfinnan challenge.

The winners were in control of this game from the throw –in with Benny Hickey causing the Ardfinnan defence all sorts of problems and Liam Meehan ruling midfield. Before the start of the game a minute’s silence was observed in memory of former Fethard player Joe Kean who passed away during the week.

Hickey opened the scoring with a Cahir free. Peter Hally equalised with a fine point after a storming run through the Cahir defence.

But Cahir replied with 3 Benny Hickey points. Ardfinnan were then given a lifeline when Daniel O’Regan was fouled in the square and Michael O’Sullivan netted the resultant penalty to level matters, Cahir 0-4 , Ardfinnan 1-1.

But Cahir responded with the next 4 points, 2 from Ed Meehan and one each from Liam and Aidan Casey. Billy Hewitt from a free had Ardfinnan’s second point. On 22 minutes Cahir’s Ed Meehan found himself inside the Ardfinnan defence but Ardfinnan keeper Niall Hickey produced a fine save to deny him a goal.

Ardfinnan’s Brian Lonergan reduced the deficit to two but James McGrath quickly replied for Cahir when he intercepted a clearance out of the Ardfinnan defence. Further Cahir points from Liam Casey and a Benny Hickey free left the half-time score Ardfinnan 1-3 Cahir 0-11.

Ardfinnan’s hopes of a second half comeback depended on a good start to the half but it was Cahir who continuedwhere they left off with 4 points without reply from a Hickey free, Padraig Whelan, L Casey and Ed Meehan.

Ardfinnan’s Billy Hewitt replied with a freebut on 10 minutes Ed Meehan again found himself inside the Ardfinnan defence but this time he made no mistake to put Cahir 1-15 to 1-4 ahead and finish the game as a contest.

Ardfinnan continued to battle but were totally dependent on Billy Hewitt for scores but never looked like threatening Cahir’s dominance.

Cahir now go on to face Mullinahone in the South quarter final while for Ardfinnan the last round of the County championship game with Fethard will decide which team contests the relegation playoffs.