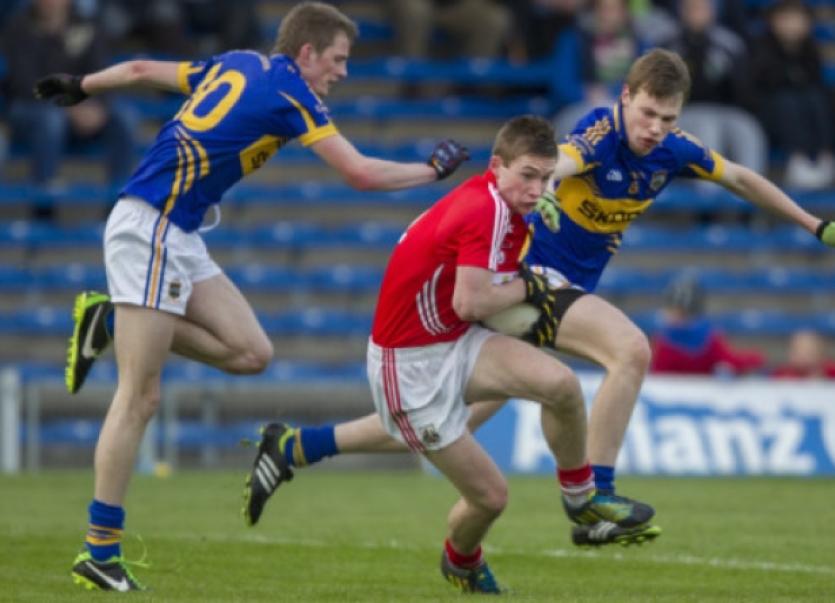 Hotly fancied Cork were put to the sword by holders Tipperary in the Electric Ireland Munster Minor Football Championship semi-final at Semple Stadium last Wednesday in a game that really only came to life in the closing quarter. The victory sets up Tipperary’s bid for a three-in-a-row of titles, with Kerry providing the opposition in the final on July 7.

Following their win over Kerry in the first round much was expected of this Cork side, but against a gritty Tipperary team they came up short and could have no argument about the outcome. Tipp fully deserved their win and had they been more successful in front of goal in the first quarter they could have been out of sight by half-time.

This contest could never be described as a classic. The first half was decidedly poor, and it looked as though wind-aided Tipperary were kicking their chances away as they recorded seven wides in the opening eighteen minutes, and eight for the half.

There was little flow to the game in that period and while Tipperary could take heart from the fact that they were creating scoring opportunities, the chances missed from play and frees left them in a precarious position.

Then, after eleven minutes, the free-taking duties switched to Inane Rovers’ Alan Tynan (there were five wides recorded at that stage), and the improvement was immediate. Tynan went on to shoot four points in the half, three from frees, with Kilsheelan’s Paul Maher notching the other, as Tipperary forged ahead 0-5 to 0-1 by the interval, an inadequate return for their first half supremacy.

Cork’s only point in the half was scored by wingback Sean White in the 7th minute and the dissatisfaction of the team management with the Leesiders performance was reflected in a double substitution at half-time.

Two of the Tipperary points came in the closing minutes of the half, an encouraging finish to what was overall a very disappointing effort, but things improved immensely at the start of the second half as midfielder Liam Casey from Cahir, and Alan Tynan (2) extended the Tipperary advantage to seven points inside five minutes.

A decent lead, certainly, but the inevitable Cork rally came. Full forward and dangerman Michael Cahalane started things moving with a 40th minute point and followed with two more from frees by the end of the third quarter. Now we really had a game.

Tipperary were under intense pressure but in the 49th minute Alan Tynan raised the siege with a point from a free after he himself was fouled. Two minutes later sub Stephen Quirke kicked a great Tipperary point for a six-point lead with nine minutes to go. Tipp seemed to have weathered the storm

but back came Cork again. Sub Aidan Moynihan pointed and Cahalane had a hotly disputed point in the 53rd minute. Cork needed a goal but Tipperary defended in numbers and after team captain Colin O’Riordan of JK Brackens caught a great ball in midfield, he set up Paul Maher for a Tipp point in the 58th minute.

Still it was not over. Moynihan pointed for Cork in the 59th minute and in injury time Jack Bushe cut the lead to a goal. The injury time of over five minutes was agonising, as Cork threw everything into attack. Defender Michael McSweeney hit the post with a goal-bound effort and Tipp scrambled the rebound to safety.

Referee Sean Joy’s final whistle was music to the ears of the Tipp fans in the 1,227 attendance.

While allowing for the finishing shortcomings of the first half, this was a gritty performance by the Tipp boys against a Cork side hotly fancied after beating Kerry in the opening round. Tipp players had to deliver a performance of character and this they did, but there is clearly plenty of room for improvement before the encounter with The Kingdom.

Tipp opted to play wing forward Ciaran Lowry as an extra defender in front of the full back line to counteract the highly rated Cork full forward Michael Cahalane and the move worked to the extent that the Bandon lad got only two poins from play, though he was an obvious threat in the last quarter when the pressure was on.

There were some inspiring displays on the Tipperary side. Captain Colin O’Riordan was a tower of strength at midfield. Outstanding in the first half, he drifted out of the game during the third quarter, but his return to prominence in the closing quarter was crucial when Tipp had their backs to the wall.

Alan Tynan’s accuracy was another key influence. He scored seven points, six from frees, and his taking-over of the free-taking duties was instrumental in getting the team moving after an uninspiring start.

Danny Owens, Willie Connors, Kevin Fahey, the tireless Josh Keane and opportunist Paul Maher were others to make huge contributions while Ciaran Lowry operated very effectively, sweeping in front of the inside backs.

Cork were disappointing. Perhaps the win over Kerry made them overconfident but for 40 minutes they simply did not perform and at the finish could have no complaint about the outcome. Michael Cahalane was the big threat in attack but was well policed throughout. Sub Aidan Moynihan, Sean White and Killian O’Connor were others to figure prominently for them.