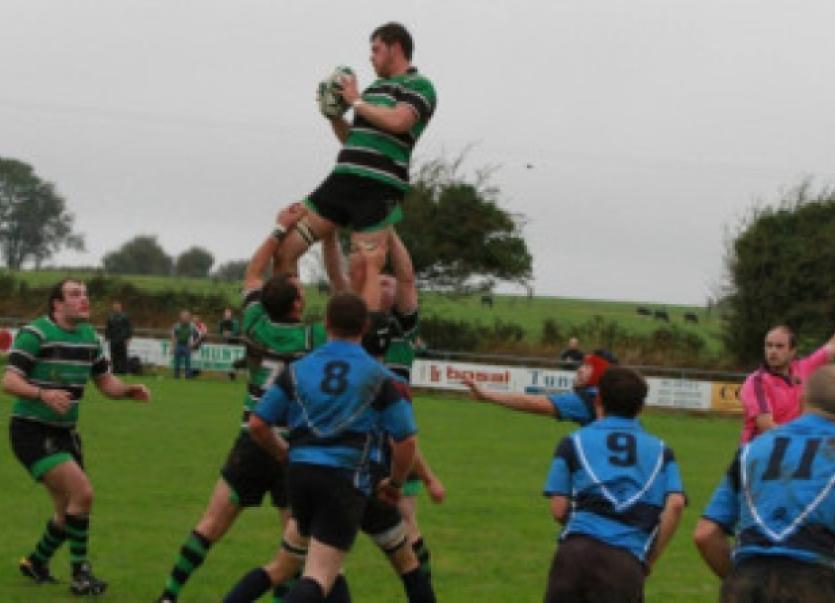 On Sunday last Kilfeacle and District got their league campaign off to the best possible start when they defeated Old Christians by 34-19 in Morrissey Park.

On Sunday last Kilfeacle and District got their league campaign off to the best possible start when they defeated Old Christians by 34-19 in Morrissey Park.

In the 27th minute Kilfeacle’s pack turned over possession and won a penalty. It was a day on which scrum half JJ Cooney had 6 attempts at goal and converted each and every one.

On the half hour mark Cormac O’Donoghue finished a fantastic team effort by scoring under the posts, with JJ Cooney duly converting. No sooner had Kilfeacle managed to gain the upper hand in terms of territory when Old Christians broke down the pitch and duly punished them for by scoring seven points to bring the score to 10 points to 7 in favour of Kilfeacle.

After five minutes of the second half the “Boys in Blue” went over for a try to increase Kilfeacle’s lead to eight points when Diarmuid Carr, playing a captain’s part by leading from the front, touched down after some great work by Diarmuid O’Donnell and Packie Burke. Once again JJ Cooney converted the conversion attempt. The pack were now playing well but not to be outdone the backs started to move the ball well with Packie Burke, Diarmuid Carr, Bernard Callaghan and Pat Ryan showing why they have become regulars on the team.

Another penalty after 12 minutes saw Kilfeacle extend their lead to 20-7. Pat Ryan scored Kilfeacle’s third try, which was converted by JJ Cooney. Old Christians were given a lifeline when in the 24th minute they scored a converted try to reduce the deficit to 13 points.

With just four minutes remaining on the clock and after retaining the ball for numerous phases of play just inside their own half, Kilfeacle looked like they were going nowhere.

Then came Kilfeacle’s best try of the game when Diarmuid O’Donnell decided he would take the ball out of his own half and touch it down over the opposition’s try line much to the dismay, displeasure and pain of the six men that tried to stop him. The conversion kick was JJ Cooney’s sixth and his easiest to convert bringing the score to 34-14.

With just seconds remaining the visitors’ pack started to get the upper hand and when they won a scrum against the head inside the Kilfeacle half they went on the offensive. What followed was their best period of play in the entire game and an excellent team score, which they were unable to convert. In the time remaining Old Christians threw everything at Kilfeacle who to their credit remained steadfast to secure the victory.

Their next game is away to Kanturk in the Munster Junior League Division 1 on this Sunday, October 13 at 2.30pm. They hope that their supporters will turn out in large numbers to cheer them on.

Sunday’s occasion was tinged with sadness as one of Kilfeacle’s best supporters, Patsy Byrne, passed away suddenly last week. The accomplished businessman will be mourned across the horse and greyhound racing worlds after his death, at the age of 64.

Everyone at Morrissey Park took part in one minute’s silence before the game as a mark of respect.

The thoughts and prayers of everyone in the club are with Bridget and the Byrne family at this time. He is survived by his wife Bridget, sons Michael and Sean and daughter Siobhan.