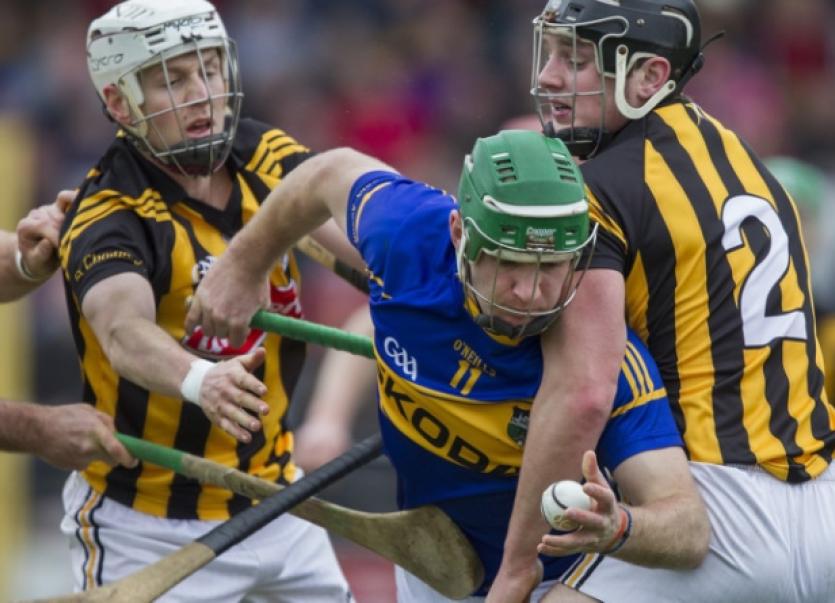 Players were hurling with such abandon and the scores flowing so freely that at times Sunday’s National League game at Nowlan Park resembled the annual post-All-Ireland Final GOAL challenge.

Players were hurling with such abandon and the scores flowing so freely that at times Sunday’s National League game at Nowlan Park resembled the annual post-All-Ireland Final GOAL challenge.

A 16-point turnaround in just over 40 minutes saw Tipperary surrender a 10-point lead as Kilkenny came from behind to claim a famous victory in a remarkable and strange game.

With the roof of the old stand (a victim of Storm Darwin) torn off and a brisk wind blowing down the pitch under a slate grey sky, Nowlan Park bore little resemblance to the venue that basked in a heatwave when these sides last met, in the championship last July.

However the result was the same, as the home team again confirmed their superiority over the visitors with their seventh victory in their eighth meeting since that landmark 2010 All-Ireland Final.

Kilkenny supporters in the attendance of 8,651 were in celebratory mood after their team clambered back from a potential mauling by their age-old rivals to claim victory. It looked initially as if they had been lulled into a false sense of security by their recent dominance of their opponents, not to mention Tipp’s unconvincing defeat of Waterford the previous week.

Tipp flew out of the starting blocks. They were sharp in the tackle, alive and alert all over the pitch and aided by the breeze they let the ball do the work, playing long, raking passes into the forward line where Seamus Callanan, Noel McGrath and Jason Forde found the space to create havoc.

One passage of play in particular summed up that first half. After goalie Darren Gleeson had made a smart save from Jonjo Farrell the ball was tranferred to the other end within seconds and Kieran Bergin supplied the pass for Seamus Callanan to score his first goal and his team’s third (3-3 to 0-3), after Noel McGrath and Jason Forde had already found the net.

With Padraic Maher, Michael Cahill, Cathal Barrett, James Woodlock and captain Brendan Maher all playing starring roles Tipp were well on top and Callanan scored their fourth goal when he shot through David Herity. When Michael Cahill scored his second point from distance Tipp were 10 clear (4-9 to 1-8) after a half an hour. However a second Kilkenny goal, from Henry Shefflin, after Colin Fennelly had scored their first, showed they weren’t about to crumble.

For all their efforts Tipp’s half time lead of 4-9 to 2-9 was by no means unassailable, especially in such an open contest and with the wind to favour Kilkenny on the turnover.

And there’s no team to chase a game like Kilkenny, as they outscored Tipp by 3-11 to 1-5 in that second period. Points from Walter Walsh and Colin Fennelly got them motoring and when the irrepressible Fennelly raced clear to score his second goal it was game on.

Crucially Paddy Murphy, Noel McGrath, James Woodlock and Seamus Callanan all had wides within 10 minutes of the re-start, with Callanan also driving a 65 into David Herity’s grasp, when points would have steadied the ship. Callanan provided some relief with a 49th minute goal but it was only temporary. Fennelly cracked home a beauty of a goal when he collected Shane McGrath’s kicked clearance and Henry Shefflin’s free in the 59th minute gave Kilkenny the lead for the first time since the second minute.

Seamus Callanan struck the equaliser from a ‘65 but the tide had firmly turned in Kilkenny’s favour, with sub Richie Hogan really growing into the game. Seamus Callanan came close to grabbing a sixth goal for his team after his free had restored parity with 5 minutes remaining.

But when Mark Kelly scored Kilkenny’s fourth goal to send them 3 points clear with as many minutes remaining there was only going to be one outcome.