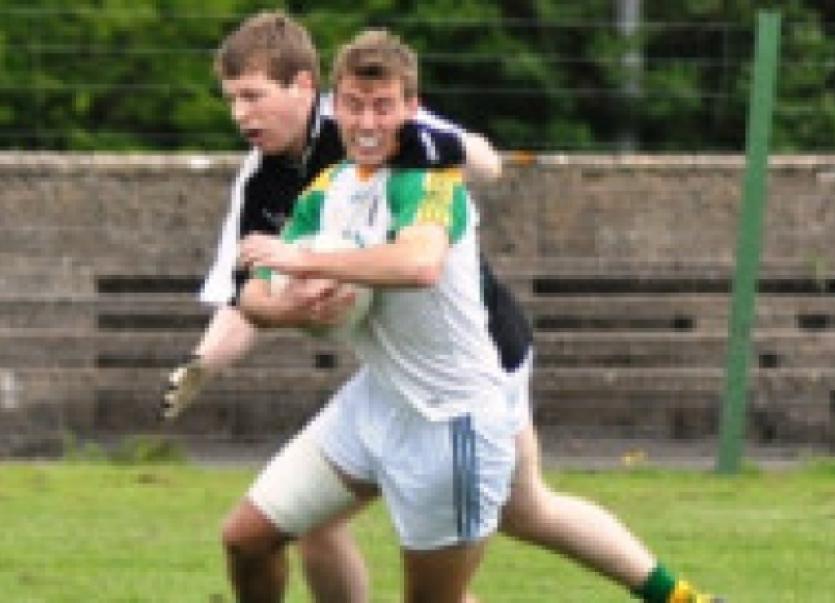 Clonmel Commercials defeated a gallant Aherlow Gaels on Saturday last to be crowned county u-21 ‘A’ football champions for the eighth time.

Clonmel Commercials defeated a gallant Aherlow Gaels on Saturday last to be crowned county u-21 ‘A’ football champions for the eighth time.

At Leahy Park, Cashel, the star-studded hot favourites eventually enforced their  superiority over the Aherlow and Lattin/Cullen combination. However, the West Tipperary champions won many friends, especially with their brave first half performance after which they only trailed by 1-5 t0 1-4.

Seeking their first title at this grade since 2010, Commercials with an abundance of county stars at senior, under 21 and minor level were expected to prevail without too many problems. But right from the start it was the underdogs who dictated the play and centre-forward Mark Russell was the dominant force in the early stages. Russell kicked two fine points inside the opening seven minutes and was involved in a neat passing movement with Anthony Leahy in the 11th minute which ended with Leahy shooting low past Jake McDonald. The Gaels were as surprised as anyone to see themselves 1-2 to 0-0 ahead.

Somewhat shaken, the Clonmel response was instant. Jason Lonergan gained possession around midfield and with one of his trademark spinning runs drew in enough defenders to create space for county senior Ian Fahey to blast home a goal.

Man of the match Padraic Looram was making a serious impression with his energy and workload around the middle of the field and together with county senior Michael Quinlivan they steadied the ship. Last year’s county minor Looram added two fine points for Commercials the second of which in the 28th minute levelled matters for the first time at 1-4 apiece.

Liam Murchan was then on the end of a move involving Quinlivan and Ian Fahey to put Commercials into an interval lead with a well-taken point.

An early second half free by Thomas Frewen levelled matters but from there to the finish the class and experience of Charlie McGeever’s side rose to the top.

The introduction of  Colman Kennedy in the 35th minute was a telling move. Immediately his impact was noticeable and his pivotal role in the forward line began creating openings against an already overworked and tiring Aherlow Gaels rearguard.

The game was effectively put to bed halfway through the second half when Liam Murchan, set up by a superb pass from Eoin Fitzgerald, scored Commercials third goal.

And with his last piece of action in the game Murchan again rattled the net in the 47th minute when finishing off a fine movement started by Richie Gunne, carried through by Padraig White and rounded off the himself.

During all this onslaught the West champions bravely kept working away though with little reward to indicate the great effort being made. Thomas Frewen who would be their only scorer in the second half, kicked a fine left footed point in the 50th minute.

But the respite for Aherlow Gaels was brief. Richie Gunne who began the previous move for the fourth goal, finished the fifth one himself. The defender soloed through the ever-tiring backline to shoot a scorcher to the net.

The formbook always suggested the South champions would prevail and full marks to them, they did. After a slow start they stepped up to the mark and won comfortably. Even without first-team certainties Seamus Kennedy and Liam Ryan they had too much in reserve for the opposition. Looram, Quinlivan, Ian Fahey, Lonergan and Colman Kennedy were the main men, but the likes of Robbie Lyons, StephenKelly, Eoin Fitzgerald, Padraig White and Liam Murchan all played their part on the day and throughout the campaign.

For the gallant boys from Aherlow and Lattin/Cullen the likes of the excellent Sean Cunningham, John Moloney, Thomas O’Donoghue, captain Ed O’Meara, Anthony Leahy, Shane Ryan, Sean Kiely and Mark Russell, particularly in the first half, left nothing on the field of play.