Three sent off as Tipp suffer second half meltdown 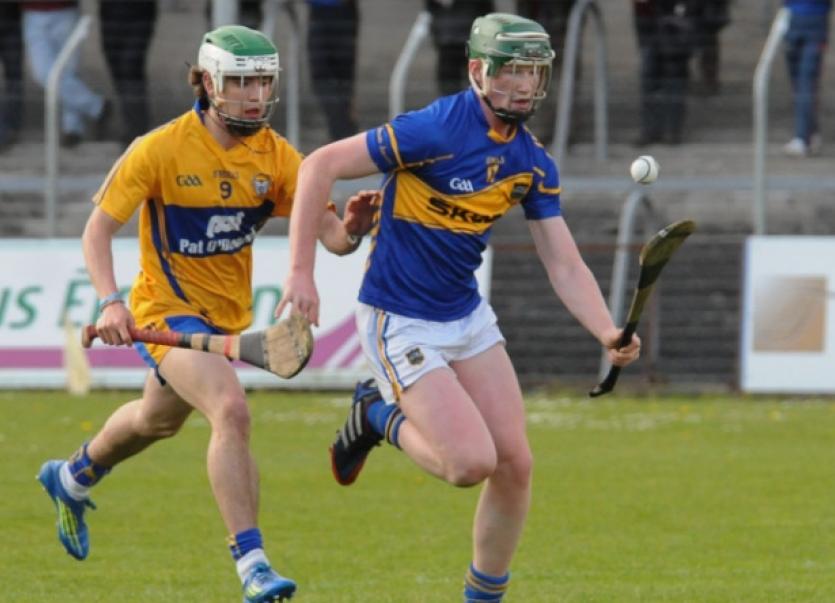 A second defeat in three weeks for Tipperary’s minor hurlers saw their participation in the 2014 championship finished before the month of May had even started.

A second defeat in three weeks for Tipperary’s minor hurlers saw their participation in the 2014 championship finished before the month of May had even started.

And as disappointing as such an early exit is, it will be the manner of the defeat at Cusack Park, Ennis, on Wednesday evening last, that will linger long after the result is forgotten.

The main talking point post-match wasn’t the hurling as it should be, but rather the very rare dismissal of three Tipperary players in a game.

The first of these occurred just before the interval when Tommy Nolan received a straight red for making contact with Clare’s Jason Loughnane as the keeper made his way out to clear the ball. It was somewhat harsh in the circumstances as initially the referee hadn’t blown. Indeed from the goalkeeper’s clearance Tipperary were to gain possession and Alan Tynan sent a long range point over. It seemed somewhat of a delayed response to the partisan crowd’s reaction and the keeper going down which prompted the referee to consult his umpires. The dismissal of the Drom and Inch player was to have a huge bearing on the game as Tipp, who led 0-10 to 0-9 at the break, went in to meltdown after the interval.

However, Tipperary could have absolutely no complaints with the second half dismissals of a further two players.

In the 50th minute Kildangan’s Willie Connors was red carded for a pull across Ian Galvin as the Clare forward bore down on goal.

Three minutes later Tipp substitute Chris McCullagh was dismissed. In his seven minutes on the field the Moycarkey/Borris player was booked, and separately a minute later, given a straight red.

By the time the full-time whistle was blown and the shambles that pertained at that stage, it was easy to forget that the first half had been a good evenly contested game.

Tipp with a slight breeze behind them had the better of the opening quarter and led 0-7 to 0-3 after 14 minutes. Darragh Peters was excellent leading the Tipp defence while centre-forward Stephen Quirke hit three superb points, two from long range and another on the fly when soloing through the heart of the Clare defence. Alan Tynan was also showing well and contributed five points including three frees in the opening half.

Ominously the home side came more in to the game in the second quarter and had parity restored by the 26th minute. Aaron Shanagher at full-forward was proving to be a rewarding targetman and by the end of the game had 1-13 clocked up, including 10 frees, many of which he earned himself.

Tipp had points either side of the interval, from Alan Tynan and Andrew Coffey to go two up. However, Coffey’s point just 20 seconds of the resumption would be one of just two scores for Tipp in the second period - they wouldn’t raise a flag again for all of 27 minutes.

And in that near half-hour Clare took complete control. A reshuffled Tipp team were no match for the hosts and as the game went on it descended in to an uncomfortable-to-watch meltdown. Tipp lost their shape, lost their discipline, lost two more players to red cards and ultimately lost the match, comprehensively.

Clare, driven on by fine performances from the likes David Fitzgerald, Michael O’Malley Paraic McNamara and Michael O’Shea overran the Tipp defence who were to concede 15 frees over the hour.

It was 0-18 to 0-11 with 10 minutes remaining when the bottom completely fell out of the barrel for Tipperary.

Clare corner forward Ian Galvin was ‘taken out’ while heading for goal resulting in Willie Connors’ dismissal. From the resultant penalty Shanagher billowed the net. Two minutes later Tipp were reduced to 12-men when Chris McCullagh received his marching orders.

After that it resembled a one-sided training session with Clare adding on easy points from play via Brian Guilfoyle, Colin Corbett and substitute Stephen Conway.

Besides the three red cards, four Tipperary players were also booked. The ill-discipline of Liam Cahill’s side had cost them dearly in every way, in terms of manpower and also on the scoreboard. It was a very harsh lesson for such a young side.

Not too much positivity can be taken from such a short-lived campaign but for Tipp there were excellent displays from Darragh Peters, Alan Tynan and Stephen Quirke. An overworked full back line of Conor Ryan, Jack Skehan and Paul Maher also tried hard, while Bill O’Connell never stopped trying in midfield.