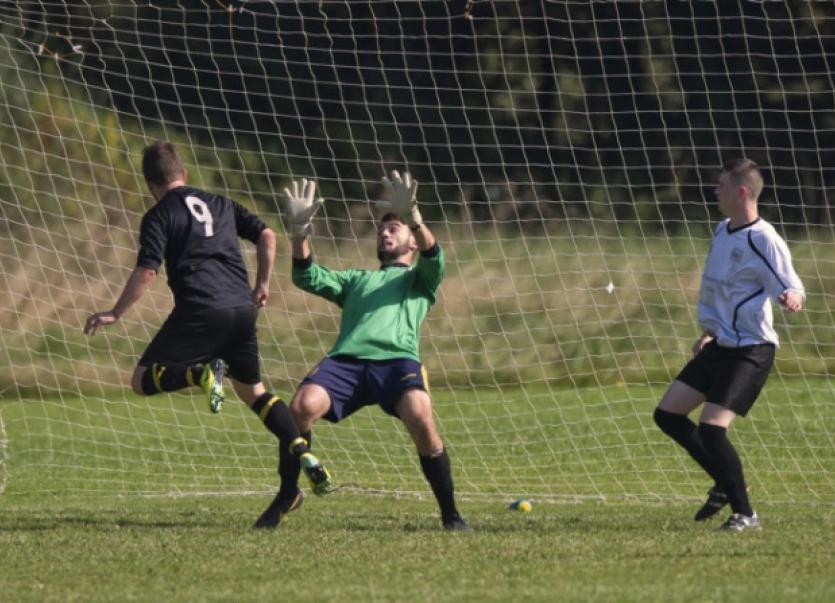 It was an interesting Premier League weekend with a significant win for St. Michael’s over Clonmel Town and Celtic defeating Wilderness Rovers in a Clonmel derby.

It was an interesting Premier League weekend with a significant win for St. Michael’s over Clonmel Town and Celtic defeating Wilderness Rovers in a Clonmel derby.

Peake Villa gained a valuable three points away to a Cashel Townteam struggling to get points on the board this season, in a game that was played in brilliant sunshine before a large crowd of supporters from both teams.

The opening exchanges were very even, but the game sparked into life in the thirteenth minute with a brilliant chip by Owen O’Dwyer to open the scoring for the visitors. After that, both teams settled down into a game where despite a lot of good build up play, very few clear chances were created, as midfielders held sway.

This continued right through the second half, and in the final minutes Cashel began to desperately push forward to try to salvage something from the game. Unfortunately they were caught in a classic counter attack by the Thurles side, who broke away with a long clearance from their own area, and saw Dale Loughnane slip between defenders and the keeper to slot home and make all three points safe.

In the big game of the weekend St Michael’s continued their good form with their fifth win on the trot in these games, and put themselves into a good position to retain the Premier League that they won at the end of last season.

The home side were in control from the start, and took the lead after only four minutes, when Russell Quirke delivered a pin point corner onto the head of Mark Mc Grath, who duly powered his header home. They nearly gave this advantage away a minute later however, when indecision in the defence almost allowed Dwayne Burns to sneak in, but his chipped cleared the bar.

Five minutes later, Burns got on the end of a quickly taken throw in, to run through on goal, but again he shot over wildly. As often happens with these sides though, Michael’s punished their guests for not taking their chances, and doubled the lead just after the 20th minute. Thomas Fahey was the instigator of a lightening counter attack, and he found Jimmy Carr who left the Clonmel defence for dead before crossing for McGrath at the far post to score his second and put his team two up.

This put the Saints in complete control, and they were unlucky not to add to the lead with chances falling to Chalkie Walsh and David Slattery going unconverted before the break.

Comfortable with the lead, the home side slowed down the pace of the game in the second period and made it difficult for their visitors to fashion any real chances to get a foothold back in the game. And the next real chance fell to St. Michael’s when they were awarded a penalty just after the hour mark, but Brian Buckley didn’t even make the keeper work, as he blazed his shot high over the crossbar.

The visitors did try to spice up their attacking play by bringing on some fresh legs, but even then, they never really got a chance to make things hard for a Michael’s team that has had the voodoo sign over them in recent years, and the home side took all three points in the end very comfortably.

This was a highly anticipated derby game with Rovers returning to the Premier League this season, and was witnessed by a large and vocal crowd who weren’t disappointed by a game played at a breakneck speed throughout.

After a flurry of opening chances for both sides, it was Celtic who opened the scoring after eighteen minutes, when a mix up in the home team’s defence allowed David Joyce to tap in unopposed.

The home side weren’t deterred by this though, and within ten minutes were back on terms as Ger Kennedy beat three Celtic defenders before executing a delicate chip over the keeper and into an open goal. They weren’t only displaying heroics up front though, as Rovers had to call on Philly Doherty in the goal to keep them level a few minutes before half time, as he pulled off a magnificent save from a free kick by Johnny Cagney.

The second half was played just as the first with tackles flying in, and total commitment from both sides, but as the game went on, the heat of the day began to get to the players legs, and mistakes started to creep into the game. This culminated just after the hour mark, when Seanie O’Hara was deemed to have been fouled in the area, and Celtic’s Johnny Cagney fired home in what ended up being the decisive goal of the day.

Wilderness’ plight wasn’t helped five minutes after the goal, by going down to ten men when a player was shown a second yellow card and was sent to the line. After this, Celtic dictated the play and ran down the clock to collect a hard won and valuable three points.

Even at this stage of the Premier League, every point is seen as a critical one, and no more so than in this game between two teams who will want to secure their Premier League status as soon as possible.

In a tight first half Glengoole were slightly the stronger and in the 40th minute were awarded a free kick which was not cleared and resulted in them going ahead with a goal from Andy Hanly, and left them in front at the break. Glengoole continued to press in the second half, and were awarded a penalty in the 65th minute, which was dispatched to the net by Andy Hanly.

The visitor’s task got even harder when they were reduced to ten men after a player saw the line as a result of a second yellow card. But they didn’t give in, and were handed a lifeline with a penalty with ten minutes left to play, and James Buckley did the honours to reduce the definit.

Borris did not give up and were awarded a penalty in the 80th minute which was slot home by James Buckley to reduce the deficit to one goal. With five minutes to go however Borris lost another player to a second yellow card and this helped Glengoole to score their last goal in the final minute when Stephen Holohan.