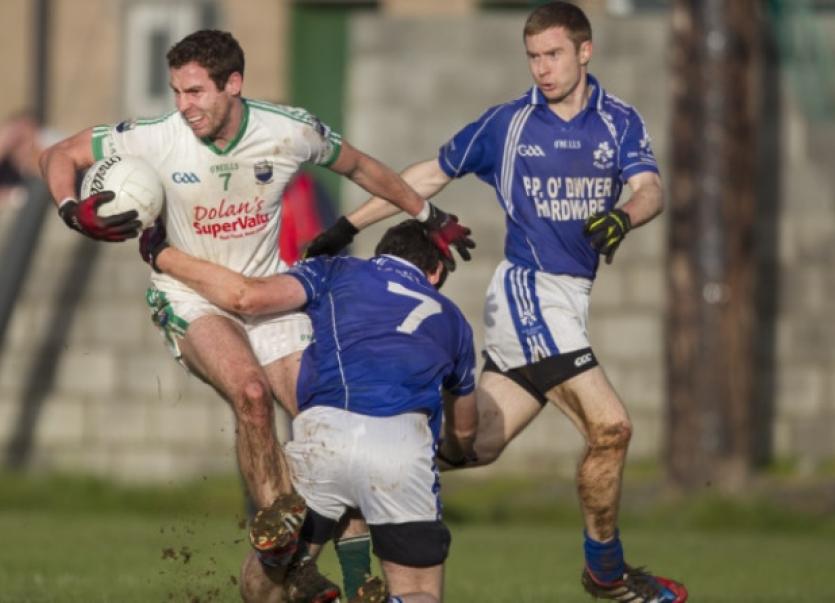 Their timing was perfect.

Their timing was perfect.

Aherlow Gaels had been on the ropes for much of Sunday’s County Senior Football Championship quarter-final in Ardfinnan but they took the lead for the first time when it really mattered.

Just two minutes of extra time remained when they grabbed the crucial score. Mark O’Brien and Thomas Hanley provided the assists for Seamus Grogan to force a shot over the line for the game’s only goal, despite a despairing lunge by Moyle Rovers’ David Mulcahy to keep his effort out.

A goal was always going to have a huge bearing on the outcome and, coming so late in the day, so it proved. Aherlow had been a point in arrears but now they were two ahead, with time running out. Rovers still had time to retrieve the situation but despite a late point from Liam Boland’s free Aherlow weren’t to be denied.

The win was a reward for Aherlow’s persistence and determination. They played catch-up for most of the game but their battling qualities shone constantly, none more so than in the second half of normal time. A point from Liam Boland gave Rovers a 0-7 to 0-4 lead 13 minutes into the second half, the biggest distance that separated the teams over 80 minutes, but they failed to score in the remaining 17 minutes of normal time.

Instead it was Aherlow who seized the initiative to force extra time. A point from their talisman Barry Grogan edged them closer and two points in the last four minutes, the first from Seamus Grogan and the second from Barry Grogan’s free two minutes from the end, left it all square at 0-7 each.

Rovers regained their composure in the first period of extra time, with Stephen Quirke’s free and Jack Lonergan from play giving them a two-point advantage. However a cleverly-worked 45 from Barry Grogan saw International Rules player Ciaran McDonald reduce the deficit to the minimum (0-9 to 0-8) at half time in extra time.

The decibel level in the relatively small attendance rose when Barry Grogan’s point three minutes into the second half of extra time meant that the scores were level for the fourth and final time. Ross Mulcahy’s point four minutes from the finish looked to have given the Powerstown/Lisronagh team the edge. But as they discovered all afternoon, Rovers just couldn’t shake off this gutsy Aherlow outfit and Seamus Grogan’s goal proved decisive.

Seamus Grogan’s late intervention capped a fine personal performance in the second half especially, His brother Barry shouldered the responsibility for keeping them in the game when they were under pressure, as Rovers set the tempo, and he was the orchestrator of most of the West team’s attacks, as well as their top scorer. Thomas Hanley picked off a couple of important points and Cathal Dillon was another of their leading lights.

Full back John Hennessy had a stormer until injury forced him to retire near the end of normal time while Laurence Coskeran and Ciaran McDonald also did well in defence.

Moyle Rovers will have plenty of regrets. They were never led until a couple of minutes from the end and their workrate couldn’t be questioned but their inability to build a substantial lead when they were on top (they were ahead by a goal twice in the second half) cost them dearly. Their cause was hampered by 14 wides, 5 more than their opponents.

Nevertheless they have a young team that holds the promise of better days ahead. Jack Lonergan, Stephen Quirke, Dominic Walsh and Liam Boland were the pick of the attack. Luke Boland and the experienced Peter Acheson provided plenty of inspiration around the middle of the field. Until that late lapse the defence was watertight with David Conway, Tadhg Fitzgerald and Darragh Dwyer the standout performers.

Conditions were ideal, November bidding farewell with a beautifully calm and sunlit afternoon. The teams were evenly matched in the opening quarter with Rovers’ Liam Boland and Jack Lonergan and Aherlow’s Thomas Hanley and Barry Grogan (from a free) exchanging scores. Rovers took the lead with a free converted by goalkeeper Ciaran Kenrick and Stephen Quirke’s point from play before Barry Grogan reduced the gap to a point. However Rovers were the better team at that stage and they confirmed their superiority with one of the best moves of the match for a score that gave them a 0-5 to 0-3 interval lead - Peter Acheson, Stephen Quirke and Luke Boland were all involved before Jack Lonergan supplied the finish.

Defences were on top in the early phase of the second half. A Luke Boland point put Rovers a goal clear and following points from Aherlow’s Thomas Hanley and Rovers’ Liam Boland they still held that advantage entering the last quarter. But any notion that Aherlow might fold were dispelled in a tense final quarter and a dramtic period of extra time.