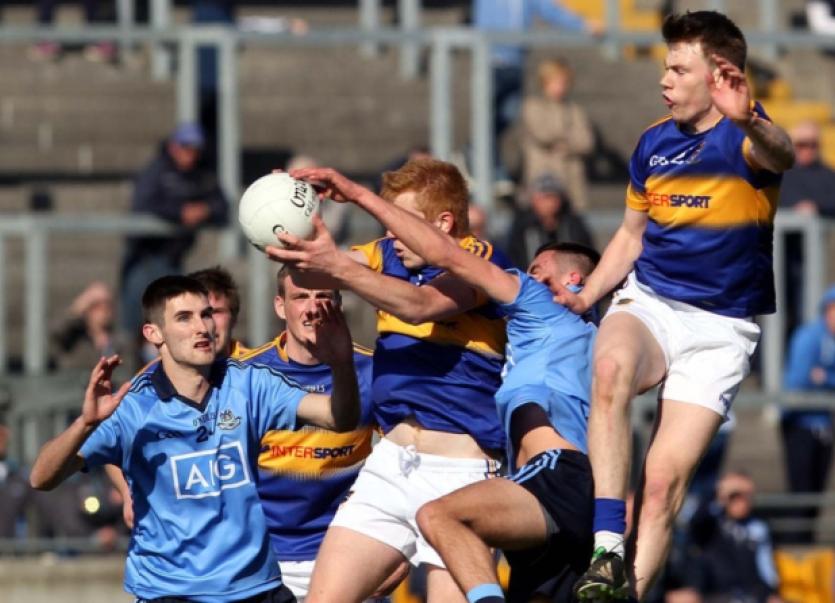 Tipperary under 21 football manager Tommy Toomey was quick to deflect the success on Saturday last against Dublin back to others.

Tipperary under 21 football manager Tommy Toomey was quick to deflect the success on Saturday last against Dublin back to others.

The Arravale Rovers man was generous in not alone crediting the victory to his players and management team but also to the County Board for its investment in football and to the often overlooked work done by volunteers at grassroots level throughout the county.

Speaking after the game Tommy firstly praised the tremendous character of his young charges for another outstanding performance, especially when coming from five points down early in the second half.

“They showed great character today. Cork hit us hard in the Munster final with two sucker punch goals, one before half-time another just after half-time but again today the lads never panicked, they keep going, playing the same type of game, move the ball, get on the end of it, get the scores and the ball flew over the bar and we got some great scores today.

“They are an honest bunch and they give everything. They will never be found wanting win or lose. And it’s not all about winning. We have lost an awful lot and we’ve won a few things. But now we are in an All-Ireland final and we’ll take that and we’ll go on now for two weeks training and work together again like we have and enjoy it.”

Put to him that his side are improving with each outing as the challenges get more difficult, Tommy said:

“You are looking at the boys there today before the game (for the minute’s silence to Des Billings) and you could see three or four Tipperary players gathered in the middle of the field with their colleagues from universities. You could see the Tipperary players are with the big colleges in the country now, Steven O’Brien with DCU (he won a Sigerson Cup medal this year) and Colin O’Riordan and the boys with UCD with All-Irelands (O’Riordan was on the UCD Freshers winning team this year). Like that wouldn’t have happened seven, eight, nine years ago. These boys have their own profiles now and Tipperary football teams are very very strong because of these groups. Again I have to give credit to the special encouragement to the underage structures in Tipperary who have brought these players on. If they weren’t put in place we wouldn’t be here today. And that’s what it is all about down at the grassroots where the hard work has to be done with young players and Tipperary did that and invested and I give great credit to the County Board for doing that,” he added.

On the expectations of the players prior to the Dublin game?, Tommy replied.

“What you have to do in all circumstances when you are looking at a team and I do the video analysis as well as managing the team and Peter Creedon and the boys make a huge input - the senior management team are with this team - and we have a lot of very good people. The big thing for us in all games is to make the opposition beatable. To put it in the minds of our players that these boys are human, they make mistakes, they leave in goals, they leave in points, they give you chances. And that was our main thing this week. Dublin will give us chances and you know Dublin fought the fight but I thought there was only going to be one winner today because I knew the attitude of the players. That’s basically what it came down to, real attitude. And I am not demeaning Dublin or anything in the way they went about their game it’s just that we had it today and maybe next week it will be a different result but today we had it.”

And looking ahead to contesting an All-Ireland final.

Asked if having beaten Cork and Dublin now some people will no longer be looking at Tipp as such outsiders for the final and how will that perpective affect his team.

“Having beaten Dublin there will be a lot of talk and a lot of stuff like that but the lads are well able to take that in to account. They are all experienced footballers and experienced people. We know after today there will be a lot of hype and stuff but we will have to deal with that. The next game will be the next game and we will go at that then,” concluded the Tipp manager at the end of an historic day of football.