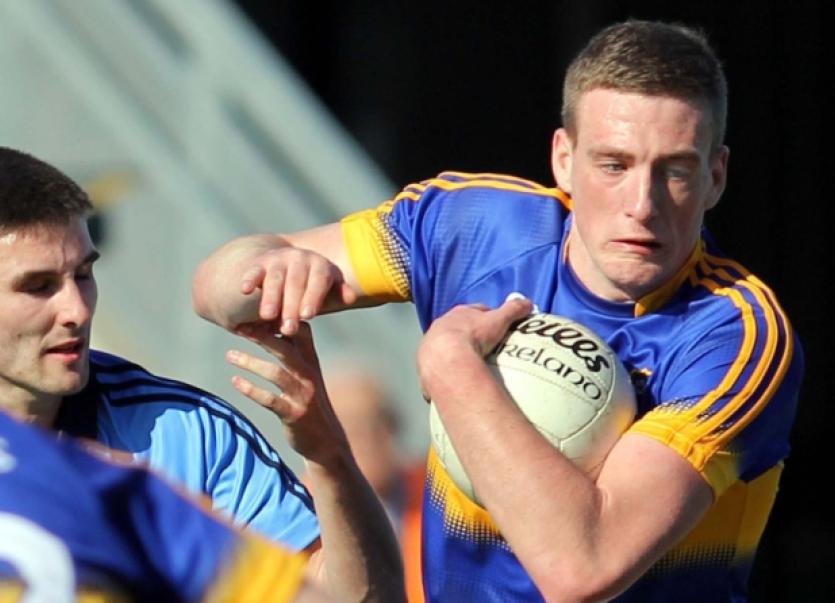 Historic, magnificent, superb, glorious. It seems whatever adjective you use to describe Tipperary footballers’ latest performance is inadequate.

Historic, magnificent, superb, glorious. It seems whatever adjective you use to describe Tipperary footballers’ latest performance is inadequate.

At O’Connor Park, Tullamore, on Saturday last, the under 21’s display against Dublin in the All-Ireland semi-final was all of those and more. Fittingly at the end of an awe-inspiring hour they created history by becoming the first-ever Tipperary side to earn a place in an All-Ireland decider at this grade.

As they were nine days earlier against Munster champions Cork, once more Tipp were ranked as outsiders by “those in the know” when facing the reigning All-Ireland champions Dublin. Once again Tommy Toomey’s side were to tear up the formbook and produce another spectacular display to shock the Gaelic football world.

And with each passing game the ‘crossbar’ is being raised in terms of the magnitude of the challenge to be faced and each time Tipperary are responding magnificently. A laborious opening day Munster semi-final win over Clare was followed by a vastly improved showing to capture the provincial crown against Cork at Semple Stadium. Against an even stiffer opposition on Saturday last, Tipp went up another notch in every line of the field to dethrone All-Ireland champions Dublin. Now just one hour’s football stands in the way of Tipperary and a first-ever Clarke Cup.  Tyrone will provide the opposition on 2nd May. Let there be no doubt, as good as Tipp have been to date, another outstanding performance will be needed on Saturday week if further history is to be made. But that’s all for another day.

On Saturday last Dublin, with the aid of a strong breeze, opened the scoring inside a minute with a point from Cormac McHugh but early indications were that Tipp weren’t overawed by the occasion. A couple of early chances went abegging with some wasteful efforts into the arms of the Dublin keeper but eventually Tipp got off the mark in the 13th minute with a point from Colin O’Riordan when coming in from the corner. It would be Tipp’s only point from play against the wind.

Dublin through McHugh and Colm Basquel went 0-3 to 0-1 ahead but over the course of the first half they would kick seven wasteful wides.

Tipp were doing magnificently around the middle of the park with O’Riordan and man of the match Steven O’Brien in particular majestic in his fielding. Tipp reduced the lead to a point with a Kevin O’Halloran free on 20 minutes which came from a pull-back on Ross Mulcahy. This indiscretion might have merited a black card on another day.

The Dubs put on a spurt in the 10 minutes before the break with four points to Tipp’s one. Scores from Cormac Costello (free), Shane Carthy and two from McHugh including a free were answered by a Josh Keane free. The concession of those four points would have been a concern to Tipp and while the half-time lead of 0-7 to 0-3 was a lot in a low-scoring game, Tipp would have the wind in their sails on the resumption.

Inside two minutes Dublin went five points ahead with midfielder Carthy’s second point of the game. His workrate around the middle was immense over the hour against O’Riordan and O’Brien.

Tipp needed to get going soon and they did. Two points inside half a minute followed. Firstly a free won by Ian Fahey was converted by Keane and from the kick-out Ian Fahey fed Paul Maher whose pass to O’Riordan was converted.

Dublin’s first score in 11 minutes came with a point from Costello but the pendulum was swinging Tipp’s way. A brilliant point from all of 45 metres from Jason Lonergan half-way through the second period was inspirational in a tight game. Soon afterwards O’Halloran put O’Brien through but Dublin corner-back Martin Cahalin, sensing the imminent danger, took the big Ballina man out for a black card. Tipp’s Kevin O’Halloran pointed the free to bring Tipp level for the first time with 12 minutes to play.

O’Halloran, who was having a quieter game than the heroics of his Munster final debut, put Tipp ahead for the first time with a superb 40 metre free and another point from the Portoe man a minute later after a pass from Lonergan put Tipp two up with 10 minutes remaining.

Tipp were unlucky not to wrap up the game just then when a long range free fell short and Ian Fahey’s quick reaction was matched by the keeper to save a certain goal.

Just when it seemed Tipp were on the verge of history, two quick frees converted by Costello restored parity at 0-11 each with two minutes to play.

And Tipp must have felt they had it won a minute from time when a sweet crossfield pass from Bill Maher found Ross Mulcahy 30 metres out and under pressure the Moyle Rovers half-back split the posts. But Dublin wouldn’t let go of the cup easily. With time gone over the 60 minutes  David Campbell seemed a super sub with a great leveller when powerfully going through the middle. Extra-time beckoned, almost.

Ian Fahey won a free on the 45 and O’Riordan’s quick thinking and accurate pass put O’Brien through for the lead point. Kevin O’Halloran hammered the final nail in the Metropolitans’ coffin with a well-struck free from 45  metres in the 62nd minute.

All Tipp players were heroes on a heroic day. Evan Comerford’s kick-out were pin-point accurate while the full-back line, particularly a brilliant Kevin Fahey gave the highly-rated Dubs little space all day. Bill Maher at half-back and the midfielders O’Riordan and O’Brien were majestic. In the forwards Ian Fahey and Josh Keane did trojan work all day, but all six had their moments.