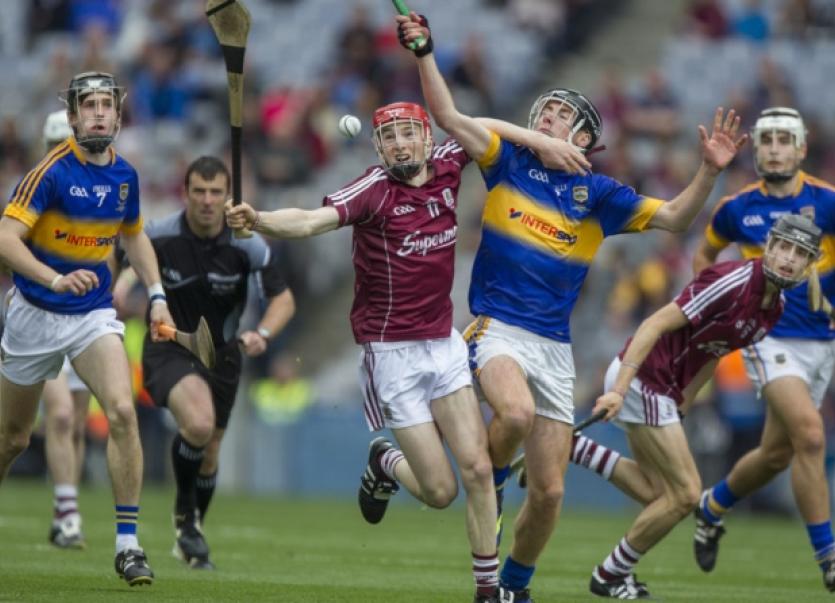 In truth it was a deeply depressing day. Kilkenny’s ongoing stranglehold on the top prize leaves everyone else choking, Galway the latest to feel the suffocation. And our minors, who might have brought some light relief, were undone by Galway’s second-half goal-burst.

A bit like Galway in the senior game our minors were in a strong position at half time. We’d spilled one goal and had seen their goalie, Gilligan, deny us on a few occasions but still went in level in a game that looked like going to the proverbial ‘wire’.

Unfortunately it all fell away badly in the second half. We tried to man-mark their sweeper which left us exposed at the back and they quickly found the channels through our defence for those match-winning goals. Maybe keeping in tighter for longer might have been a wiser option but that’s with the twenty-twenty vision of hindsight.

In truth Galway looked a cut above Tipperary. They were slicker and snappier in their touch. We looked more laboured, our movement and decision-making slower. And then of course goals are usually game-changers. Once they sliced through for those majors and with the roars of the Galway crowd in their ears there was no way back for Tipperary.

Usually the bookies have their odds smack on the money but in this case I couldn’t understand the betting market. How Tipperary could be such roaring favourites against a Galway side that took out Kilkenny in a replayed semi-final is puzzling. All season we had modest expectations for this team and perhaps that impression was ultimately the more accurate one.

Credit though to team and management for making a brave stab at the year and taking us to the final hurdle. Liam Cahill’s (inset) comments about the role of past players and the need for enhanced investment in underage structures shouldn’t be ignored either.

And the debate about the two codes must - finally – be faced up to. Having an overlap of eight players between the two panels is simply unworkable. We still live the myth that you can successfully marry the two and what I find disturbing is the unwillingness to even face the debate.

A few years ago Willie Maher, our last All Ireland winning manager, highlighted the dual code problem. For his troubles he was then overlooked for the U21 job. The County Board doesn’t want people to rock the boat, instead they prefer to tip-toe around the issue, in the process serving nobody.

This year football was unhelpful to our U21 hurling prospects and hurling damaged our senior football prospects. That’s the issue: dual code serves nobody. Charlie McGeever now has his full panel back for two weeks to prepare for the minor final against Kerry but these lads haven’t been able to give their undivided attention to either code. By contrast Jack O’Connor has been able to plot and plan unhindered with a full complement all summer.

And yet the vibe you get is ‘don’t mention the war’. Brendan Cummins stated in his internet column at the weekend that ‘in a few years the dual question will raise its head’ but ‘it’s a debate for a later time’. Talk about sidestepping the issue and avoiding having to contribute something of substance!

The time has never been more appropriate to shine a spotlight on this issue. Our brave minors have done us a great service in that regard. But will the Board grasp the nettle? On past experience I won’t be holding my breath and, regrettably, people like B. Cummins are doing nothing to change the mindset.

No such dual-code issues exist in Kilkenny where their dedication to the ‘caman’ is absolute. I assume I have no KK readers so I should be reasonably safe in stating that I found Sunday’s victory the most depressing of the lot. By any law of logic or succession they shouldn’t have been winning this. They were in transition, for God’s sake, having lost a host of legendary players, the type it takes years to replace. Then one of their two top cats, Richie Hogan, had a gammy thigh and had to be replaced. They had to be ripe for the taking.

I was thinking of John McIntyre and his claim after Kilkenny’s semi-final win over Waterford that it was irrelevant who won the other semi, the ‘cats’ would cream either of them. He was right, of course, though we’ll never know how Tipp would have fared on Sunday.

What we do now know is that Galway were dismal because just like the Leinster final they bottled it when the fat was in the fire in the second half. Once again Joe Canning went AWOL when his county needed him most.

As for the referee he certainly made a few bad calls against Galway in that second period but his worst call of the day was not to dismiss Johnny Coen in the first half. In any field game, rugby, soccer or Gaelic, that was a stone-wall red card. In two games now reckless tackles by Galway escaped the deserved sanction which is why I’m out of sympathy with their cribs about the referee.

So if Kilkenny in transition can churn out yet another All Ireland what hope is there for the future? Watching the after-match formalities there was something almost joyless about the way Kilkenny went through the motions. Under Cody they’ve found a formula and just keep rolling out the titles with no one able to decode the secret. I already fear for 2016.

Anyway, maybe our local championship will provide some distraction as the preliminary quarter-finals take centre stage this coming weekend. It’s certainly an action-packed programme with twelve of the remaining fourteen teams vying for quarter-final slots. Clonoulty and Drom/Inch watch on from the sidelines after getting byes.

I suppose the big issue in Tipperary’s championship is whether anybody can stop Sarsfields from adding another crown to their growing collection. At this stage they’re listed as 11/10 favourites with Drom/Inch closest on odds of 10/3. It’s a substantial gap but reflects the recent history between the teams.

By contrast you can get odds of 25/1 on Mullinahone who face Sarsfields on Sunday evening at Cashel. The South runners-up took a thumping from Loughmore in last year’s county semi-final and they’ll feel unlucky to draw Sars’ is this preliminary quarter-final. Bringing Sarsfields out of the Stadium will be a help to the South side, though it’s difficult to see an upset here.

Probably the most generous odds on a team for the county title is the 9/1 being offered on Nenagh Eire Og. Remember they lost a quarter-final to Sarsfields last year by a single point at the end of extra time. They’re regular title contenders but so often fall short on crucial days, which probably influences the odds. Still 9/1 is mighty generous for a team that should advance to the quarter-finals at the weekend when they play Roscrea.

On Sunday afternoon the Ragg will host a double bill of games. South champions, Killenaule, open the programme against Portroe and should be able to progress to the quarter-finals, though in past years they’ve disappointed outside the division.

The second game at the Ragg sees West champs, Eire Og, take on Lorrha. The Westerners prevailed earlier in the year when the sides met in their county group so they’ll be fancied to do a repeat. Yet the Annacarty form hasn’t been eye-catching recently, despite completing a three-in-a-row in the West, so don’t rule out an upset here.

The remaining pair of games takes place in Toomevara where Kilruane face Brackens and Kildangan have Upperchurch to contend with. Perhaps a North double will be the outcome here.

Finally the All Ireland U21 decider comes to Thurles on Saturday evening where Tipperary will ruefully mull over the ‘what ifs’. Limerick are strong favourites to prevail over the three-time Leinster champions and should succeed which would further add to our sense of one that got away.