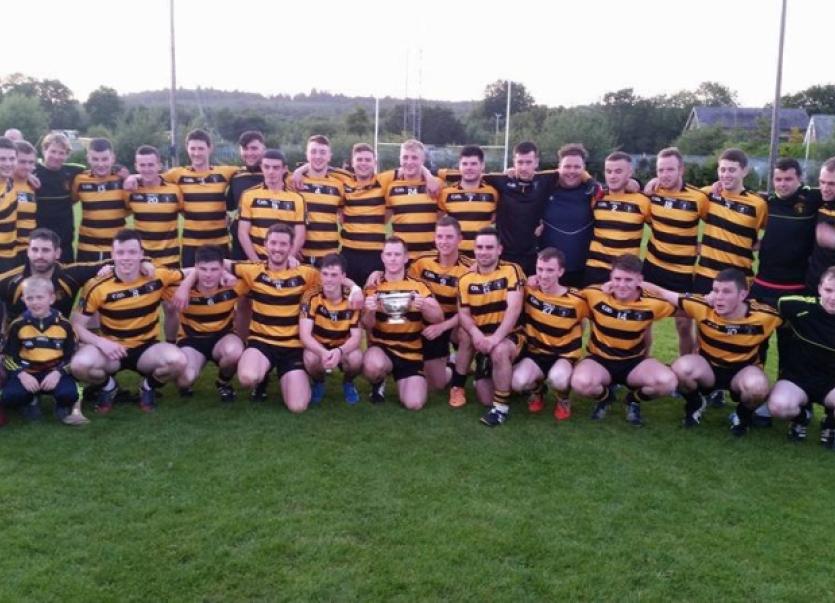 Arravale Rovers are Rea Clarke Hennessy West Senior Football champions for the third time in five seasons after defeating Eire Og Annacarty Donohill 0-12 to 0-9 in the final on Saturday last in Dundrum. The game was played in ideal conditions on a bright sunny evening.

Arravale Rovers are Rea Clarke Hennessy West Senior Football champions for the third time in five seasons after defeating Eire Og Annacarty Donohill 0-12 to 0-9 in the final on Saturday last in Dundrum. The game was played in ideal conditions on a bright sunny evening.

Bryan Lowry opened the scoring after two minutes with a well taken score. In fact Arravale Rovers could have been further ahead as they kicked two wides either side of the point.

Eire Og gradually settled into the game and a Damien O’Brien free after five minutes saw them draw level. Three minutes later Paul Downey pointed to see Eire Og lead for the first time in the game, that score coming from their full back line who dispossessed the Arravale forward and worked the ball up the field to point at the other end. Eire Og were creating chances but their shooting and decision making was letting them down, hitting three wides in a six minute spell.

Donagh Leahy at half back continued to run at the Eire Og defence and was rewarded when he pointed and levelled the game for the second time. Scores were hard come by with both sides contesting and fighting for every ball and forcing each other into errors.

On the quarter hour mark Donagh Leahy added his second and Arravale’s third which was quickly followed by a point from James Hogan as Arravale now opened up a two point lead.

Eire Og were dealt a blow ten minutes before the interval when corner back Jeremy Furlong went off through injury. He was replaced by Diarmuid Ryan. Brian Fox and Conor O’Brien led from the back as Eire Og seemed to find an extra gear as the half wound down with points from Darragh Money (45), Tom Fox (play) and Damien O’Brien (free) to go into the lead. James Hogan would add his first of four frees in the game just before half time to see the sides all square for a third time.

Eire Og started the second half as they finished the first in attacking mode but again they failed to add the finishing touch as the wide count mounted. The half got its first score six minutes in when Brian Fox pointed to see Eire Og back in the lead but it was short lived and almost immediately from the resulting kick out Arravale substitute Paddy Dalton tied up the game for a fourth time. Bryan Lowry immediately followed with a point as Arravale were now the ones creating the chances. Ten minutes into the half James Hogan added his third point of the game and a second from a free when he doubled Arravale’s lead. Paidi O’Dwyer immediately pointed at the other end to reduce the deficit to the minimum again.

Both sides were coming deep and then attacking on the break trying to create chances making scores hard to come by. Tommy Lowry pointed on the quarter hour mark after he won a breaking ball from a throw in to again put two points between the sides. Donagh Leahy who continued to run at Eire Og saw his shot come back off the crossbar but Conor McManus reacted quickly to point. Eire Og continued to get into good positions but again failed to make to them count. The winning of this game for Arravale probably came in the 25th and 26th minutes of the game when James Hogan hit two crucial frees to finally put daylight between the sides for the first time in the game.

Darragh Mooney responded with another point from a free to reduce the deficit to three points with a minute and half of normal time remaining. Eire Og continued to attack and tried to work a goal to level up the game but Arravale Rovers packed the defence to crowd out the Eire Og attack. The final whistle went to rapturous cheers from the Arravale supporters and players winning on a score-line of 0-12 to 0-9.