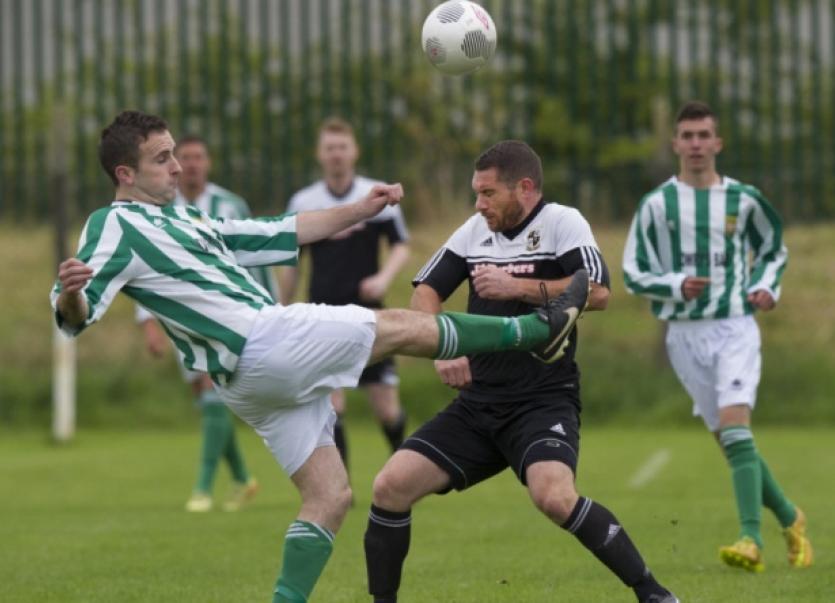 Cashel Town, St. Michael’s and Clonmel Town all recorded wins on Sunday last in the Premier League to keep their 100% records intact .

Cashel Town, St. Michael’s and Clonmel Town all recorded wins on Sunday last in the Premier League to keep their 100% records intact .

Cashel Town continued their good start to the season with another win over a young Two Mile Borris team who were still stinging from a very heavy defeat in the first round of games last weekend.

The visitors have high hopes this season, and were fast out of the blocks for the second week in a row, carving out a number of half chances, before William Fitzelle final opened the scoring after a quarter of an hour with a beautifully taken free kick.

The home side were in no mood to roll over for a second week in a row however, and within five minutes were back level when Jamie Maher beat the Cashel rearguard and fire a levelling score.

The game really opened up after this, and both sides had opportunities to go in front. Ten minutes before the break, it was the visitors who finally converted with a goal from one of their younger players as Elliot Thompson put them back in front, a lead they took to the break.

The second half continued in much the same fashion as the first, with both sides coming close, before Town assured themselves of all three points twenty minutes from the end, after last week’s hat trick hero Ger Browne continued his fine run of form with another well taken goal to keep Cashel at the summit of the league for another week.

The Thurles side were looking for a good reaction to the heavy defeat they suffered away to Cashel last weekend, and got it here when they inflicted a second defeat in a row on Premier newcomers Bansha Celtic.

It wasn’t plain sailing though and like last week, Celtic started very well, creating plenty of chances before forcing the Villa defence into a mistake and seeing them turn the ball into their own net to give Bansha a one goal advantage at half time.

The second half was a different matter though, as Villa showed why they have been a Premier League mainstay for many years by taking complete control of the game. Their pressure paid off ten minutes into the second period when they equalised through a strike by Jody Mahoney.

The winner was hard coming though, and they had to wait until the seventieth minute when Mickey Wade finally scored to give his side the points.

Saints were always a stride ahead in this game and eventually wore down the dogged resistance of a gallant Old Bridge team, who’ve now acquitted themselves well in both games since their return to the Premier League, without picking up any vital points.

The visitors took control early on, and had a number of chances to take the lead through Mark Hoban, Colin Bargary and David Slattery, but none were converted.

They finally broke the deadlock in the twenty fourth minute when Padraig Fogarty got on the end of a John O’Brien cross to head home. It took until five minutes before the break before the home side had their first clear sight on goal when a ball fell kindly for Barry Kiely and he forced Aaron Wall to save at full stretch in the Michael’s goal.

The second half followed much the same pattern as the first with the home side frustrating the Saints attack and keeping the game to a single goal until the 69th minute of the game when Richie Ryan shot low into the goal to double his side’s lead.

Four minutes later Jimmy Carr made it three as the superior fitness of the visitors began to show and nine minutes from time, the game was put to bed completely when Fogarty and Slattery combined to score a fourth goal for Saints.

A fifth followed five minutes from time when Carr was taken down in the area and Slattery scored his second, but straight from the kick off the home side managed to evade the Saints defence and score a consolation goal through Eoin Leahy.

Glengoole opened their Premier League season by welcoming Clonmel Town and the game was a pretty close affair with both teams creating a number of chances early on.

The home side took the lead in the 32ndminute when Thomas Kerwick held possession under pressure and laid it back to Daniel Rafter who scored low to the keepers right from 25yards out.

Just before half time however Town were on level terms when Tony Scully weaved through the Glengoole defence and scored from the edge of the box.

The second half was more of the same and the visitors finally took the leadin the 56th minute when Aidan Mc Grath scored from inside the box and this was enough to give Town all three points.