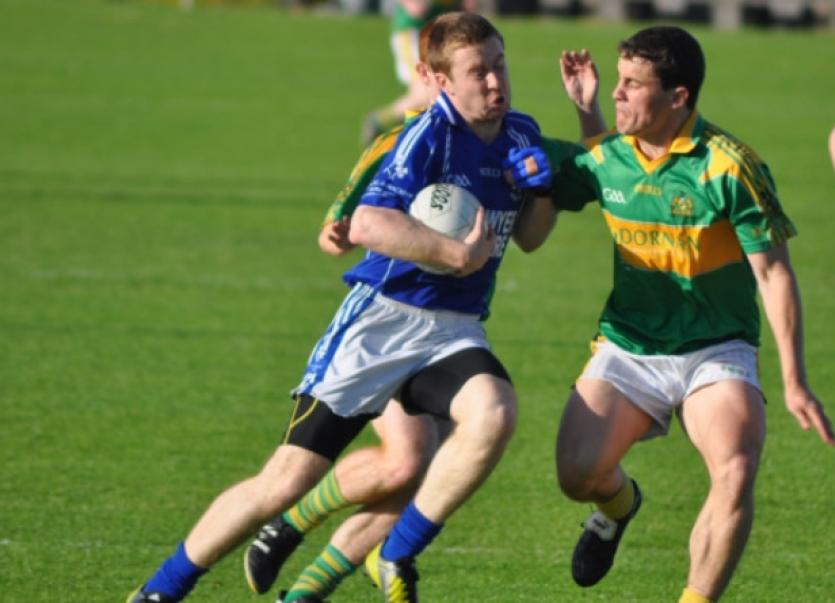 A strong finish by Eire Og  Annacarty earned them a win over champions Clonmel Commercials in New Inn on Wednesday night last.

A strong finish by Eire Og  Annacarty earned them a win over champions Clonmel Commercials in New Inn on Wednesday night last.

It was a welcome victory for the West Tipp side but it seemed very unlikely ten minutes from time when Commercials were three points to the good and in control. However a late Eire Og rally saw them score 1-4 to 0-1 in the closing minutes to keep their options alive regarding progress in the county championship. For Commercials it was their first competitive  defeat in their quest to retain the O’Dwyer Cup.

The Clonmel side had the better of the first half but still somehow went in trailing at the break. Eire Og opened the scoring inside 40 seconds through Conor O’Brien but found themselves trailing 0-4 to 0-1 after 23 minutes. Commercials scores coming from two frees (Ian Barnes and Alan Lonergan), a fisted effort from Alan Lonergan and a good point from corner-forward Ian Fahey.

In the minutes leading up to half-time Brian Fox tagged on a good point from play for Eire Og following a good passing movement. Right on the stroke of half-time the same player soloed through the centre and somehow managed to get the ball over the line. It wasn’t the prettiest goal ever scored but its importance was significant. The county league champions from 2012 were as surprised as anyone to be going in at the break leading by a point.

The second half was a far better spectacle than the opening period with the intensity rising as the game progressed. Aldo Matassa and Richie Ryan exchanged excellent points before Commercials took control with five of the next six points. Ian Fahey and Alan Lonergan (2) popped over three frees with two fine points from play coming from Niall Kelly and Luke Moore. Annacarty’s only response in this period was a point from man of the match, Brian Fox.

Damian O’Brien started the Eire Og revival with a pointed free before Conor O’Brien inspired his colleagues with a determined run through the middle and laying off for Richie Ryan to convert.

There was no way back from this late setback for Commercials. Alan Lonergan did add a late free to narrow the deficit to two, but that man again, Brian Fox, concluded the scoring with another point to seal victory.

The final action of the evening was of an unsavoury nature in the middle of the field, a melee which thankfully ended quickly. The referee brandished a couple of yellow cards and Aldo Matassa who had already been booked was dismissed.

On a perfect night for football and a meeting between county champions and county league champions, the game promised more than it delivered. But two teams, short many in personnel for a myriad of reasons including injury, work commitments and emigration, served up a competitive second half. They could very well lock horns again later in the year as the championship develops.

For the winners Brian Fox stood out above all others but there were also very good performances from Conor O’Brien, Ronan O’Brien, Kev Fox, Richie Ryan, Damien O’Brien and a roaming and high-fielding Darragh Mooney.

Commercials who were very depleted with the likes of Michael Quinlivan, Jason Lonergan, Shane Power in the States and Johnny Harney and Richie Carroll injured, were honest in everything they did.

Seamus Kennedy was their best performer in the first half while Aldo Matassa and Kevin Harney were more prominent in the second half. Others to stand out were Fergal Condon, Danny Madigan, Luke Moore, Ian Fahey and Niall Kelly.