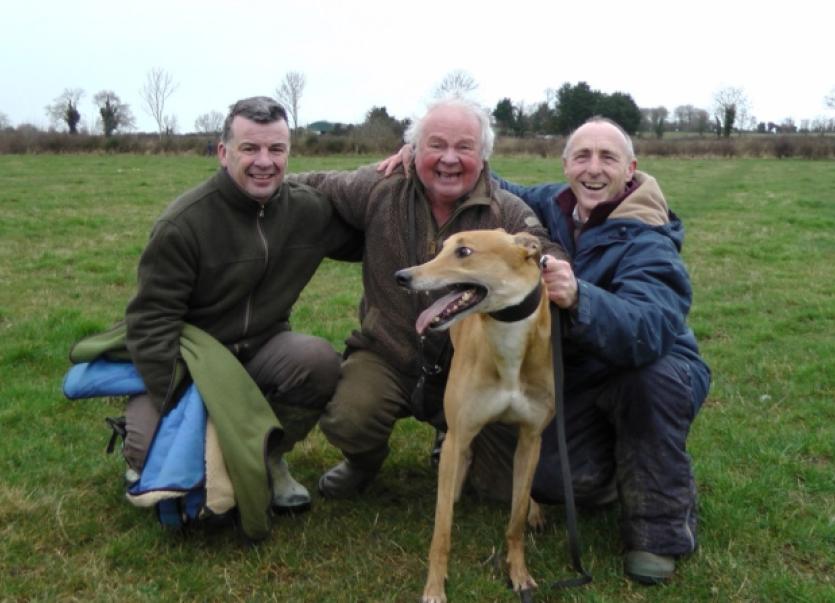 Once the curtain raiser for the National Coursing Meeting, this popular event now has a niche of its own, one week before the action gets underway at Powerstown Park.

With a winner’s prize of €2,000 it is no surprise that there is a quality entry, including a number of pups that came very close to qualifying for the Derby or Oaks.

The draw has made it very difficult to select a winner with the 4th buckle (Blueview Arnie v Arise Sir Mark) and the final first round course (Isle Of Dreams v Rachmaninov) certain to see early exits for two fancied runners.

First into action will be last Sunday night’s sprint winner at Clonmel track, Marshals Ted, and he should get the better of Johnnytheteaser.

Luath Leader (pictured below after winning at the Fethard Open Coursing meeting before Christmas) is the current holder of the Munster Open Cup but he may find it difficult to contain the pup Magical Eddie.

Hardy Lad has disappointed somewhat in trial stakes this season but the change of scenery over open country might bring about an improvement and he gets a tentative nod to win the third course.

The ‘Blueview’ runners have a great record in this event but the draw has not been kind on this occasion. Arise Sir Mark has a very similar profile to last year’s winner Toast Master. A very consistent third season performer, he has already won the All Age Cup at Ardpatrick/Kilfinane this season. With luck in running he will be hard to beat in the top half.

Rocky Hill ran really well at Dungannon this season and losing the final of the All Age Bitch Stake to Phoenix Tango was no disgrace. She should have the measure of Ardfert Timmy.

Hi Ball is the local runner having changed hands after running-up the Derby Trial Stake at Dundalk. A comrade of two fancied Oaks qualifiers, he will be expected to progress to the latter stages. Jesslikethat reached the final of the Slievenamon Cup at Crohane/Killenaule early in the season and while he hasn’t run as well since, he should win his buckle with Joans Boss. Finally we have two pups that very nearly made it to Powerstown Park. Isle Of Dreams ran-up to one of the Derby favourites Needham Simple at Castleisland and Rachmaninov was deemed unlucky by many at Sevenhouses two weeks ago. The red collar may just shade it. Assuming he has settled in well at his new kennel, Hi Ball could be the one to come out of this half and meet Arise Sir Mark in the final. With the advantage of being drawn in the top half of the card we nominate Arise Sir Mark to win this prestigious stake for Sir Mark Prescott and Tipperary Town based trainer Michael O’Donovan.

Meet at Monroe Sports Complex at 9.30am

First brace in slips at 10.00am sharp