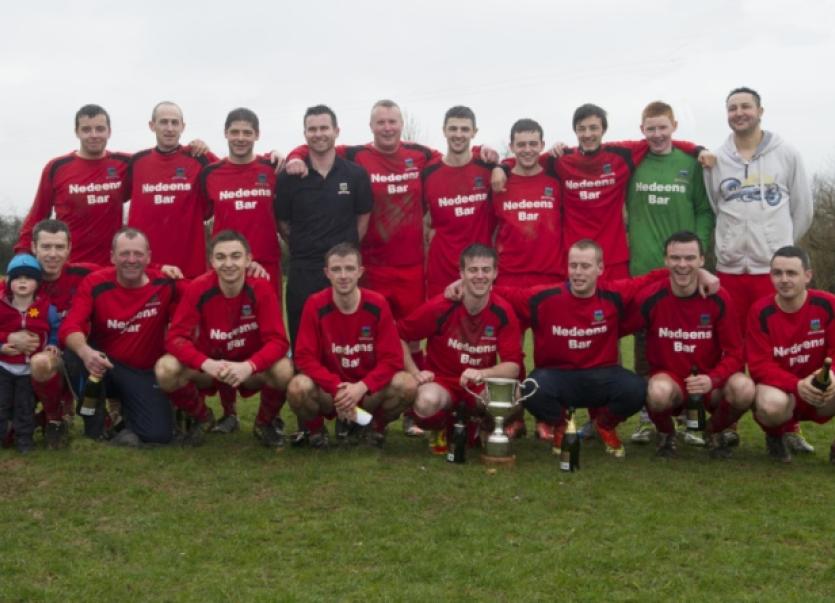 Vee Rovers celebrated their first divisional win in many a year with a very easy victory over a depleted Cashel Town team in Clogheen on Sunday afternoon.

The visitors rested many of their players with one eye on next weekend’s Cup final appearance, but that in no way takes away from the culmination of a huge amount of work done by all at the Clogheen set up all year, and they deserve full credit for their title victory.

The rout came courtesy of four goals from Martin Grant and a hat-trick by Warren O’Brien, with the final two goals coming through Cormac Crowe and Jimmy Haddu.

A special mention on the day also goes to founding member and lifelong supporter of the Rovers, Tom Quirke who savoured this victory in the week of his retirement, giving him two reasons to celebrate over the weekend.

Ballyneale ensure their Third Division status for next season when they took full points from already promoted Donohill and District and in the process ending the visitors slim title chances.

The opening goal of the game was scored by in-form Donohill striker Joe Shanahan, who added to his heroics in the Tipperary Cup last week with s goal after ten minutes.

It took until the second half for Ballyneale to respond, and they did within a minute of the resumption with a goal from Ger Crowley. This was added to on the hour mark by a strike from Mark Reilly, and the home side looked good to pick up all three points.

They were denied however, two minutes from time, when they conceded a penalty, and this was fired home by Shanahan to give both teams a share of the spoils.

Ballyneale were relieved at the final whistle knowing they will be back again in August.