Clare next on list as Tipperary get back on track 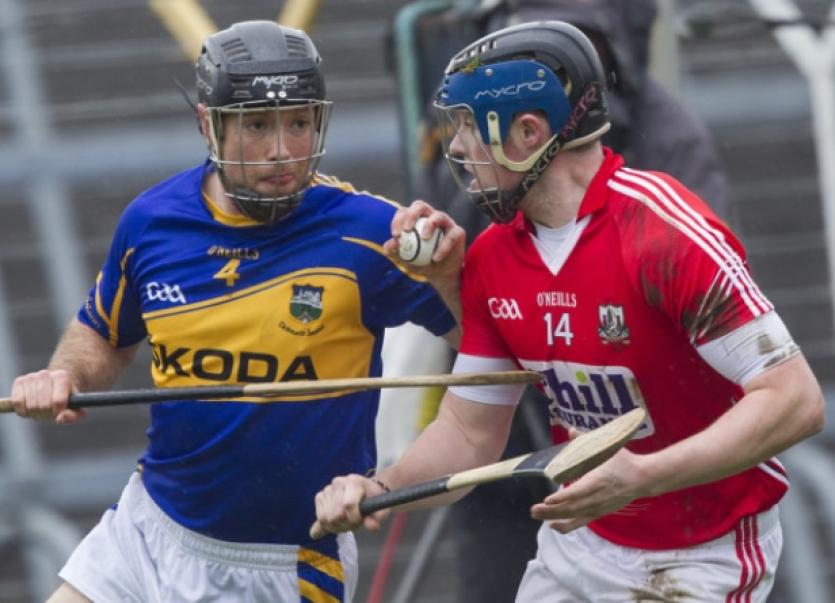 John ‘Bubbles’ O’Dwyer and Seamus Callanan led Cork a merry dance in Thurles last Sunday as Tipperary advanced to the semi-finals of the National Hurling League.

John ‘Bubbles’ O’Dwyer and Seamus Callanan led Cork a merry dance in Thurles last Sunday as Tipperary advanced to the semi-finals of the National Hurling League.

O’Dwyer notched 1-7 from play while Callanan added eight points, including four from play, to take his League tally to 5-40.

And this was good enough for Tipp to claim a three-point victory and a last four showdown with All-Ireland champions Clare in Limerick on Sunday fortnight.

Again, Tipp mixed the good with the bad in front of a disappointing 6,615 attendance at Semple Stadium.

Free-scoring Tipp racked up another big score but the big worry, and one that manager Eamon O’Shea admits he’s still trying to come to terms with, is the high concession rate at the other end of the pitch.

Tipp appeared to have stopped the rot with a clean sheet against Dublin seven days previously but four goals were leaked against Cork.

And having built up a 2-4 to 0-0 lead within eight minutes, Tipp were pegged back and trailed by two points at the break, a 12-point turnaround.

But when the chips were down in the second half, Tipp showed similar character to that on show against Dublin with Noel McGrath, Brendan Maher, Callanan and O’Dwyer stepping up to the plate.

Cork were admittedly understrength but Tipp were missing big players too with Pádraic Maher, Michael Cahill, Patrick ‘Bonner’ Maher, Shane McGrath and Lar Corbett all ruled out through injury.

There was a welcome return for John O’Brien, who appeared as a second half substitute after rejoining the panel last week, and Niall O’Meara scored a goal on his senior League debut.

James Barry, impressive after coming on as a sub against Dublin, grabbed his starting chance with both hands and the Upperchurch man has now emerged as a viable option for O’Shea ahead of the Clare game.

Ten different players got on the scoresheet and Denis Maher brought much-needed physicality to the half-forward division.

But from a defensive viewpoint, O’Shea and his opposite number Jimmy Barry-Murphy will have left Thurles with plenty of food for thought.

This game was pockmarked by 51 scores and in the white heat of championship, the kind of space on offer last Sunday will be at a premium.

But O’Shea continues to stress that Tipperary are a work in progress and in this regard last Sunday provided further encouragement.

Tipp were in big trouble after losing three games on the trot against Kilkenny, Clare and Galway but two wins on the bounce will have restored confidence to a huge degree.

Unfortunately, however, Tipp were the architects of their own downfall for two of Cork’s four goals.

Darragh Egan held onto his place in goal but his error resulted in a first half goal smashed home in trademark style from the 20m line by Cork goalkeeper Anthony Nash.

In fact, Nash has perfected his controversial style to such an extent that he was well inside the 14-yard line when he connected with the sliotar following an extravagant lift.

And Egan was at fault again five minutes from the end when he was caught in possession by Patrick Horgan, who tapped home a close range goal reminiscent of the one he scored against Dublin in last year’s All-Ireland semi-final.

But despite the needless concession of scores, Tipp did enough at the other end to set up a third competitive meeting of the season with Clare.

Denis Maher raised a green flag with just 36 seconds on the watch before O’Meara whipped home a fine goal in the seventh minute.

Tipp, playing against the breeze into the Town End, were off to a flier but Cork responded with a brace of Seamus Harnedy goals, before O’Dwyer kicked home a third goal for the hosts in the 32nd minute.

There was still time for Nash to almost burst the Killinan End rigging before half-time and at the break, Cork had rallied to lead by 3-11 to 3-9.

Cork would claim the only goal of the second half, from Horgan, after Tipp had moved six points clear.

And with the final play of the game, Nash had the chance to snatch a draw from the 20m line again but this time, Tipp’s massed ranks on the goalline held firm to clear the danger.