Tipp u-16s Ladies Football side in to All-Ireland final 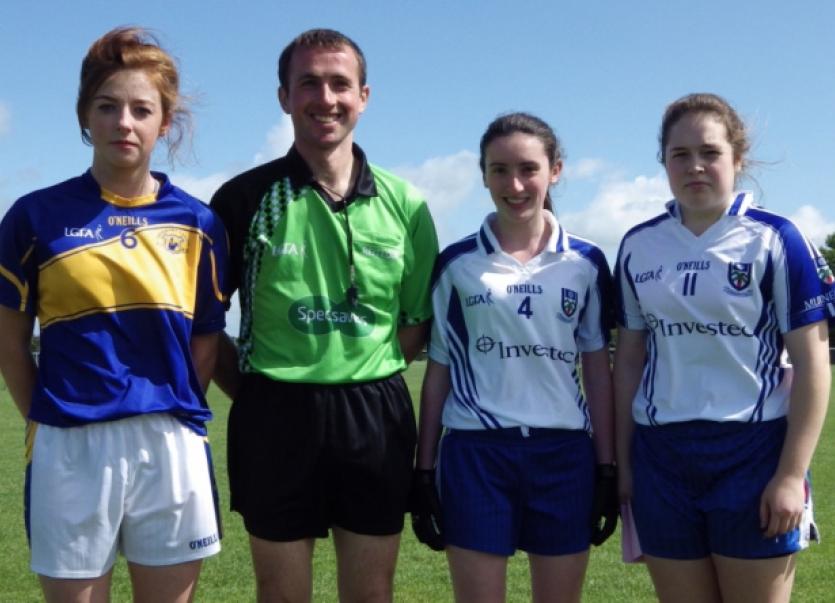 Under 16 B All Ireland Semi-Final

Tipperary Under 16 ladies have qualified for this year’s ‘B’ All Ireland final where they will meet Laois in two weeks time. At Kinnegadon Saturday last they comprehensively defeated Ulster champions Monaghan..

Having won the toss Monaghan opted to play with the strong breeze and were first to register a score in the third minute. Tipperary were finding the conditions tough and the wind was certainly a factor. Points from Aishling Moloney and Caoimhe Condon kept Tipperary in it but Monaghan were enjoying plenty of possession in their forward line and a goal followed in the fourth minute. Tipperary points from Aoibhe O’Shea and Caoimhe Condon kept Tipperary in the hunt but a second Monaghan goal followed in the 18th minute and one could feel the confidence flowing throughout the Monaghan ladies.

Tipperary forward Roisin Finnane goaled almost immediately after the Monaghan score and Tipperary were now matching Monaghan score for score despite playing into the strong wind. Caoimhe Condon goaled for Tipp on 21 minutes and Monaghan cancelled this out with a goal of their own a minute later. The Tipperary girls were playing energy sapping stuff having to carry ball from midfield in order to feed their forwards. Tipp’s third goal was scored by Caoimhe Condon and Monaghan replied with a point to leave the minimum between the side at half time, Tipperary 3-4 Monaghan 3-5.

Right from the restart Moloney and Corcoran for Tipp sent over four unanswered points to take the lead for Tipp for the first time. An O’Shea free and a huge long range point for Moloney added to Tipp’s lead before Monaghan finally scored a point in the 43rd minute. Three more Moloney points from distance were added before Monaghan got some relief with a goal of their own on 54 minutes. From the kick out play was brought up the field at speed and an O’Shea goal quietened the Monaghan resistance. Monaghan were not to score again and Tipp went on to add another two goals (Moloney and O’Dwyer) and two points (Kelly and Moloney) before the ref called time.

Tipperary Ladies Football will commence their Under 13 Development Squad on Saturday August 30th in Galtee Rovers GAA, Bansha at 10.30am.  Any players interested in the squad are asked to register on the day.

Best wishes to all the Under 12 clubs who will travel to Galtee Rovers GAA Club, Bansha on Sunday 24th of August to compete in the Tipperary Ladies Football Under 12 Blitz.  There will be 3 prizes - Cup, Shield and Plate.