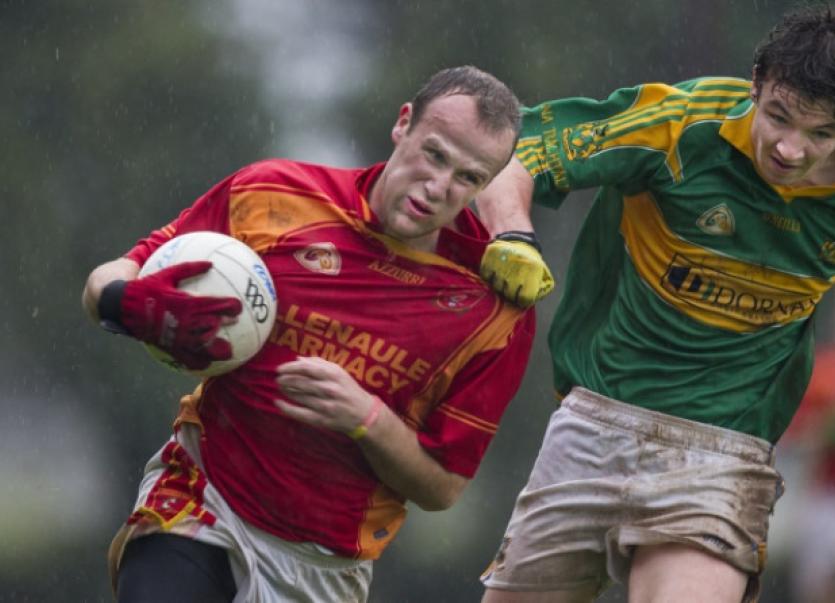 Killenaule are South Tipp senior football champions for 2014 following a hard-fought and entertaining final at Kilsheelan on Saturday last.

Killenaule are South Tipp senior football champions for 2014 following a hard-fought and entertaining final at Kilsheelan on Saturday last.

By virtue of their one-point win over reigning divisional champions Clonmel Commercials, Killenaule captured their second title in three years at Kilsheelan on Saturday.

The South Division’s showpiece football game of the year was served up in atrocious conditions. It was played out under grey skies and in a constant downpour from start to finish with very difficult underfoot conditions. Great credit to both sides for such a competitive encounter and to Derek O’Mahoney who refereed it sensibly in the circumstances.

Commercials had the benefit of the driving wind for the first half but only led 0-3 to 0-1 at the break. The Clonmel side’s scores came from Michael Quinlivan, Richie Carroll and Jack Kennedy with Tony Doyle replying for Killenaule.

Commercials suffered a huge blow in the 12th minute when Michael Quinlivan had to leave the field after an accidental blow to the head when going low to gather the ball.

An over-elaboration of passing by Commercials was playing in to the hands of the defenders and in the first half alone Commercials kicked 10 wides (15 over the hour). Credit to the Killenaule defence who frustrated the Clonmel lads to shoot ambitiously from distance. There were no soft scores to be mopped up on a dour day.

On the turnaround Commercials against the wind started well and Padraic Looram finished a nice move with a point after 90 seconds.

In the third minute of the half Richie Carroll was put through and just as he was about to shoot at goal Joe ‘Mouse’ O’Dwyer hauled him down to take a black card for the side. Jack Kennedy cooly scored the penalty for a 1-4 to 0-1 lead.

Killenaule hit back decisively with a goal of their own within a minute. A long range effort at a point from Michael Doyle came back off the upright and Gerry Kennedy reacted quickest to blast to the roof of the net.

The game’s decisive score came six minutes from time. Tony Doyle, impressing more as the game went on, put substitute Declan Fanning through, and using all of his experience Fanning gave Jake McDonald no chance with a scorcher.

Commercials threw everything at Killenaule in a late desperate attempt to keep their year alive but came up short by a single point at the end of the hour.

T.J. Maher’s well-managed side held on for a deserved win and Michael Fitzgerald proudly got his hands on the O’Shea Cup after the final whistle.