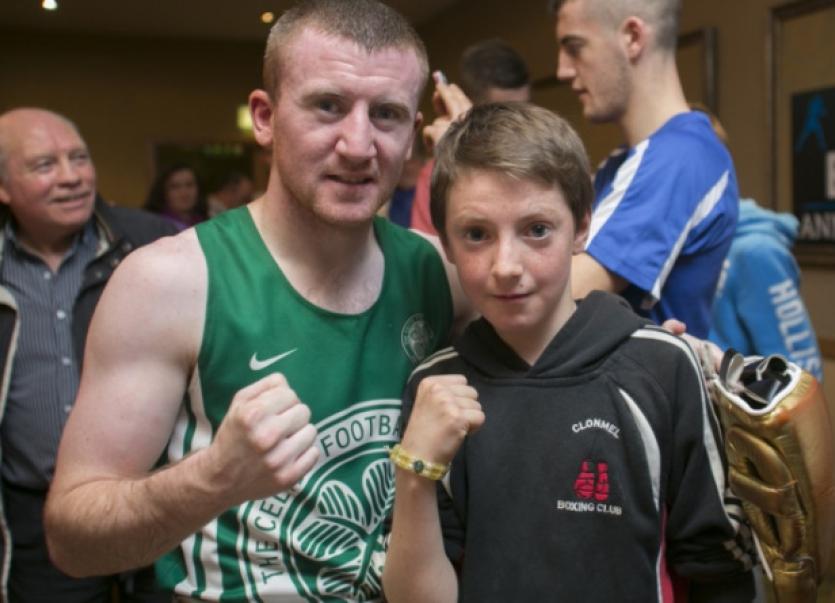 Jerome Gartland, representing Clonmel, faced Dane Finn, St. Nicholas. Finn had a lively start but Gartland claimed a well-deserved win. A battle between two Clonmel clubmates saw Jordan Sheehan take on Fearghal de Faoite. Both boys gave their all but Sheehan had that little bit extra to take the victory.

Kenny Dillon, Clonmel, showed great determination to withstand an early onslaught from Jack Lawlor, Thurles. Kenny stamped his authority on the bout in the second and third rounds to claim the win.

Clonmel’s Nathan Dalton gave a masterclass to take a well-deserved victory against the very game Arthur Geronimo, Thurles. Andrew Connolly, Clonmel, put in a big effort against the very skilful Peter Cawley, Dungarvan but he just came up short. In another battle between clubmates Liam McKenna took on Jamie Lonergan, with Lonergan having his hand raised in victory by the narrowest of margins. Jack Doyle, Clonmel faced Jordan Kennedy, St.Paul’s, Waterford in an all-action contest that saw the St. Paul’s boxer get the verdict.

Brendan Ryan, Clonmel was in against Stephen Power, St. Colman’s, Cork. Ryan started well but the Corkman finished stronger to win. Ben McGuire produced one of his best displays to date to take the victory against the very accomplished Tommy Finn, St. Nicholas. Irish international and World junior silver medalist Kurt Walker, Canal BC, Belfast was in control to beat the very tough Sean Benson, Limerick.