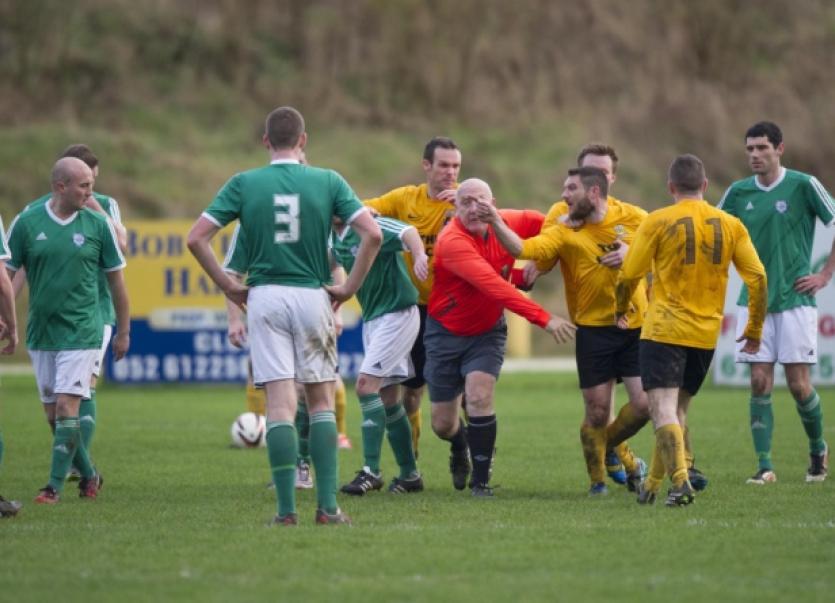 A Seanie O’Hara header on the hour mark was enough to seal a significant win for Clonmel Celtic that sees them through to Round 4 of the Munster Junior Cup and an away date with Limerick League side Newport in a fortnight’s time.

In the early part of this game Town looked set on redeeming themselves following their mauling at the hands of Celtic in the Tipperary Cup as they chased and quickly closed Celtic down. It was obvious that this was going to be a much closer affair as ties between these two sides normally are. But, although Town had most of the ball in the early stages Celtic had the first real opportunity on nine minutes when Graham Doyle played Seanie O’Hara in but Evan Comerford was quick off his line to block his effort.

On the quarter hour mark Town should have gone ahead when a defensive slip left David McGrath though on goal and when his effort was diverted into the path of Aidan McGrath it looked as if all he had to do was tap the ball into an empty net. However just as he was about to do so Ian Fahey appeared from nowhere to block a certain goal with a marvellous piece of defending.

In a closely fought encounter Celtic shaded the game for the next 20 minutes. Celtic continued to press and a brilliant cross field ball from Kevin Waters found Seanie O’Hara who powered into the Town box. When the ball found its way to Waters again his goalbound effort was cleared.

Town recovered and finished the half well and a powerful effort from Darren Burns was excellently saved by  Ciaran Kenrick just on half time.

The hosts started the second half on the front foot and Ciaran Kendrick was late seeing an Adrian Cleere shot but got down well to make a fine save in the 53rd minute. Two minutes later Kendrick again came to Celtic’s rescue when Raymie Condon got on the end of a dangerous corner but the keeper displayed a save pair of hands to continue a faultless display in the Celtic goal.

While the first half of this game had its moments the second period was a scrappy, disjointed stop start affair and it was entirely appropriate that the best piece of football produced during this period lead to what was to prove the winning goal. Ian Fahey, who was immense all afternoon, broke from defence and found Ross Condon who cleverly picked out Kevin Waters with a neat pass. Waters then made a sublime cross to the far post where David Joyce crossed into the path of Seanie O’Hara who gratefully nodded home just inside the post. It was a goal that deserved to settle such a tight game.

With 15 minutes left Celtic nearly made the game safe when David Joyce again set up O’Hara who worked tirelessly all afternoon but his tired looking effort didn’t bother the Town keeper.

Tempers flared near the end, and a player from each side saw red, but although Town pushed for an equaliser Celtic prevailed, leaving the hosts with only the league to chase from here on in.