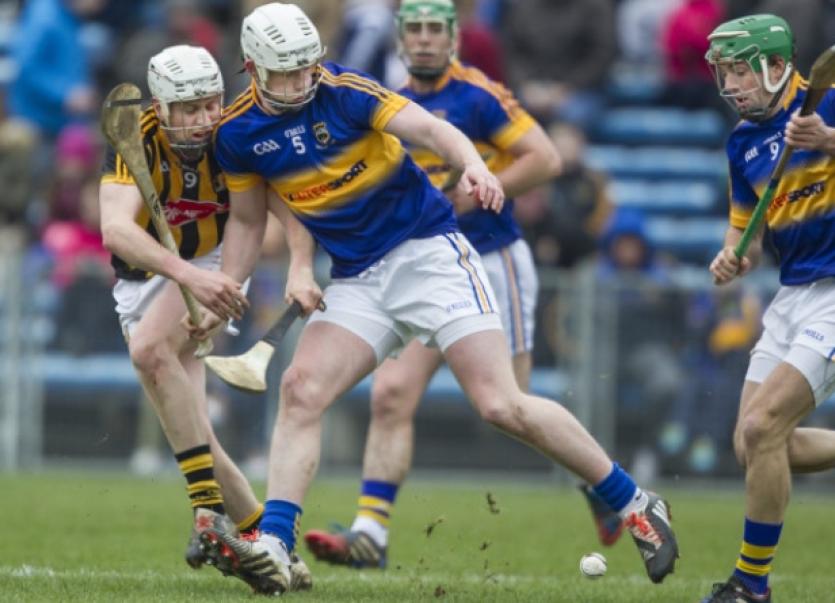 The sight of their team wearing their new Elverys-sponsored jerseys wasn’t the only novelty for Tipperary supporters at Semple Stadium on Sunday.

The sight of their team wearing their new Elverys-sponsored jerseys wasn’t the only novelty for Tipperary supporters at Semple Stadium on Sunday.

A 12-points victory, which sent them through to the National Hurling League quarter-finals, was only the county’s second win in their last twelve games in league and championship against The Cats, while the winning margin was Tipp’s biggest over Kilkenny since another league match in Nenagh in 1966.

Even in early spring, this was a day that Tipperary had been waiting for.

It was also the first time that Kilkenny have lost three competitive games in succession under Brian Cody, as the league champions for the past three seasons now face a relegation play-off to preserve their Division 1A status.

Understandably, Tipp manager Eamon O’Shea was keen to play down the significance of the victory - “take it for what it is, it’s a league game in March, it has no bearing on what’s going to come in any month”, he stated, although privately he must have been delighted with his team’s attitude and performance and with a win that he hopes has laid down a marker after another high-octane tussle between the counties, fought out in front of a sizeable attendance of 10,421.

Of course the result, eyecatching though it is, comes with a caveat - Tipp had a stronger lineout than Kilkenny who were shorn of their Ballyhale Shamrocks players, a contingent that includes Colin and Michael Fennelly, TJ Reid and possibly Henry Shefflin. Richie Power, Eoin Larkin and Padraig Walsh were other notable absentees. Because of that, and the results of their recent meetings Tipperary needed this win considerably more than their opponents did.

Even on a cold, grey day in March there was a championship edge to the game, the intensity and commitment reviving memories of those two great days in Croke Park last September. Tipperary were broadly comfortable after Niall O’Meara scored their second goal 19 minutes into the second half to establish an 11-points lead, but what unfolded before then was another compelling affair

Tipp’s dander was most definitely up, as they turned in their best performance since last year’s drawn All-Ireland Final. Here we go again, their supporters must have thought when Jonjo Farrell found the net after only 15 seconds when he seized upon the rebound after Walter Walsh’s effort had struck the upright. However in the second minute Padraic Maher set the template not only for his own man of the match performance but his team’s overall display when he broke through Richie Hogan’s tackle before firing a long-range point.

All over the field, for 70 minutes, Tipperary were fired up. Noel McGrath pointed in the 26th minute when he floored Richie Hogan with a tackle. Shortly before the second goal Cathal Barrett halted Walter Walsh’s dangerous-looking run with a meaty challenge but the decision of referee James McGrath to award a free went in Tipperary’s favour - Semple Stadium erupted and an incandescent Brian Cody leapt in anger and raged at the injustice of it all. It was that sort of day.

Kilkenny were a goal ahead before Tipp got a proper grip on a game that had an explosive start. Seamus Callanan, who gave Paul Murphy a torrid afternoon, seized Niall O’Meara’s pass and turned the Kilkenny full back before firing his team’s opening goal to equalise in the fourth minute. Two quickfire points followed from two more of Tipp’s star men, Bubbles O’Dwyer and Noel McGrath and they were never led after that.

Seamus Callanan’s free and points from play from Jason Forde, James Woodlock, Michael Breen and Callanan again had them six clear before four unanswered points from the irrespressible Richie Hogan - who scored all of his team’s nine first half points and kept them in the game - brought Kilkenny back into the picture.

However Tipp’s superiority was soon reflected on the scoreboard. Michael Breen was running the show at midfield, showing great maturity for a relative novice at this level. Padraic Maher turned in a majestic display in defence, occasionally rising like a salmon to pluck the ball from the sky, with Kieran Bergin, Conor O’Mahony and Cathal Barrett playing key supporting roles. Meanwhile, the workrate of Brendan Maher and James Woodlock provided the platform for Bubbles O’Dwyer, Seamus Callanan, Noel McGrath and Niall O’Meara to flourish in the space they created.

A minute’s silence was observed before the start in memory of Tony Reddin and the great man would have been impressed by the save that current goalkeeper Darren Gleeson made at his near post from Walter Walsh late in the first half, as well as the double block that Darragh Egan (who replaced the injured Gleeson) made in the second half.

Tipp led at the break by 1-16 to 1-9, that first half total eclipsing Kilkenny’s final tally.

Remarkably there were just four scores in the opening 19 minutes of the second half but the game was no less absorbing for that. Kilkenny had the lion’s share of the possession but a combination of poor finishing and stubborn Tipp defending, as they soaked up an amount of pressure, meant that the distance between the teams was never closer than 6 points. Richie Hogan saw his 42nd minute penalty blocked by Brendan Maher and when Niall O’Meara scored the second goal, when he was set up by Seamus Callanan’s persistence, there was only going to be one outcome.

While the scoreline might have flattered them slightly Tipp could have had a third goal when Eoin Murphy made a double save from Noel McGrath and Michael Breen nine minutes from the end, before Darragh Egan denied Jonjo Farrell at the other end as well as blocking the rebound.

On a very satisfactory day at the office, Tipperary - who had nine different scorers, compared to Kilkenny’s four - restricted Kilkenny to just four points in the second half.