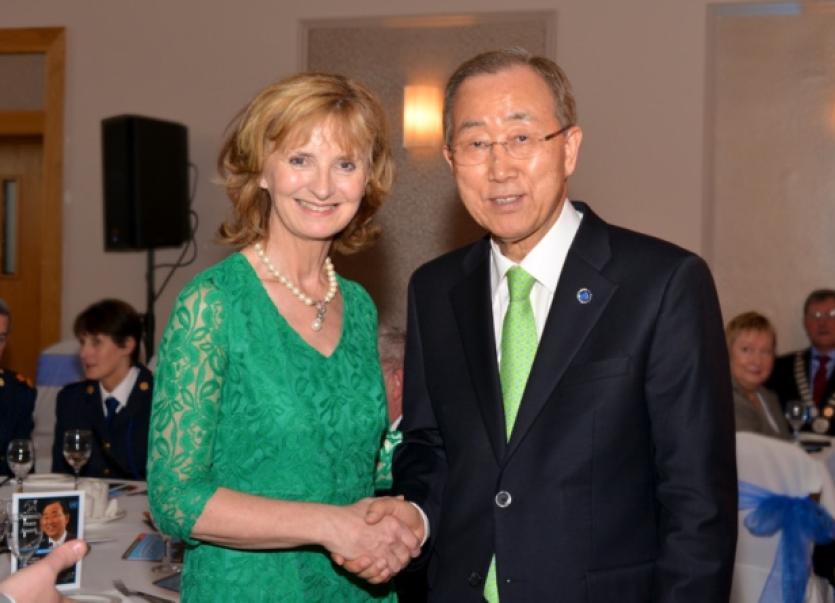 Her Chernobyl Children’s International is helping to save thousands of children’s lives in the country but the project is at risk becasuse of the conflict in the east of the country between government forces and Russian-backed separists.

“Children’s lives are at risk”, she told Mr Ban when she met the UN boss in Tipperary town on Sunday evening when he received the Tipperary International Peace Award.

The Tipp woman, who has devoted her life to the welfare of children in the Chernobyl area since the nuclear disaster in 1986, met Mr Ban on the fringes of the event. She later told The Nationalist that she was delighted to get the opportunity to make her case to Mr Ban and that he listened closely to what she had to say.

The Irish funded “flying doctors” mission in Eastern Ukraine is a cardiac missions programme helping to save the lives of the 6,000 children who are born with genetic heart defects each year in the war-torn country.

“It was hugely important to brief Mr Ban on the seriousness of the situation in Eastern Ukraine as its most vulnerable children are the latest victims and their lives are dangling in the balance”, she said.

She said the current mission started last weekend when the aid agency managed to fly in a team of Irish-funded international cardiac surgeons close to the conflict zone to carry out life-saving operations on up to 40 of the most critically ill babies and children who urgently require surgery.

“For many of these children, this is a race against time as most of them would die between the ages of three and five were it not for the intervention of CCI and funding from the Irish people. We are the only organisation working in the Chernobyl area to be accredited with official UN NGO status and it is a great honour to be invited to this awards ceremony as part of the UN ‘family’. It is further recognition of our work helping children in the Chernobyl region for almost 30 years”, she said.