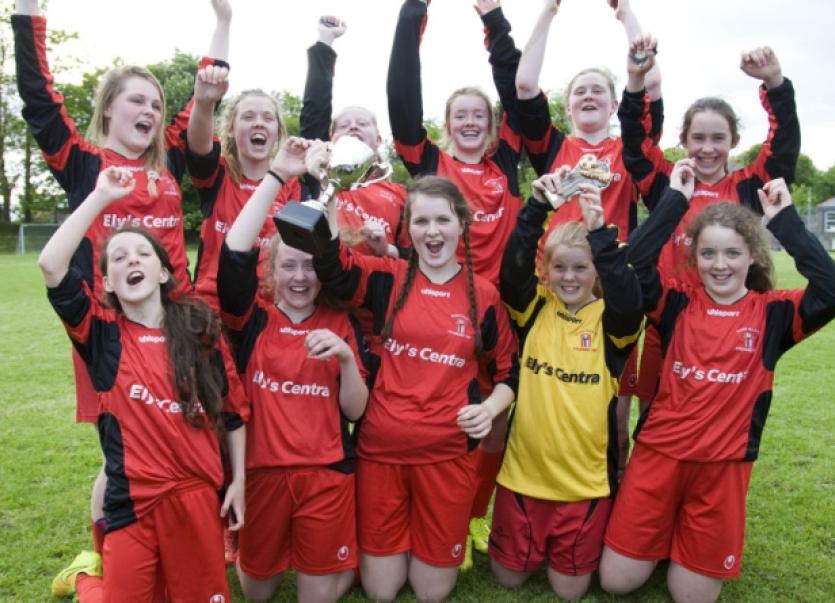 Peake Villa’s u16 girls capped a fine season for the club when they stunned hot favourites Cashel Town in the final game of the schoolgirls season, and won their first ever Tipperary Cup.

That they did it on the home ground of their rivals made it all the sweeter, as they put a well thought tactical plan into action, which the Cashel girls couldn’t match. Unbeaten in the league campaign the home side started this game on the front foot, and had a couple of half chances which the Thurles girls kept out through a combination of last gasp defending and excellent work in the goal by Saoirse Teer.

However, when they did attack themselves they found an uncharacteristically shaky Cashel defence and only for a couple of excellent saves by Cashel’s net minder Sorcha Clark, Peake could have taken an early lead just as easily. The game then became a one way procession for the middle part of the half as it looked like Town only needed to score once and the dam would burst, but the clear chance just didn’t present itself.

And they had cause to rue what efforts they did spurn, when five minutes before the break, Villa broke downfield, and after another defensive mix up, Saoirse O’Meara sneaked in and fired the Thurles girls in front.

This was how it stayed at half time, and in the second half, Cashel threw on Aisling Maguire and Caitlin Beatty Green to heap pressure on in attack, but it looked like it was in vain, until they were awarded a penalty kick ten minutes before the end.

Alas for them, Teer was inspired in the goal, and despite being the youngest player on the pitch, capped a girl of the match performance with a brilliant save from the spot kick.

This spurred her team on again, and with Cashel committing players forward, the visitors almost broke away on two occasions to get what would have been the insurance goal, but which wasn’t needed in the end. There were joyous celebrations at the final whistle from the large Thurles support, and there was no doubt that the girls deserved the Cup they were presented by League development officer Brendan English. He also congratulated the Cashel girls on their recent league success and complimented the two teams on a wonderfully competitive and sporting match, which was a brilliant advertisement for schoolgirls soccer in the county.