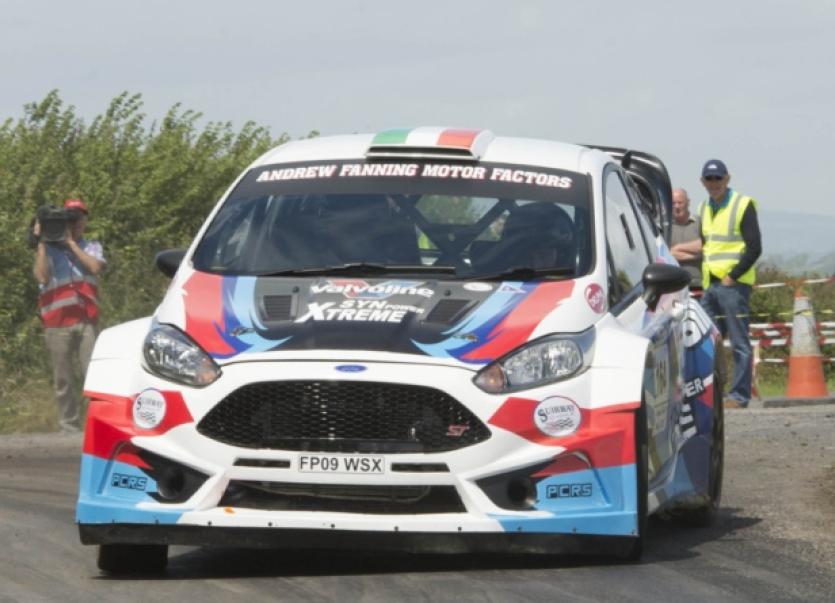 The nine-stage event has its headquarters at the Clonmel Park Hotel from where the cars will set off on Sunday morning. O’Riordan won last year’s rally by some 45 seconds and has made only sporadic appearances this year. On his last outing the Midleton driver finished sixth overall in the Donegal International Rally.

Monaghan’s Josh Moffett, also in a Ford Fiesta WRC, will provide strong opposition for O’Riordan. On the same weekend that O’Riordan was competing in Donegal, Moffett crashed out of Rally Ypres, a round of the European Rally Championship.

Welsh driver Steve Wood, who was third in last year’s rally returns to Clonmel in his Subaru WRC and should be at the cutting edge of proceedings.

London based Cork driver Michael O’Brien will compete in his Ford Focus WRC, he participated in the Raven’s Rock Rally at the end of June and finished fourth overall, one of his best performances of the season.

The event will feature the debut of Antrim’s Desi Henry in his recently acquired Skoda Fabia S2000. Indeed, it will be interesting to see how his times compare with the WRC brigade.

Cork’s Daniel Cronin, the younger brother of triple British rally champion Keith is seeded at number six in his S9 Subaru WRC. The young Ballylickey man has won the Banna Beach Rally in Kerry and is certainly capable of a top three finish.

The top ten is completed by Cahir’s Don Keating in a Subaru, interestingly, Don will be co-driven by Cork’s Nicky Condon, who also co-drove for Don’s father Donie a few decades ago.

Cashel’s Pat O’Connell (Mitsubishi EvoIX) fresh from winning the Kerry Rallysprint for the third year in succession is the leading Group N driver.

Meanwhile, Clonmel’s Pat Kearney in the Sepam liveried Mitsubishi EvoIX is another of the Group N contenders.

From a Clonmel perspective and aside from Pat Kearney, drivers such as Michael Ormond (Honda Civic) and Andrew Sheehan (Honda Civic) are also competing.

The rally is the fifth round of the Suirway Group South East Rally Championship with London based Michael O’Brien leading the way with 84 points – six ahead of Monaghan’s Mickey Conlon. Kilkenny’s Joe Connolly will debut his all-new Ford Fiesta R5, it will be the first time that he will compete in a four-wheel drive car.

The rally organised by the Tipperary Light Car and Motorcycle Club with John Ward as clerk of the course have selected a three-stage loop that will be repeated three times with servicing after the first and second loops. The opening stage, Poulmucka is between Clonmel and New Inn while the second stage, Knockgraffon is in the Cahir/New Inn region and the final stage of the loop, Tubrid, used many times in the past is close to Cahir/Ardfinnan.

Once again, the Powerstown Racecourse complex will be utilised as the location for mechanical scrutiny that takes place on Saturday from 2pm until 7pm. while on Sunday, it will be used as the service park. Sepam are the title sponsor while Clonmel Park Hotel and Andrew Fanning Motor Factors are co-sponsors and the service park is being sponsored by Morrison BMW.