Ballyporeen come from nine points down to claim title 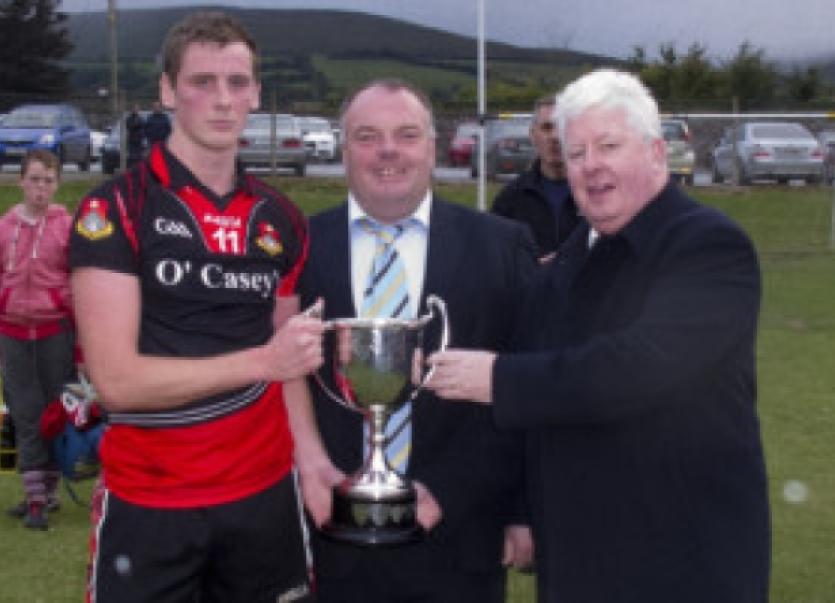 They turned a nine point deficit into a three point victory at the end of an amazing final against Clonmel Commercials in Newcastle on Sunday evening.

Playing the more assured football for long periods, Commercials looked well on their way when Eoin Leahy’s goal put them nine points ahead seven minutes into the second half. But Ballyporeen’s refusal to accept defeat slowly but surely turned this game their way as half time substitute Eoin Kearney began to take control of midfield and Daragh Lyons and Conor Sweeney led the charge against a Commercials team who faltered as the game intensified. Ballyporeen drew level with a Daragh Lyons goal two minutes from time and then went on to hit three points in a minute to sensationally clinch the title.

Indeed all that excitement was a far cry from the pedestrian opening quarter in which both sides struggled to find any rhythm. Two Conor Sweeney points each side of a Jason Barnes effort left Ballyporeen ahead after fifteen minutes Eventually this final came to life as Commercials, through Eamon Hanrahan and Stephen Buckley at midfield, began to assert their more direct approach on the game. With wind advantage Ritchie Gunne, Liam Murchan and Paidie White in particular were causing the Ballyporeen backs all kind of trouble.

They dominated the second quarter and points from David Lavin (2), Jason Barnes and Eamon Hanrahan and an excellent goal from Ritchie Gunne, after great work by Stephen Buckley and David Lavin, had them well on top. Indeed were it not for a great save by Mikey Sweeney in the Ballyporeen goal from a Jason Barnes effort things could have been worse for an out of sorts Bally as they went into the break just six points down on a scoreline 1-5 to 0-2.

Even with wind advantage the early stages of the second half didn’t bring any cheer for the Ballyporeen supporters. Paidie White extended the Commercials lead with a point soon after the resumption and although Daragh Lyons got one back for Ballyporeen it looked like the writing was on the wall for them when Eoin Leahy rounded David Russell to crash the ball to the back of the net to open a nine point lead for Commercials.

At this stage Commercials were dominating in every sector of the field and one wondered how or if Ballyporeen could get a foothold in the game.

Their response was to bring their half time substitute Eoin Kearney to midfield with immediate effect. Commercials were no longer able to count on clean primary possession and as Daragh Lyons, John Martin, Eoin Morrissey and Shane Molan began hoovering up the breaking ball, Ballyporeen began the long road back. Points from Conor Sweeney (2), substitute Fionan O’Sullivan and Tommy Sweeney reduced the deficit to five by the end of the third quarter as Commercials began to lose their way and found the new intensity that Ballyporeen were bringing to the game too much to handle.

In the 50th minute Jason Barnes pointed a Clonmel Commercials free to reopen a six point gap but this was to be their last score of the game as Ballyporeen continued to chip away at the deficit. Three pointed frees from Daragh Lyons and Conor Sweeney (2) had the margin down to three with three minutes left. Ballyporeen needed a goal and when Daragh Lyons was put into space in front of the Commercials goals there was only one thing on his mind as he drove the ball to the net past a helpless Michael Boland. With their tails up and their supporters’ cheers ringing in their ears, Ballyporeen went in for the kill. Eoin Kearney put them ahead with a well taken point from thirty metres, Danny Barrett capitalised on a poor clearance to put them two up and fittingly it was man of the match Daragh Lyons who finished off the scoring - and Commercials - with a fine point just before the final whistle to bring the title back to a very deserving Ballyporeen.