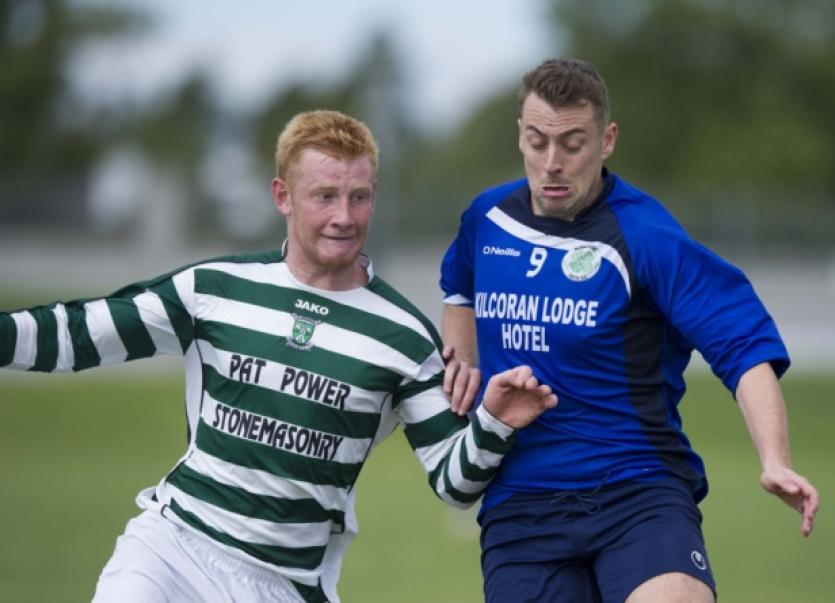 Rosegreen got their first points of the season on Sunday with an excellent away performance against St Nicholas. The away team were quickest out of the blocks and took the lead in the 18th minute through Darragh Browne from 20 yards out. Nicholas hit back almost immediately though, as Eoin O’Riordan slotted home a penalty after Philip O’Doherty was fouled. Sean Mc Cormack then restored the Rosegreen lead on the hour and they caught the home side cold again two minutes into the second half when Jose Adrino doubled their lead. With 20 minutes left, St Nicholas cut it back to the minimum as Aiden Riordan headed home, but try as they might to breach the Rosegreen defence, it was the away side who went home happiest after securing their first three points.

Borris leapfrogged their hosts into second place in Galbally on Sunday. But they did so after initially coming from behind as it was United’s Quinn Perry who opened the scoring on 15 minutes from the penalty spot. This led to a rush of goals with three more in the next 15 minutes when Mark Darmody and Anthony Healy hit back for Borris, and a Ricky Slattery header evened it up at half time again for the home team.

It was the blistering start that Borris made to the second half that made all the difference here, and Darren Ivors had them back in front only three minutes into the second period. A second goal from Anthony Healy ultimately put the points beyond Galbally as Borris move closer to the First Division summit.

Rovers recorded their third win on the bounce, to put them on top. They settled quickest in this one, but it took them 36 minutes to take the lead, as Ciaran Stapleton tapped in a David Grey cross. The pattern of the second half followed the first and Rovers had to wait until eight minutes before the end before Youcef Brahimi hit their second goal. With three minutes left, Shane Egan tapped in a goal for Bansha to set up a exciting finish.

Killenaule secured their second point of the season with two late goals to thwart a strong Tipp Town outfit. The home side fell behind to an Adrian O’Dwyer finish from a long throw into the home sides penalty area on the half hour. They were caught cold again right after the break with Peter Hanlon chipping the keeper from close in. Five minutes from time Michael Hickey finished after a mazy run and Ger Ivors completed the home comeback two minutes later.