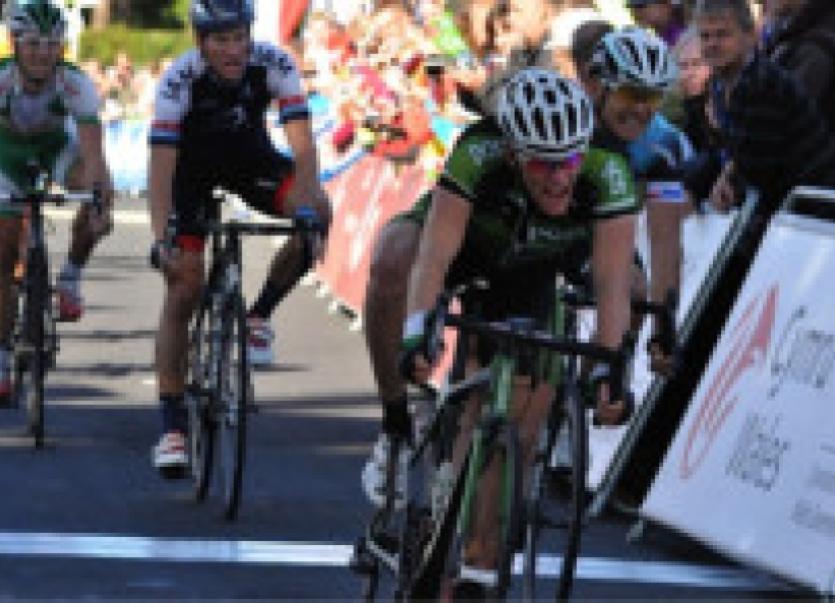 Cyclist Sam Bennett has enjoyed an incredible week of success competing with global stars such as Sir Bradley Wiggins and Mark Cavendish securing a stage win and two second places in the Tour of Britain.

Cyclist Sam Bennett has enjoyed an incredible week of success competing with global stars such as Sir Bradley Wiggins and Mark Cavendish securing a stage win and two second places in the Tour of Britain.

The Carrick cyclist last Friday out sprinted the field to take stage five in the Tour of Britain which was won on Sunday by Wiggins. Sam Bennett finished second in the sprint on the final day on Sunday when the stage was won by Cavendish for the third year in a row. It was an incredible occasion for 22 year old Sam Bennett as he took the stage honours in Caerphilly which highlighted the awesome form he is in at the moment.

The Carrick man soared over the two category one ascents of Caerphilly Mountain before edging out Michael Golas (Omega Pharma-Quickstep) and Martin Elmiger (IAM Cycling) in a sprint to the line.

“Sam got himself into a great position and he was just so strong. When he is in this kind of condition he is very hard to stop. He led coming over the final ascent of the mountain and he timed his attack really well. It was one of the toughest stages so far, so I am delighted for him and the team,” said team manager Kurt Bogaerts.

A son of Michael and Helen Bennett of Carrick, the victory was celebrated in Carrick as well as in Clonmel where his mother hails from. The An Post Chain Reaction Sean Kelly team rider had narrowly missed out on a stage victory in stage two and after landing the stage victory on Friday he also put in a great performance on the final day of the tour on Sunday finishing second in the stage. The day before his stage victory Sam was named in the Irish team along with Tour de France stage winner Dan Martin, Yuelta a Espana stage winner Nicholas Roche and Matt Branmier to take part in the World Championships that are taking place in Florence this week. Sam will ride with his team members on Sunday in the elite mens roadrace.