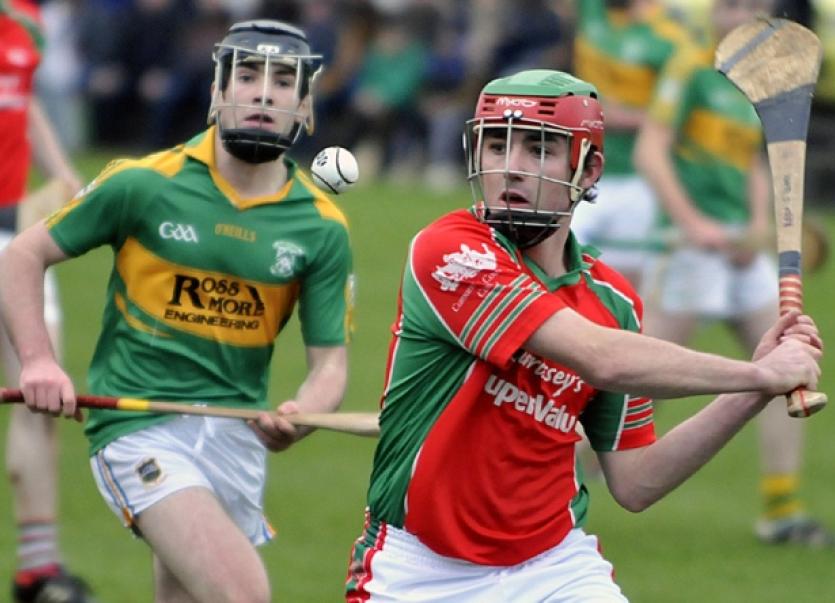 The winners went into the contest as favourites and after the first fifteen minutes there was no doubt they deserved the tag and they grew in stature as the game progressed.

They were the superior team with outstanding players in all the key positions. Their physical strength, their striking ability, their speed on the ball and the ease with which they could score put them in a different class to their opponents.

The game started off at a lightning pace in perfect conditions for the first day of December. Cashel matched the champions and kept in touch with them on the scoreboard during the opening quarter at the end of which Clonoulty led by 1-6 to 0-5. Paul Hayes scored the goal in the tenth minute when a blocked ball came into his path and he put it away in style.

However, the signs of Clonoulty’s superiority were already beginning to show as their very effective half-back line gradually reduced the amount of ball coming into Cashel’s forward line.

During the second quarter Clonoulty pulled away and added on 1-6 to their total while confining Cashel to two points. Clonoulty’s second goal came from a melee in the Cashel goalmouth and Stephen Quinn eventually put the ball away. They led by 2-12 to 0-7 at the break.

Cashel tried hard to rescue something from the game during the second-half but they had a mountain to climb. They did score two goals, Jonathan Grogan deftly touching home the first after nineteen minutes and Dylan Fitzell getting the second from a free in the twenty-fifth minute.

But the scores were too few to stem the inevitability of Clonoulty’s victory. Sean Maher’s goal in the fourteenth minute was the final mail in the coffin for Cashel and the final score was 3-20 to 2-11.

Clonoulty got a man-of-the-match performance from Conor Hammersley but they had other outstanding contributions from the half-back line of Jimmy Maher, Ciarán Quirke and Ronan Heffernan, Martin Sadlier at centre-field and Sean Maher and Paul Hayes in the forward line.

Not many Cashel players added to their reputations but Dylan Fitzell, Robert Anglim, Cathal Minogue and Michael K. O’Dwyer deserve mention for their efforts.

After the game the Tony Brennan Cup was presented to the winning captain, Martin Sadlier, by board chairman, Tom English. He congratulated Clonoulty-Rossmore on their victory and wished them the best against Thurles Sarsfields in the county semi-final. In his reply the captain thanked the players for their performances and the team mentors, before calling for three cheers for Cashel King Cormacs.

Before the game there was a minute’s silence for Paddy Shanahan, Clonoulty-Rossmore.

Under 21 Hurling: County semi-final v Mid Champions on date to be fixed within the coming weeks.

The Eire Og club AGM is fixed for Friday, December 13 in the GAA Clubrooms, Annacarty.

The Eire Og club extends its sympathies to the family of Paddy Quinn, Pallas, former player and Club Officer who died during the week. Also sympathies to the Ryan family, Lisheendarby on their recent bereavement.