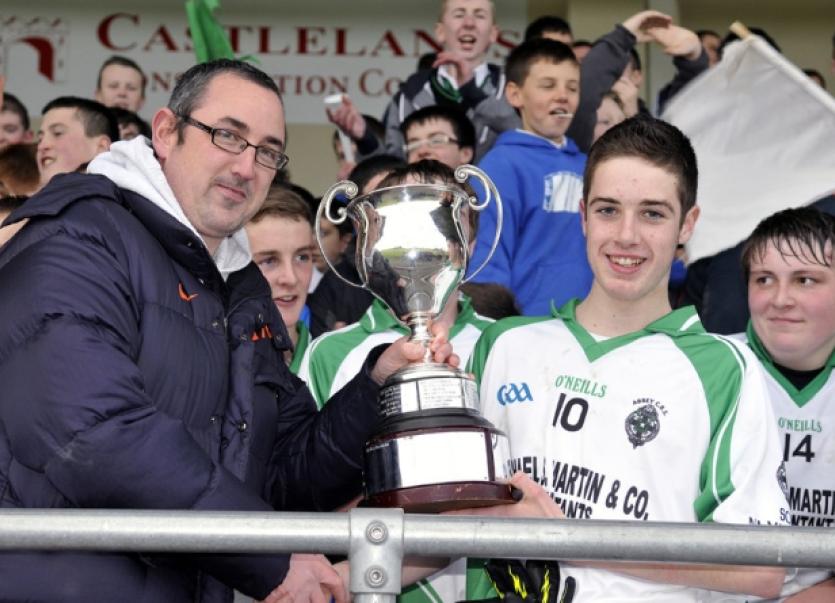 Coachford started the brighter and had two pointed frees through the boot of David Thompson inside the opening six minutes.

Abbey gradually settled into the game and Zac O’Halloran, after some neat footwork, placed Shane Ryan for their opening score in the seventh minute.

A minute later Ryan again was tormenting the Coachford defence when he latched on to a great pass from centre-back Stephen O’Brien and finished to the Coachford net.

Abbey had settled into the game now with the defence in particular led by Niall Heffernan, Matthew Moroney and Conor Leahy keeping a tight rein on the lively Coachford forwards.

The second Abbey goal came in the eleventh minute after tigerish play from Conor Leahy led to a flowing move involving Kieran Breen, Conor O’Dwyer and Fergus Halligan putting Cormac Maher through on goal and he finished off the move in style for a great team goal.

Maher added a further point minutes later and this was added to by Shane Ryan and Zac O’Halloran in the second quarter. The Abbey defence had to cope with a lot of pressure during this period but an excellent defence, marshalled by the very impressive Ben Quinn in goal kept Coachford from adding to their total. At half-time the Abbey led 2-4 to 0-2.

The Abbey started the second half very well, attacking at every opportunity with the half-back line trio of Conal Donovan, Stephen O’Brien and Fergus Halligan excelling. Shane Ryan and David Thompson swopped pointed frees. Entering the final quarter the Abbey were in the ascendancy all over the field and the victory was assured in the 52nd minute when a smooth passing move instigated by the industrious Darren O’Dwyer was carried on by ace target man Arnold O’Dwyer and Cormac Maher and finished expertly by influential substitute Nathan Murphy-Crowe.

The same player forced the Coachford goalkeeper Aaron O’Riordan into a superb save as tipped over the bar a stinging drive from Murphy-Crowe in the 54th minute after excellent approach work from Kieran Breen. Liam Twohig did convert a free for the Cork school as the game entered injury time but it was the Abbey and that man Ryan that had the last say as he split the posts with the last point of the game.

At the final whistle Abbey players and supporters celebrated a well deserved victory.

It was a strong team performance that led to the Abbey annexing their fifth title at this grade. The Abbey goalkeeper and defence were magnificent as Coachford failed to score from play over the hour. Darren O’Dwyer was prominent at mid-field, while Shane Ryan, Cormac Maher, Zac O’Halloran and Nathan Murphy-Crowe took the scoring plaudits amongst the forwards.