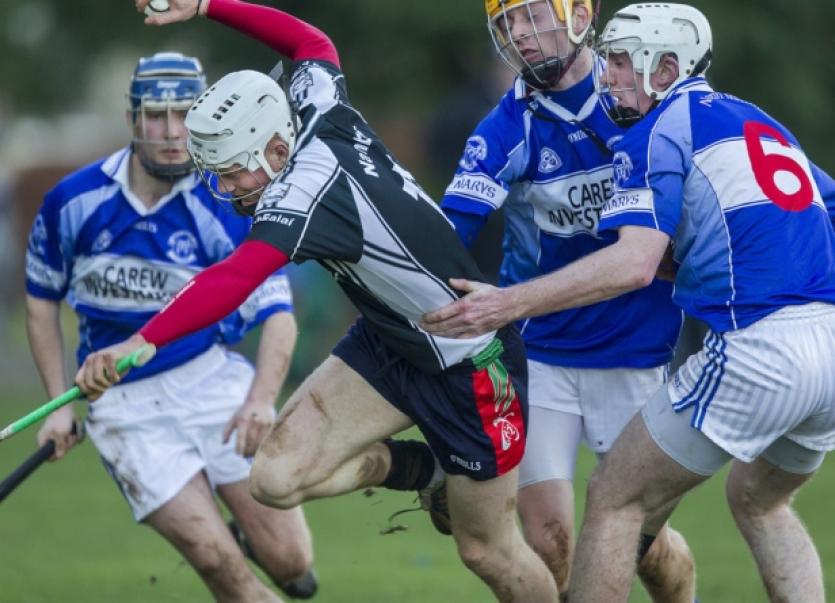 Carrick Swan regained the South U-21 ‘A’ hurling championship title with a slender victory over St. Mary’s at Kilsheelan on Saturday last.

Carrick Swan regained the South U-21 ‘A’ hurling championship title with a slender victory over St. Mary’s at Kilsheelan on Saturday last.

The relief at the full-time whistle was palpable though with the Clonmel side making the winners defend to the very end. St. Mary’s will argue they had their chances to win - and they had - but full credit to Carrick Swan for refusing to gave way in a fiercely contested second half.

Goals win games they say, and in this case it was a very early green flag from Swan centre-forward Bill Walsh that proved so vital. It was to be Swans only real effort at a goal all day and they took it; Mary’s, on the other hand, had at least three chances but took none. That was the difference between winning and losing.

Mikey Loughman opened the game’s scoring with a second minute free for Swan and just a minute later Bill Walsh soloed through the Clonmel defence to blast to the net to give the Carrick boys the start they would have wanted.

St. Mary’s needed to get to grips with matters and a nice point from Jason Lonergan followed by a Gearoid Buckley free settled the nerves.

Jack Walsh, who put in a good performance over the hour, hit two sweet points from the wing in a two-minute period to again put Swan four up.

Back came Mary’s with full-forward Liam Murchan pointing after hard work by Gearoid Buckley and then man-of-the-match Seamus Kennedy hit a long range free to leave it at 1-3 to 0-4 after 11 minutes of non-stop action.

The Carrick side were looking the sharper with their shooting though and they tagged on four unanswered points in a dominant five minute spell to leave Mary’s a half dozen adrift and worried.

Midfielder Lee Wall, Bill Walsh (2) and a Mikey Loughman free made up the four scores, but one of Walsh’s points might have been a goal chance had he opted to go low.

Six points to the good after 18 minutes, the Swan were going nicely and St. Mary’s needed to respond. They answered with four of the next five points as Seamus Kennedy and Gearoid Buckley came more into the game.

A Buckley free was cancelled by a superb point from Jack Walsh for Swan, before late first half points from Buckley, Darren Cass and a monstrous free on the stroke of half-time by Seamus Kennedy left it at 1-8 to 0-8 at the break.

St. Mary’s re-started better and a point by Darren Cass followed by a free from Kennedy reduced the lead to the minimum within five minutes. The Kennedy free was interesting in so far as it was flagged wide by the umpirest but overruled on the recommendation of the linesman.

The challenge had been thrown down to Swan and doggedly from their to the end they stood firm.

Over the next 20 minutes the game ebbed and flowed with some fine passages of play, good scores and determined defending.

St Mary’s outscored Swan 5-4 and had the game level on 54 minutes. The Clonmel points came from Liam Ryan, Jason Lonergan, Gearoid Buckley (2) and an inspirational midfield effort from Seamus Kennedy. Swan hit back each time through Lee Wall (2), Jack Walsh and Mikey Loughman with a free.

All square at t 1-12 to 0-15 with five minutes to go it looked as if St. Mary’s were getting on top. Crucially they were never to get their noses in front. In the last five minutes Swan rallied with their half-back trio of Colin Loughman, Colin Waters and Dale O’Hanlon standing firm.

Mikey Loughman’s free put Swan ahead again before the same player set up with Bill Walsh to extend the lead to two on 59 minutes.

Gearoid Buckley pointed a close-in free for St. Mary’s to keep the pressure on before Swan sub Evan Hogan then made space for himself to fire over the last point of the game.

Right at the end St. Mary’s had a wonderful chance to win it. Darren Cass got in behind the defence but his attempt at glory was well saved by Kieran Lonergan and with it St. Mary’s fate was sealed.

It was that close at the conclusion of a great hour’s hurling but if for nothing other than their absolute never-say-die attitude on the day, Swan just about deserved victory.

Subs: Richie Gunne for Murchan; Eric Walsh for A. Ryan.