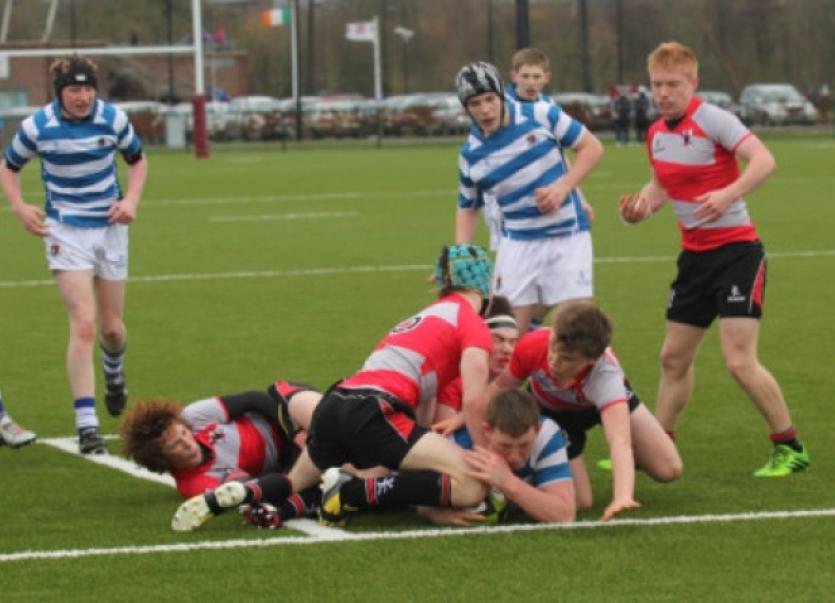 The first try rule proved costly for Rockwell College in the first round of the Munster Schools Junior cup played at the University of Limerick’s all-weather arena on Wednesday last.

The first try rule proved costly for Rockwell College in the first round of the Munster Schools Junior cup played at the University of Limerick’s all-weather arena on Wednesday last.

The Tipperary side conceded an early try at the first ever Munster Schools Junior cup fixture to be played at the all-weather arena.

And with the 5-all scoreline failing to separate the teams it’s Glenstal who emerged victorious by virtue of having scored the first try.

Playing against a strong breeze Rockwell settled quicker of the two sides and should have been ahead after 11 minutes. A superb block by Rockwell outhalf Paudie Feehan on his opposite number Ben Healy saw the ball break for Rockwell No. 8 David Cashman. The big backrow forward opted to kick ahead when probably picking and going would have been the better option before fullback Ben Molony got back to make the covering tackle with the line open.

The miss was to prove costly to Rockwell as just six minutes later Glenstal were awarded a fairly innocuous penalty, given the strong breeze, just outside the Rockwell twenty two. The resultant penalty saw Rockwell prop Michael Kennedy sin binned for failing to retreat and when outhalf Healy eventually took his kick it went straight into the corner. Rockwell’s hesitation in defence saw the referee after consultation with the touch judge decide that Glenstal centre Charles Gavin had dived on the loose ball ahead of Rockwell winger Garry Kavanagh putting the Limerick men ahead.

Rockwell, almost stunned by the try, did come back into the encounter and forced several scrums inside the Glenstal twenty two before halftime. From one such set piece Glenstal prop Henry Downing who had been repeatedly warned by the referee for his lack of binding was sent to the bin.

Rockwell coaches Kevin Leamy and Pat O’Connor certainly had their troops fired up for the second half and after just five minutes a well-worked rolling maul from Rockwell saw second row Mark Collins ground the crucial score with outhalf Feehan unlucky not to add the extra.

Indeed the second half was one Rockwell were to dominate with Glenstal rarely out of their own half. Time and time again Rockwell gained good territorial advantage inside Glenstal’s twenty two only for poor handling to let them down. Backrow David shaw was unlucky after 44 mins when after a huge drive from the Rockwell pack referee Houlihan ruled that the big Horse & Jockey man’s effort had not crossed the line. Ten minutes from time there was more heartbreak for Rockwell when a scrum five metres out from the Glenstal line saw scrumhalf Oisin Mangan, who had a fine game in such a pivotal position despite been the youngest player on the pitch, brilliantly dive over but his effort was ruled out for the scrum having pushed over the regulated 1.5 metres.

Rockwell will now play Castletroy College on Thursday, February 27 in Limerick. Attention will now focus on the Rockwell College senior team who win take on Limerick’s Saint Munchin’s in the winner takes all Munster schools second round clash at Tom Clifford Park on Thursday February 13 at 2.30pm.