Missed chances costly as Tipp are lucky to earn draw 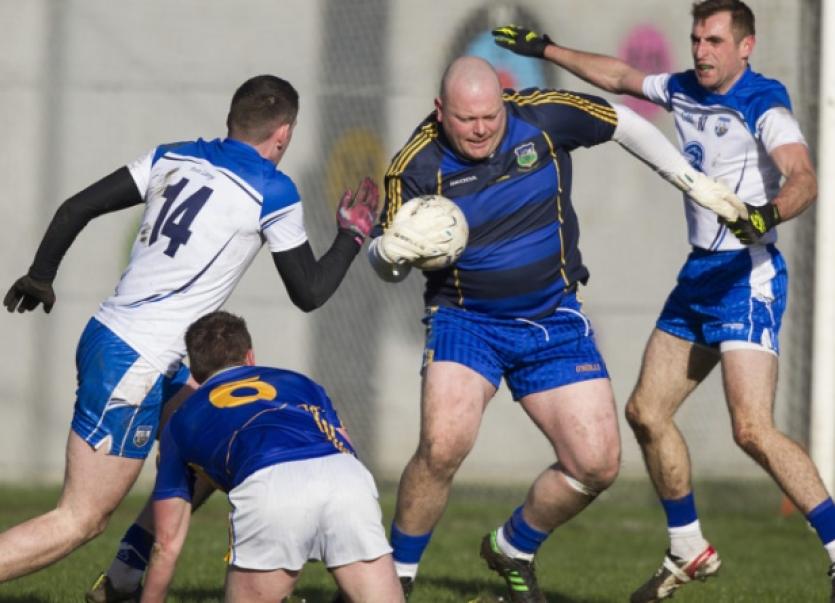 A share of the spoils at  Clonmel on Sunday last was the end result but one felt at the final whistle that the home side were the more relieved.

A share of the spoils at  Clonmel on Sunday last was the end result but one felt at the final whistle that the home side were the more relieved.

Six minutes into the second half it looked like Tipperary were a certainty for a second league win of the Division Four campaign. Five points without reply immediately after the interval put Tipp three clear, and with a strong wind behind them it looked like there was only one result on the cards. But full credit to Waterford for their huge effort in clawing their way back into the game and had Paul Whyte’s long range effort at the death gone over no one could have argued with a win for Na Deise.

Conditions on the day at Clonmel Sportsfield were perfect and Waterford had the benefit of a stiff breeze into the town end for the opening half. Within 30 seconds midfielder Shane Aherne had the visitors ahead with a good point from the left but Tipp were back on terms when Philip Austin pointed after a pass from  Conal McCullough.

A disappointing first half was to be tit-for-tat for the most part with the sides level on four occasions.

A Paul Whyte free edged Waterford in front after seven minutes before Michael Quinlivan levelled it at 0-2 apiece with a point on the run following a pass from wing-back Ger Mulhair.

With Shane Aherne winning the majority of the kick-outs Waterford were enjoying the greater possession but eight first half wides were wasteful. Whyte with a second free edged them ahead in the 10th minute. While points may have been in short  supply there were a couple of notable goal chances with Conor Sweeney (twice) and Philip Austin bringing good saves from Stephen Enright in the Waterford goal and Paul Fitzgerald in turn denying Shane Aherne.

Barry Grogan with a free tied up the scores in the 22nd minute at 0-3 each.

JJ Hutchinson restored the advantage for Waterford before, once again, Enright somehow got a hand to a Conor Sweeney effort to force it over the crossbar for an equalising point..

Sweeney then put Tipp in front for the first time in the 26th minute and with half-time approaching and the breeze to come in the second half Tipp would have been happy with the scoreboard if little else at this juncture.

However, then came the game’s only goal. A high ball from the impressive Waterford centre-back Shane Briggs was fielded by Liam O Lionán in the Tipp goalmouth and when he in turn was dragged to the ground the resultant penalty was converted by Paul Whyte. It was the second penalty conceded by Tipp in two weeks and it left them trailing at the break 0-5 to 1-4.

Tipp’s best period in the game came on the resumption and a handful of points in six minutes put them in the ascendancy. The injection of pace from Tipp yielded good points from play from McCullough, Quinlivan and Brian Fox with two frees in between from Grogan and a particularly sweet effort from outside the 45 from Sweeney.

But Tipp would only score twice again in the remaining 30 minutes of play, one a free from 40 metres from Sweeney and then a Philip Austin point six minutes from time.

For the most of the second period Waterford were the better team, driving at Tipp in waves and their subs adding more to the game than the Tipp replacements.

JJ Hutchinson had an excellent point in the 47th minute but Tipp were still three points to the good with 12 minutes remaining. However four good points in six minutes, three of them from man of the match Paul Whyte and the other from JJ Hutchinson gave the visitors a lead by the hour mark and things looked ominous for Tipp before Michael Quinlivan sent Philip Austin in for the game’s final score in the 66th minute.

Deep in injury time the 490 attendance held its breath as Whyte’s effort from 30 metres just drifted high and wide. Tipp had just about survived.

Best for Tipp on the day were John Coughlan, Paddy Codd, Peter Acheson, Philip Austin while Conor Sweeney and Barry Grogan had their good moments.