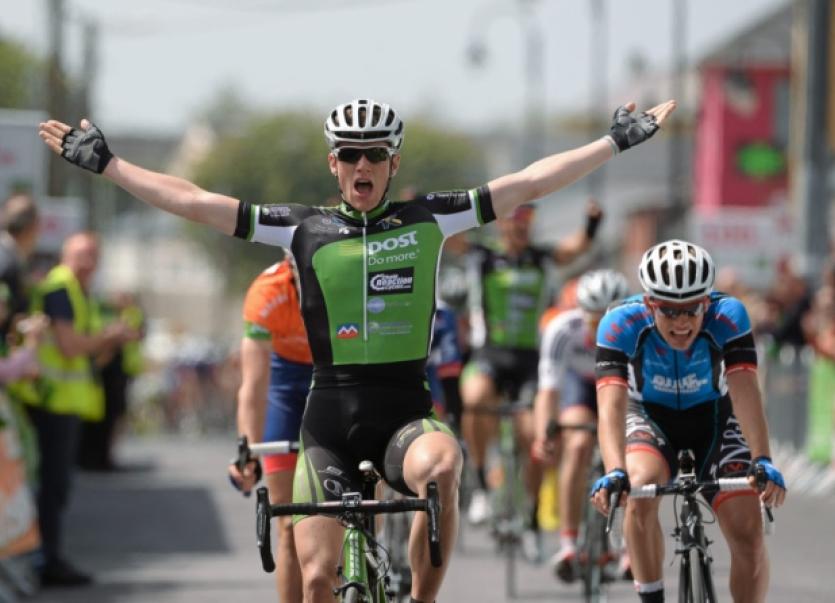 Eight challenging stages, comprised of over 1260 kilometres and 36 categorised climbs, the route of what promises to be an aggressive and exciting An Post Rás was launched at Dublin’s GPO.

Eight challenging stages, comprised of over 1260 kilometres and 36 categorised climbs, the route of what promises to be an aggressive and exciting An Post Rás was launched at Dublin’s GPO.

The 2014 edition of the race will see Carrick on Suir play host to the stage six finish, with the next day’s racing beginning from there the following morning.

The action kicks off in Dunboyne on Sunday May 18 and takes an anticlockwise route around Ireland with Roscommon, Lisdoonvarna, Charleville, Cahirciveen, Clonakilty, Carrick on Suir, Baltinglass and Skerries all hosting stage end finishes.

The race profile strikes a balance between flat fast roads, undulating sections and tough climbs, with a total of five category one mountains and five category two ascents set to shake up the peloton.

Climbers will seek to make the most of stages such as Charleville to Cahirciveen on day four, which features no less than ten categorised ascent and the stage six, summit finish on Seskin Hill in Carrick on Suir.

However, race organiser Tony Campbell believes a good balance has been struck and that one group of riders will not be favoured over another.“I wouldn’t say it is a pure climber’s race,” he states. “There are climbs, but there are also a lot of fast roads where plenty of aggressive racing will be done. I think it is more or less one for a good, hard strong rider, a guy who can push up over the hills and who is also good when the speed is on. I think it’s an An Post Rás for the strong all-rounder.

In some ways it is similar to last year’s route. The first two stages are mainly flat; although day two has a category one climb near the finish. The speed will really be on during those stages and I think the effects of that will tell on the third and fourth day when riders start to get worn out.”

Campbell added that the fourth stage from Charleville in Cork into Cahirciveen, Co Kerry has the potential to really shake up the peloton.

“The day around Cahirciveen is going to be a hard stage. It is over 180 kilometres that day and will be difficult. The climb up Seskin Hill will also be important, but there will be plenty of opportunity throughout the eight days for attacks. The speed and the distance will tell - they will make things hard.”

Former An Post rider Ronan McLaughlin was on hand to launch this year’s route alongside fellow Irish riders Roger Aiken and Connor McConvey. McLaughlin, who came agonisingly close to winning a stage following a heroic solo ride into his hometown in Bundoran in 2012, is putting together a Donegal based outfit for the race.