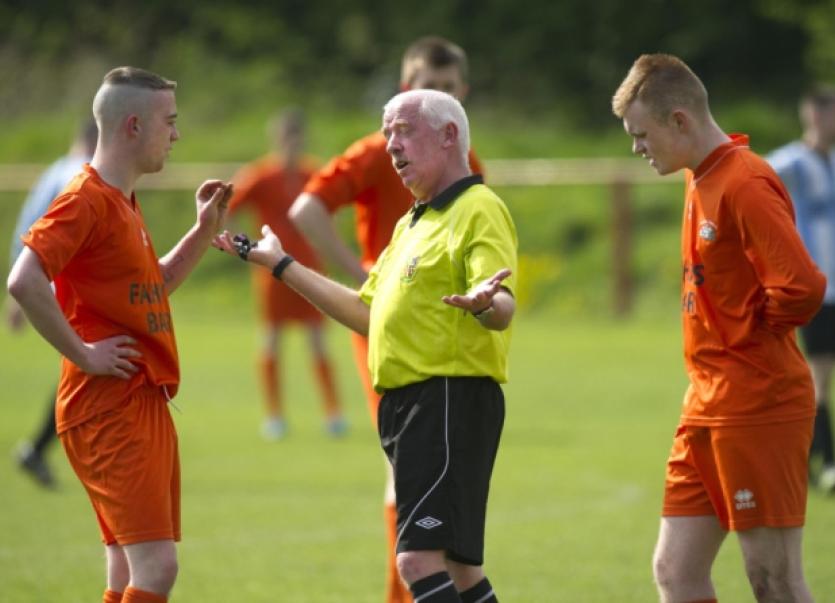 Arch enemies St. Michael’s and Clonmel Town are through to this year’s Tipperary Cup final; Saints keeping alive a dream of sack of silverware by season’s end.

Arch enemies St. Michael’s and Clonmel Town are through to this year’s Tipperary Cup final; Saints keeping alive a dream of sack of silverware by season’s end.

Fresh from the high of their FAI semi-final victory, Saints took on Third Division Donohill last Wednesday evening, and looked ripe for a giant killing when the lower league team took a shock lead after only six minutes of play.

The Saints Thomas Fahy was adjudged to have taken down Donohill’s Joe Shanahan, and Shanahan himself stood up to coolly fire home from the penalty spot.

Normal service was resumed however, only two minutes later, when David Slattery equalised as his cross come shot deceived all including the Donohill keeper to nestle in the back of the net and bring the sides level.

Six minutes later, Slattery turned provider for Saint’s International centre half Paul Breen, and Breen scored with a powerful header after advancing upfield for a corner kick. Just after the half hour mark, St. Michael’s made it three as John O Brien poked a Dean Thompson cross home, and eight minutes later, Slattery got his second to put the home side in complete control of the tie.

The life went out of the game for the early part of the second period as Michael’s dominated possession without ever looking to really push on and add more, and they were stung 20 minutes from time when they conceded a second penalty and Shanahan once again scored to reduce the lead to two goals.

But, like all good teams, they picked up through the gears when needed and restored their three goal advantage when Slattery finished off his hat trick 13 minutes before time.

Right from the kick off, the Saints attacked again, and O’Brien got his second to make it six goals to two, which was the final score of the night, and set up St. Michael’s for another final in this spectacular year for the Tipperary Town club.

Clonmel Town did their part in setting up the cup final all neutrals will be eagerly anticipating when they easily disposed of the gallant Bansha Celtic side at the Complex on Sunday afternoon.

The early exchanges were scrappy as Town blew off the cobwebs from the last few weeks, and didn’t really create any clear chances until the half hour mark wen Barry Ryan had a close range effort saved. They had by then however, clearly marked their intentions, and took the lead from the penalty spot seven minutes before the break, when David Mc Grath’s header was punched off the line by a Celtic defender and Tony Scully slotted home the resultant spot kick.

A goal and a man to the good, Town dominated the second period, but it took until the 68th minute before they scored their second, when Shane Flynn’s pinpoint cross was headed home by David McGrath.

A minute later, Richie Crowe picked up the ball out on the wing, and cut inside beating a number of Celtic defenders before firing home, to give Town an unassailable lead, and nine minutes from time, Barry Ryan capped a fine performance with a goal of his own to give his side an easy win, and the promise of silverware to compete for before the end of the season.